For the people of Essoyes, a village in southern Champagne, the Year of Renoir, which was celebrated last year, capped years of planning, hard work, and determined effort that culminated in the opening of the Renoir family home to the public in June 2017.

And according to this mayor, looking back at the history of the Renoir family in this town, which was their summer home for more than 100 years, is also a way of looking forward.

The history of the Renoir family in Essoyes (pronounced Ess-wah) actually began not with a Renoir at all, but in 1859, with a baby girl born to a mother of modest means who was abandoned by the father of the baby before the child had reached the age of 2. Forced to go to Paris to find work as a seamstress, the mother left the child in Essoyes, to be raised by relatives.

At the age of 15, Aline Charigot—for that was the girl’s name–joined her mother in Paris, and it is there that she met her future husband: Pierre-Auguste Renoir, twenty years her senior, and from a far more sophisticated world.

Aline Charigot may have been a simple country girl, but she knew what was important to her. And in addition to Renoir, who eventually became her husband, and her children, her home village of Essoyes was also important to her. In 1888 she managed to convince the painter to come to Essoyes for part of the summer. Though he initially balked, once he got there he was pleased enough with what he found that the couple and their young son, Pierre—who later became a well-known actor of stage and screen—stayed on, into the autumn months.

That was the beginning of a summer home for the Renoirs. And although after 1907 they were forced to spend the winter months in the south of France due to his worsening rheumatoid arthritis, Renoir continued to spend the summer months in Essoyes until the last year of his life. For their son Jean, the future film director, Essoyes became a beloved, almost a sacred, place of comfort, solace, and happiness. “For me there is no other village like it in the world,” he wrote in his memoir, Renoir, My Father. “There I lived the most beautiful years of my childhood….”

In 1896 the Renoirs purchased a home in the town, and ten years later Renoir built a studio at the far end of the garden. And until 2012, Renoirs continued to live in the house: the last inhabitant was Sophie Renoir, a great-granddaughter of the painter. In 2011 she offered to sell the house to the village of Essoyes at a price of 600,000 euros, which presented this little village with quite a dilemma. “It was a dilemma because we didn’t have that kind of money,” says Cintrat. “And there was no negotiating the price.” So the mayor approached the presidents of the regional and departmental councils, and the prefect. “I told them, we want to buy the house, but we don’t have enough money, what can we do? And from the beginning, all three levels of government—the department, the region, the state—said ‘You have to buy it, you have to. We’ll help you.’ And they did.” 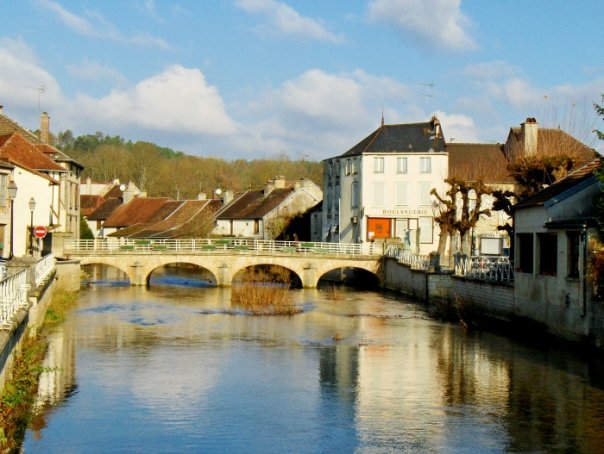 Buying the house was only the first step, though. With the purchase completed in 2013, the rest of the project began. Since 2011 the painter’s studio, and a small but well-executed and informative interpretive center that tells the story of the Renoir family in Essoyes has been open to the public. “But people always wanted to see the house the family lived in too,” says Cintrat. “It was the thing everyone asked about.”

And so in 2013 the next stage of the project began. The house had been well maintained and lived in continuously, but there were still structural matters that needed to be attended to, and in order to comply with regulations for public sites, an elevator had to be installed.

The other thing people coming to Essoyes would always have liked to see, of course, were original Renoir works of art. Until last summer, this was not possible. But plans for the renovation included strict requirements for climate control and security so that original works of art could be borrowed and safely displayed in the home. (The first such exhibition featured two paintings and a bust of Madame Renoir, which were on loan from museums in Cagnes sur Mer, Rouen, and Bordeaux for the summer of 2017, in celebration of the Year of Renoir.)

All of this required significant fundraising: but with the help of the department, the region, and the state—as well as many private donations, and the patronage of various businesses and associations, including the Fondation de Patrimoine—the project was underway. The last major thrust of the work began in the summer of 2016, and on June 3, 2017, right on schedule, the doors of the newly restored Renoir home were opened to the public.

What’s in store for 2018? This summer Essoyes will be one of several villages in the Côte des Bar to host the Route du Champagne en Fête, an annual celebration of the area’s viticulture, which is scheduled this year for July 28-29. And of course the Renoir home and the interpretive center are also open to the public. This year, each Monday and Friday at 3 pm, through July 27, visitors can enjoy an enactment of Aline Renoir and her son Pierre at the very site where Renoir painted “Les Laveuses” (The Washerwomen”), and eavesdrop on them as Aline chats with two of Renoir’s Essoyenne models, Louise and Anne, and they discuss the differences between city life and country life in 1900 (in French of course!). Reservations are required, details provided here.

Also, four times a week Bernard Pharisien, local historian and great-nephew of Gabrielle, Renoir’s favorite model, will present matinales in which he tells stories of the Renoir family in Essoyes every Sat/Sun/Monday/Tuesday. (These walking tours, conducted in French, are free, and begin at 10:30 a.m. at the Place de l’Eglise.)

The Renoir home, which has been carefully restored to give the impression that the Renoirs have just stepped out of the house for a stroll is a pleasure to visit. Impressive attention to detail—books lying open, music on the piano, toys on the floor of the living room—effectively convey the effect and an audiotour available in six languages, including English, provides additional detail. And for those who enjoy communing with the spirits of great souls who have inhabited a place, there are other friendly “ghosts” in Essoyes as well. For in addition to enjoying the company of their neighbors and local friends, the Renoirs often hosted visitors from Paris, including such art world luminaries as Ambroise Vollard, Henri Matisse, and Aristide Maillol.

The town itself is, as Cintrat says with humble pride, “A very pleasant place. Essoyes is a nice, clean village, with lots of flowers.”  In fact on entering the village, visitors can see that Essoyes is honored with the three-flower designation (out of a maximum of four) from the Comité Nationale des Villes et Villages Fleuris, which is a designation awarded to villages not only for their attention to floral decoration and general quality of life but, as the committee’s website explains, is “above all a symbol of welcome.” In addition to the Renoir home and interpretive center, the town offers a number of trails where hikers can stand in some of the spots where Renoir painted his paintings, with reproductions of those paintings helpfully displayed on easels. Most of the sites have changed very little, allowing visitors to Essoyes to enjoy a vivid sense of having stepped into the past.