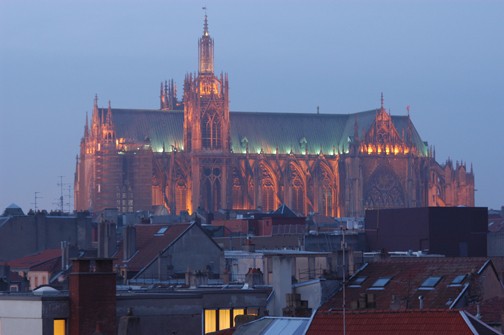 Home of the new Pompidou Center annex in northeastern France, the surprising city of Metz is well worth a visit on its own.

A vibrant and beguiling modern city, Metz wears its many layers of history gracefully. Its original site, on a hill at the confluence of the Moselle and Seille rivers in what is now Lorraine, was already fortified in 110 BC, by a Celtic tribe called the Mediomatrici. Today some of the city’s loveliest walks and viewpoints surround that spot, where a gorgeous Gothic cathedral built of golden stone overlooks the bridges and islands of the many-branched Moselle, whose peaceful waters are ruffled only by a flock of well-fed swans.

The Romans called the city Dividorum, but it eventually took the name of the Mediomatrici, shortened first to Mettis and then to Metz. (Although the French pronounce its name as “mess”, the city is anything but.) From the beginning it was an important trade center, at the juncture of two great Roman roads, the north-south route linking Trier to Lyon and the east-west road from Strasbourg to Soissons. By the 2nd century AD Metz was flourishing, with a population of 40,000, an amphitheater, a forum and several public baths, with water brought from some 14 miles away by aqueduct—train travelers will pass some impressive remaining arches just outside of town.

After the fall of Rome Metz was repeatedly sacked by Vandals and Huns before coming under the rule of the Merovingian Franks; on the death of King Clovis in 511, his territory was divided among his sons, and Metz became part of Austrasie, the “eastern territories” extending from Champagne to Bavaria, including parts of today’s Belgium and Luxembourg. In 561 King Sigisbert chose Metz as his capital, launching a brilliant era that extended though the 9th-century reign of Charlemagne, who also favored the city.

Already converted to Christianity in the 3rd century, the city was eventually taken over by its bishops. Virtual princes with the right to raise taxes, make laws and execute justice, the bishops ruled from the 9th to the 13th century, when a rising class of wealthy patrician families called the Paraiges seized power.

Metz thrived for some 300 years as a republic, a free city within the Holy Roman Empire headed by a maître-échevin chosen from among the leading families. So wealthy that they lent large sums to the dukes of Lorraine, the kings of France and even the Holy Roman emperor, the Paraiges contributed to the city’s fame as a banking center, earning it a medieval nickname, Metz la Riche.

A 16th-century siege by Henri II brought Metz under French control, and it remained French until the Germans took the city, along with the rest of Lorraine and Alsace, in the 1870 Franco-Prussian War. German until 1918, Metz was redeveloped and fortified with a ring of sturdy forts. Reverting to France after World War I, the city was again occupied by the Germans from 1940 to November 1944, when they finally surrendered after a long and fiercely fought battle.

Despite its kaleidoscopic and war-ravaged history, today’s Metz is a lively, upbeat city. The city is enlivened both by a youthful population, thanks to its university, and a sunny appearance, thanks to its golden color—most of the city center is built in a local honey-hued limestone called pierre de Jaumont.

The Old Town is a compact, largely pedestrian area centered on the Place d’Armes, an 18th-century square flanked by the Hôtel de Ville and the former guardhouse that now houses the Office de Tourisme, and dominated by the Cathedral of Saint Etienne.

Visitors enter the cathedral through the ornate Portal of the Virgin. Among its scores of statues stands Saint Clément, the city’s first bishop, whom legend credits with ridding the city of a monster called the Graoully (pronounced growly) by capturing the beast with his priestly stole and drowning it in the Seille. The saint is depicted holding a chain attached to an unhappy looking little dragon. A large, colorful effigy of the Graoully, housed in the cathedral’s crypt, was once carried through the city in annual processions, an event described by 16th-century writer and temporary Metz resident François Rabelais in his comic masterpiece Gargantua et Pantagruel.

The cathedral is nicknamed God’s Lantern, and you’ll know why the moment you step inside. With the second-highest nave in France, the soaring interior is flooded with jewel-colored light from an astonishing expanse of stained glass, and the effect, especially on a sunny day, is dazzling. The earliest windows, dating from the 13th century, display the unforgettable, intense blue called bleu de Chartres along with vivid touches of red and gold; others windows date from the 14th to the 20th centuries, including several designed by Marc Chagall.

On the adjoining Place de Chambre, Metz’s covered market is housed in an imposing U-shaped building. Begun in 1785 as the bishop’s palace, it was left unfinished after the Revolution and converted to a covered market in the early 19th century. Filled with vegetable stands, butchers, fishmongers, cheese stands, stalls overflowing with regional and exotic specialties, and a popular soup restaurant, it’s a magnet for Messins, as the city’s inhabitants are called.

Behind the cathedral are the Musées de la Cour d’Or, a group of museums housed in an integrated complex of buildings—a 17th-century convent, a 15th-century granary and vestiges of the northern Roman baths. It’s a must for its renowned archeological collection, with an astonishing wealth of Gallo-Roman treasures unearthed in the region, from fragile glassware to monumental statuary. The medieval and Renaissance periods are also well represented, with mostly religious painting and sculpture, but also a series of 13th-century painted wooden ceilings adorned with an entire bestiary of fantastic and fabulous creatures. Upstairs, the Beaux-Arts section includes paintings by Delacroix, Corot, Moreau and Dufy.

Several short bridges, including a quaint wooden footbridge, link the Old Town to the island called Petit Saulcy, a name derived from the willow trees (saules) that once lined its marshy banks. The island’s classically austere Place de la Comédie boasts one of France’s oldest theaters, and beside it looms the massive gray stone Temple Neuf, a 1901 neo-Romanesque German Protestant church.

The riverbanks are lined with pleasant walks; one leads to the Esplanade, a terraced garden with fountains, gardens, and lovely views across the river. Nearby is Saint Pierre aux Nonnains, which claims to be France’s oldest church—built as the palestra or gymnasium of the southern Roman baths, it became a chapel in the 7th century, and today is used for exhibits and concerts, along with the neighboring 13th-century Chapelle des Templiers.

The Esplanade is just one of Metz’s many gardens—the city has won both national and European competitions for its flower gardens. Another pocket of greenery surrounds the Porte Serpenoise, a reconstruction of one of the oldest city gates. Its inscriptions provide one of the few visible references to Metz’s strife-filled history—one side reads: “On October 13, 1870, Metz, betrayed, was delivered by [General] Bazaine to the Germans, who entered the city through this gate.” The other side gives the followup: “On November 18, 1918, French troops freed Metz from the German yoke and after 48 years of cruel separation re-entered the city.”

The rue Serpenoise, the main Roman north-south road or decumanus, is now a bustling pedestrian shopping street leading to the Place Saint Jacques, the site of the Roman forum and still a meeting place abuzz with sidewalk cafés and restaurants. Just north of it lies the former cardo, or east-west road, with the strange name of En Fournirue. Several street names in the Old Town reflect the trades once practiced there—En Fournirue is named for the fours, or forges, of goldsmiths and blacksmiths; En Chaplerue was for hatters. The unusual form of the names reflects their translation into German, then back into French.

Many of the Old Town’s streets are narrow and cobbled, with medieval houses and massive arched carriage doors. The Place Saint Louis is another relic of the Middle Ages, with some houses built on 14th- to 16th-century arcades that once housed moneychangers. The Porte des Allemands is a powerful vestige of medieval military architecture; named for a German religious and military order, the Porte was a small fortress that guarded Metz’s eastern frontier. Straddling the Seille River, it was both a city gate and a fortified bridge, with a double set of twin towers dating from the 13th and 15th centuries. Seriously damaged during the fighting in 1944, it was restored in 1946.

If you arrive by train your first sight of Metz will be the German district’s most flamboyant landmark, the 1908 train station. A neo-Romanesque extravaganza covered with sculpted ornamentation, it was part of the extensive development of a whole new district. Called the Quartier Imperial, the area is characterized by broad avenues, step-gabled and half-timbered houses, red sandstone public buildings, and touches of Art Nouveau and its German variant, Jugendstil.

Metz’s gastronomy shows a similar German influence; portions are enormous, and regional dishes include, besides the creamy quiche Lorraine, heavily smoked charcuterie and hearty servings of well-seasoned sauteed potatoes. The mirabelle, a small yellow plum, is the most famous of Lorraine specialties—pâtissiers bake them into tarts, confiseurs make candies and jams with them, liquoristes distill them into eau de vie, and the city holds a Mirabelle Festival every summer.

While the Moselle region is known for its white and rosé wines, the brewers of Lorraine also offer a whole range of artisanal beers including Loup Blond, Noiraude, and Duchesse de Lorraine. As with the food, servings are generous, and one brasserie serves beer in glasses so large that they come propped up in a wooden holder. If you can lift it, it’s just the thing with which to toast the enchanting, generous city of Metz.

Originally published in the May 2010 issue of France Today; updated in September 2012