Paris Mayor Bertrand Delanoë has been on a mission to improve the city so adored by its residents and some 30 million annual visitors. Events like Paris Plages bring the beach to those who can’t depart en vacances; the popular Velib’ bicycle lending program has now been exported worldwide; and major renovation projects are breathing new life into the ancient city. One of these transformative projects is the Berges de Seine, which was unveiled this past summer on the river’s Left Bank between the Orsay Museum and the Pont de l’Alma. This quay used to be a congested roadway, but now its traffic consists of urbanites on two-wheels, roller blades, or foot.

Spanning 2.4 kilometres, the promenade is lined with gourmet cafes, including the second outpost of Rosa Bonheur, the popular guinguette in Parc des Buttes Chaumont. To entertain the kids, a climbing wall– complete with ropes and footholds– has been created on the foundation of the Invalides Bridge. There’s also a giant slate wall with buckets of colorful chalk for budding Picassos to draw. Mazes are etched onto the pavement, along with a running track, where fitness coaches can be booked, and stopwatches provided to time your 100-metre sprint.

Lounge areas– called “Zzz”s and reminiscent of shipping containers– can be booked free of charge for chilling out. It’s also possible to reserve a free teepee to host a child’s birthday party. Especially fabulous is the floating garden, located near the Pont d’Alma. Five connected barges offer chaise lounges for watching the river traffic while surrounded by landscaped greenery.

The Berges is also the setting for a slew of events, like photo exhibits, dance soirees, Tai Chi sessions, and farmer’s markets, like the recent “Fabulous Fete” which celebrated eating local. 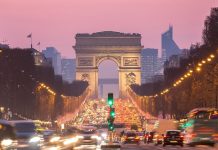