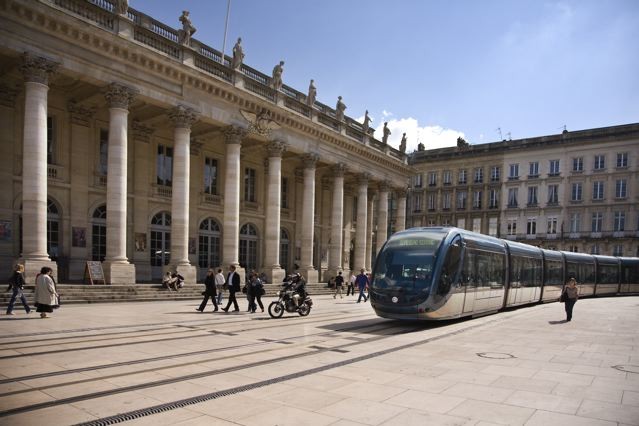 The last thing I expected to happen when I moved to Bordeaux in 2005 was to be stopped in the street and thanked for liberating France (I was six years old and living in rural Indiana when that happened). But Marcel, a little old man who spotted me on my new doorstep, extended a hand, flashed a smile, and said, “Bienvenue, et merci pour nous avoir sauvés en quarante-cinq.” (Welcome, and thank you for saving us in ’45.) A few days later he stopped by to give me a tattered photocopy of his book about his own wartime adventures, including two daring escapes from forced labor camps in Germany.

It was the warmth of such encounters that confirmed my feeling about Bordeaux as the ideal place to relocate after 20 years of shivering in the wetness of London. Local shopkeepers usually assume I am English but they are delighted when I interrupt to correct them. There is an eager curiosity about Americans, and we are still a rarity in this part of France.

Bordeaux might best be called a sensible city, right-sized and sunny, and just far enough off the beaten track to be free of the pressures of the modern world—and to discourage drop-in, fly-by visitors “doing Europe”. Anyone arriving from another urban setting will be surprised at how upbeat and courteous the people seem, no doubt the result of the sunshine and the wine. At the slightest imposition, they will smile and say, “Pas de souci,” the French equivalent of “No problem.”

The ninth-largest city in France, with a population of some 213,000 souls (with suburbs, 630,000), Bordeaux is 355 miles southwest of Paris, only a three-hour trip on the high-speed TGV train. It sits astride the Garonne River, just below the point where the Garonne meets the Dordogne to form the Gironde estuary, which widens to meet the Atlantic Ocean 60 miles north. It was a major port for hundreds of years, and traces of that maritime past are apparent everywhere.

Only in the past few decades has the cargo trade dried up, but the older generations remember well the maritime atmosphere. “I grew up with the sound of foghorns in my ears,” recalls Michel Suffran, a respected local novelist and a neighbor who invited me to tea shortly after my arrival. Sitting in his library lined with books and papers spilling onto every flat surface, he admitted to bouts of nostalgia for Old Bordeaux.

The city has been rich from the wine trade since its Roman days, but its heyday came in the 18th and 19th centuries, when it was not only the wealthiest city in France, but, according to Stendhal, “without contest the most beautiful city in Europe”. The aging Goya, who fled to Bordeaux in 1824 to escape Spanish oppression, joined the city’s vibrant artistic community and produced family portraits of the grande bourgeoisie for big commissions. An imposing statue of him stands in the newly restored Place du Chapelet, overlooking the church of Notre Dame, where Bordeaux’s finest are still baptized, wed and honored at funerals—Goya’s own funeral was held there in 1828.

The great arc of golden stone merchant houses that line the Garonne’s Left Bank are testimony to the genius of French urban renewal in the 18th century, when most were built, and again during the last few years, when they were scrubbed and renovated along with most of the four-mile waterfront. Flowerbeds were planted and old warehouses converted into restaurants and cafés that now overlook the river as rollerbladers whizz by.

A major element in the 21st-century facelift was the sleek, silent, low-fare tramway system that now serves both city and suburbs. The tram is simple enough for any visitor to use, but in fact the inner city’s layout is sufficiently compact to make it a walker’s paradise. The main attractions are no more than a 20- to 30-minute stroll from any point, and the rue Sainte Catherine—which follows the trace of an ancient Roman road—is Europe’s longest pedestrian shopping street.

In 2007 Bordeaux’s core was classified as a UNESCO World Heritage site. Its centerpiece is the ornate crescent of the 18th-century Place de la Bourse, its mansard roofs and gold-trimmed balconies looking out over a tall bronze fountain of the Three Graces—all now reflected in the marvelous new “Water Mirror”, a vast flat rectangle of inch-deep water that ebbs, flows, bubbles and shoots up clouds of mist to the delight of children splashing through it barefoot in summer.

Just up the street is the asymmetrical Place du Parlement, another 18th-century jewel, and farther along the superb Grand Théâtre, completed in 1776, and now home to an orchestra and opera company offering honest provincial fare and sometimes more.

The 11th/12th-century Saint André cathedral was the site of the lavish wedding of Eleanor of Aquitaine to Louis VII of France; as her dowry, she brought to Louis’s realm not only Aquitaine but the fiefdoms of Périgord, Limousin, Poitou, Gascony and much more. After 15 years of this mismatched marriage—he was austere and ascetic, she was not—he divorced her. Two months later, she married Henry Plantagenet, taking her dowry with her. Her new husband soon became King Henry II of England, and for the next 300 years Bordeaux, Aquitaine and the rest were ruled by England. France retook the vast territory only in 1453.

Not far from the cathedral is the Musée des Arts Décoratifs, a little gem in a charming street with some lovely antique shops, and the Musée des Beaux-Arts, which houses works by Titian, Rubens, Breughel, Delacroix and the city’s native son Odilon Redon, among many others. The contemporary art museum, the CAPC, is installed in a vast colonial-era warehouse with a spectacular arched nave.

Part of Bordeaux’s charm comes from its rather sleepy character—residents sometimes call it La Belle Endormie, or Sleeping Beauty. Nowhere is the laid-back character more evident than in the Jardin Public, a beautiful, rambling park and botanical garden just down a cobblestone lane from where I live. Ducks, geese and swans waddle out of the lake to snap at day-old baguettes available free from nearby bakeries. A look at the crowd here reveals the Bordeaux population in microcosm—multiracial, multicultural and egalitarian. Old Portuguese immigrants gather on benches as some of Bordeaux’s most elegant ladies stroll the gravel paths in heels and silks and satins. Children run free. The lawn is dotted with small groups of young people chatting, singing or reading, and lovers intertwine shamelessly in the grass.

Across the road is the Place des Quinconces, site of a spectacular fountain, a monument to the Girondins, the revolutionaries who ended up on the guillotine. Bronze hippocamps (half horse, half fish) shoot streams of water from their snouts as the sun lights up the spray. The creatures seem to dance in the water.

Not ten minutes away is the Palais Gallien, a section of a 200 AD Roman arena surviving amid modern apartment blocks. About one-sixth of the 15,000-seat structure remains standing; the rest was demolished by mindless real estate developers during the post-war boom. In the 1960s the Bordeaux authorities came to their senses and realized what a historical treasure they had. Demolition was halted and what’s left of the site is now protected.

Conversely, the city has been unable to rid itself of a giant monument to German engineering, a Nazi submarine base on the edge of town. The sinister concrete structure, blackened by time, contains eleven U-boat bays. The roof is 20 feet thick, designed to deflect Allied bombs, which it did very effectively for the final three years of the war. The structure survives unscathed today as a literally indestructible reminder of World War II. The city has gamely tried to make it work as a performing arts center but essentially it remains a huge carbuncle.

One monumental remnant that did escape demolition is the 15th-century Porte de la Grosse Cloche, a sturdy bell- and clock-tower that is a local sentimental favorite. From there it’s a short walk to Napoleon’s red-brick Pont de Pierre, the first bridge built across the Garonne, for a stroll to the Right Bank and a look back at the golden sweep of the crescent city.

Originally published in the November 2008 issue of France Today; updated in June 2011