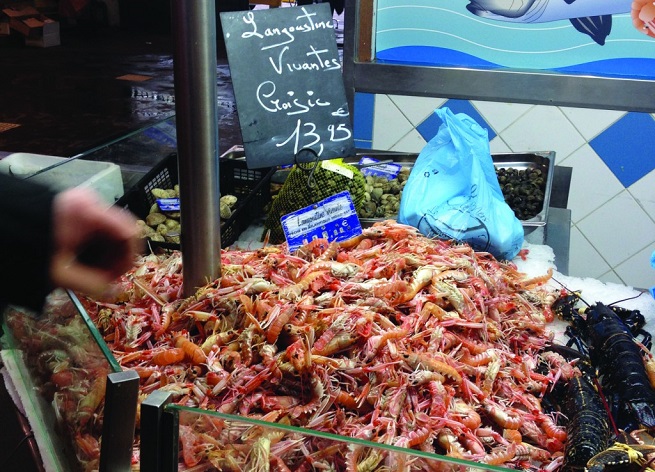 Early on a grey Wednesday, no amount of April showers can deter the people of Nantes from their most important task of the day. Flocking to Talensac market, a covered arcade in the heart of the island city (pictured above), chefs and housewives alike echo each other’s cries in their bartering for the cream of the market’s crop – but there’s not really any need to shout, as there’s no shortage of fantastic produce. Nevertheless, proud vendors chant their slogans with gusto, like mantras to the faith connecting this multicultural town – a belief in fresh, local food that’s carefully grown and respectfully prepared.

The exuberant Christophe François leads the way through mountains of glossy fruit and vegetables, trays of langoustines and hen eggs with downy feathers still stuck to their smooth shells. He excitably points out the stalls’ finest wares with an effusive pride that’s clearly respected and recognised by the locals. As the owner and head chef of one of the city’s best-loved restaurants, Les Chants d’Avril, Christophe seems to know everyone in Nantes. Unable to pass a counter without grasping the hand of its presiding fishmonger or fruit seller and exchanging greetings, he’s a local legend for the pure fact that his food – which he describes as ‘bistronomique’, somewhere in between bistro and gastronomic cuisine – celebrates and supports Nantes’s local produce and its manufacturers.

He points at me. “Tu aimes le maquereau?” Not waiting for a reply, he spots the finest mackerel catch of the day, its sleek, silver-striped skin glinting under the arcade’s white lights, slippery from its crushed-ice bed. Christophe gently takes the carefully wrapped parcel of fish, once again shaking the vendor’s hand and promising to transform it into a delicious, slap-up lunch if I pay his restaurant a visit that afternoon. Of course, I did. And wrapped in an airy sesame batter and drizzled with a fragrant mint pesto, it was by far the best mackerel I’ve ever tasted.

Although my baptism into the culinary culture of Nantes involved fresh fish, vegetables and a breakfast galette, historically the city has been famed for its sweeter exports – namely its Berlingot boiled sweets and emblematic all-butter biscuits, whose factories were originally based on this waterfront. The port city was a hub of commerce throughout the 18th century, during which slaving regrettably played a big part, as did the sugar trade. The marriage of sugar cane and Breton butter inevitably led to the petit-beurre biscuits for which legendary manufacturer LU is famed.

Nantes is an eclectic city, built on a history of innovation and flux. Its creative outputs are its biggest draw today, the artistic Île de Nantes leaping and bounding into the future. This eclipses its reputation as a gastronomic destination, but it is this lust for ingenuity that is filtering down to the fusional approach of its next generation of restaurateurs.