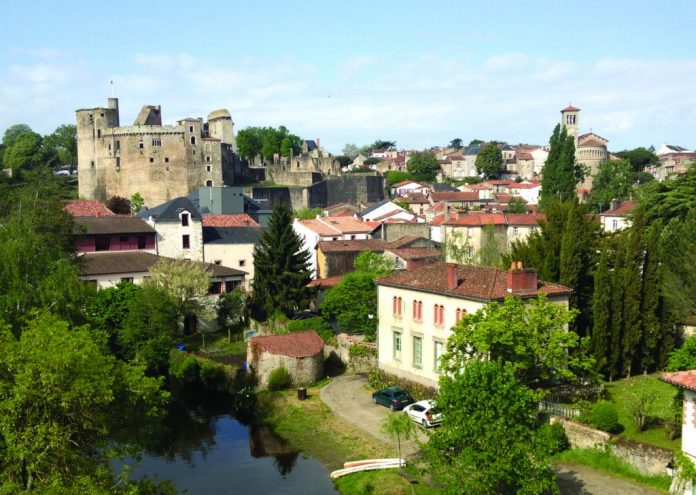 One visitor to Clisson in 1811 described it as ‘heaven on earth’ in a letter to its artist-creator, François-Frédéric Lemot. This Italianate town concealed amid the vineyards of Nantes certainly does have a touch of the ethereal to it, having been moulded into a living neo-Classical painting by Lemot, the official sculptor to Napoleon I.

By rail, it only takes half an hour to reach the Vallée de Clisson from Nantes and the train rolls through emerald-green vineyards and lush farmland on the way – yet, on arrival, you wonder whether you accidentally boarded the train to Tuscany. Though originally a medieval town built in traditional Breton style, it was almost entirely burnt to the ground in the counterrevolutionary civil war of the Vendée, which took place between 1793 and 1796. The devastated town, including the charred remains of its imposing medieval castle, was revived in the early 19th century by Lemot and two art patrons, the Cacault brothers.

Lyon-born Lemot had lived in Italy, where he studied the Old Masters, as was the vogue for the artists of the day. However, after the French Revolution, he was exiled from Italy due to fears that the rebellion would spread to Italian soil. Upon accompanying the Cacault brothers to Clisson in 1805, Lemot was inspired to recreate a Tuscan village there – the stunning scenery resurrected the latent Italian in him, despite or perhaps because of the town’s decrepit state. “Upon arriving in Clisson, I was so surprised and astonished by the great character of the landscape that I believed I had been transported to Italy,” he recalled in 1812. At the time, this may have only been a product of Lemot’s highly creative imagination, but he set to work to make this vision a reality.

I journeyed to Clisson to explore its medieval origins, entanglement in the civil war and transformation into a ‘Little Italy’ that continues to charm today’s visitors. Over the course of a day, I travelled back to the Middle Ages and the era of 19th-century Romanticism, and entered deepest Tuscany, all without leaving France.

BACK TO THE DARK AGES

My introduction to Clisson begins at Les Halles, the covered, timber-framed, 15th-century market in the town centre, which miraculously survived the war of the Vendée as it was used as a refuge by the Republicans. An important regional market still takes place here every Friday, plus concerts and medieval fairs. It still serves as a shelter, too – pigeons coo contentedly from straw nests in the rafters, safe from the reach of any earthbound beings.

Navigating winding, uphill streets – led by my tour guide, Thierry – I’m greeted by the town’s crowing glory: its castle, the Château de Clisson. Soaring high above the rooftops, it once held a significant tactical position between the three major provinces of Anjou, Brittany and Poitou, providing a defensive stronghold against each at different times throughout history. Built in the 13th century, it first belonged to Olivier V of Clisson, whose family flag still flies defiantly from its turrets bearing the motto, “Pour ce qu’il me plest”. This translates from an archaic dialect to ‘For what I like’, summing up Olivier’s fickle nature – during the Hundred Years War, his loyalty flitted between France and England, based on whichever was prepared to offer him the most generous bribe. The French king Charles VI eventually made the highest bid, granting Olivier a house in Paris and turning him so violently against les rosbifs that, as Thierry informs me with a sly grin, he earned the nickname ‘Butcher of the English’.

THE AGE OF ROMANTICS

Lemot bought and restored the dilapidated castle in 1811, marvelling at its illustrious past and romantic, overgrown ruins. Tiptoeing down a steep grassy slope to the river that lies at the castle’s feet, I get my first taste of the Clisson as imagined by Lemot. Situated at the confluence of two rivers – the Sèvre Nantaise and the Moine – the town is divided by a torrent of water, which is crossed by the Pont de la Vallée, an ancient, stone-cobbled bridge that was once the main commercial route into town from Nantes.

From this vantage point, the lushness of the tree-laden riverbanks takes your breath away, though Thierry confesses that the verdancy of the landscape is not entirely down to Mother Nature. Enthralled by the Baroque paintings of Nicolas Poussin, Lemot ordered a mass planting of trees and shrubbery, with the ever-artistic aim of creating the impression of a real-life oil painting. Tuscan elements peek out from the treetops – a campanile here, a red tiled roof there and, a little way upstream, a Romanesque viaduct.

We head towards the latter, sticking close to the riverside and scrambling up a steep flight of stone steps. From the viaduct, the view of Clisson is magnificent. A morning’s worth of patchy grey skies suddenly gives way to glorious sunshine – Thierry remarks that the weather could not be more perfect for beholding this idyllic vista, and I reply that the Roman gods must be smiling down on us.

Crossing the viaduct, we reach Lemot’s master creation: an Italianate villa he built as his home (although the artist died before it reached completion), in a prime plot of land overlooking the valley. La Garenne Lemot sits snugly in a wooded park based on 18th-century English gardens, which are thick with green vegetation and perfumed by cowslips and bluebells. This is the kind of unbridled romanticism for which France, with its courtly tradition of neatly landscaped gardens, has never been famed. I could have been fooled into believing that I was in an English country estate, if it hadn’t been for the odd Renaissance-inspired statue, folly or poetry-engraved rock. We emerge from the undergrowth into a clearing and finally see the villa itself. A long grassy avenue leads to a semi-circle of Roman pillars surrounding the neo-Palladian house, which is only separated from the valley by a sandy path and low stone wall.

Ambling back towards the town centre, we pass a number of Tuscan-inspired houses, roofed with terracotta tiles, their doors and windows embellished by archways of thin, decorative red bricks. The Italian illusion is almost complete, coming to fruition at our final tour stop: the Église Notre Dame de Clisson.

Inspired by Rome’s Basilica Santi Giovanni e Paolo, the town’s main church was built in 1888, at the height of France’s late 19th-century revival of the Catholic Church. The architecture favours Italian Renaissance style over contemporary neo-Gothic, extending into the 1930s with a fresco painted behind the altar featuring all the “Catholic celebrities of France”, as Thierry calls the nation’s patron saints. The fresco’s traditional Italian technique may recall a bygone era, but one detail gives away its 20th century origins. The Unknown Soldier, whose undying mortality has glowed from beneath the Arc de Triomphe since the end of World War 1, stands proudly among the Disciples.

And that is Clisson: achingly picturesque and romantic on the surface, like the glossy veneer of an oil painting, yet with a historical depth which enriches its every detail. The more grizzly chapters of Clisson’s history were remedied by Lemot, who elevated the town to celestial heights while preserving its connections to a rich medieval past. To truly experience this elegant town, simply surrender yourself to being seduced by its timeless romanticism.