Home Travel Château de Commarque: A Discovery in the Dordogne 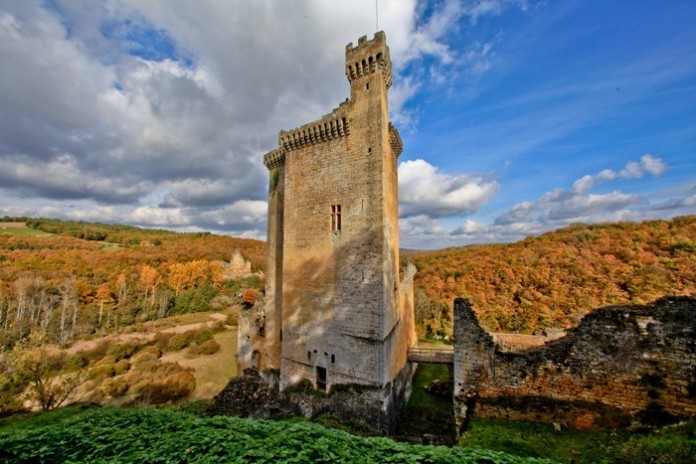 Some of the most surprising sights in France are found at the end of a small country road. Such is the case with Château de Commarque, located not far from Les Eyzies de Tayac in the Dordogne département. But wait! After the car park, one goes by foot down a long rugged dirt path, the sign says 600 meters. Out in the clearing of the Valley of the Beune, the ruin of the fortified tower rises high into the sky around ruins of the village. Yes, with endurance, one can climb all the way to the top of the fortress for a panoramic view over the countryside.

In 1972 the Comte de Commarque purchased the ruins, the historic birthplace of his family for six generations. In 2001, following archaeological research and restoration work that continues today, the château was opened to the public by the last family member, Hubert de Commarque. The keep or donjon was erected in 1380. Ruins of a fortified village, including knight’s tower, chapel and houses that were covered in vegetation for over 350 years, were also discovered.

A natural spring brought prehistoric man of the Magdalenian era to this valley where they carved animals and created over 150 images in a cave beneath the château. Though the cave can’t be visited, there is an informative video projected in the donjon that describes and depicts the ancient artifacts. Later era troglodyte dwellings are preserved in a rock wall near the château.

Hubert de Commarque, with the aid of Monuments Historiques, has opened the site, half in ruin, to offer visitors a chance to explore this special place hidden in an isolated valley, far from any sign of the modern world.

Open annually from early April to the end of the Toussaint school holiday vacation. Adult admission is 7,50 euros.

Want to visit The Dordogne? Join France Today on one of our luxury tours of Delightful Dordogne