Home Travel Travel to the Coastal Resort of Biarritz 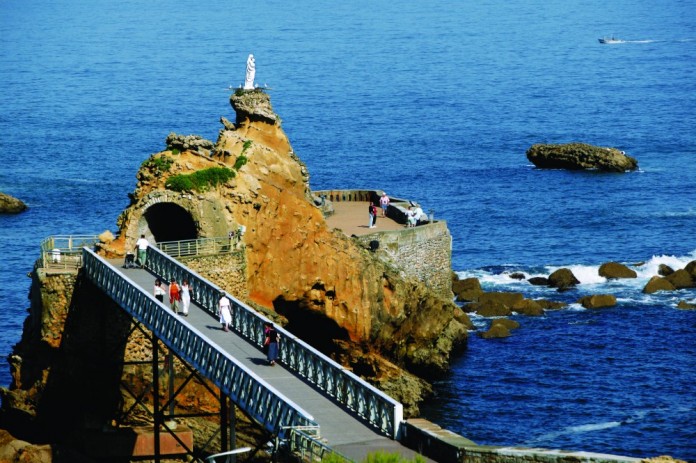 Biarritz, it rhymes with glitz. Could that be why so many people who’ve never actually been there still insist on telling you about its faded fin de siècle glamour? Was it the 4,000 US service men and women who attended a post WW2 ‘Army University’ in Biarritz that coloured so many latter-day opinions? Or is it because this iconic French coastal city features in so many histories of the Belle Époque? It became super fashionable in the late-1800s, after Empress Eugénie built an opulent palace right on the seashore – prime frontline. It’s hard to be certain from where these reputations emerge, but one thing’s for sure, since those days the city has really moved on. Fast forward over a century and you really need to visit this intriguing destination to get the true 21st century picture.

Today, this noble grande dame of the seaside has swapped her stuffy Victorian habits for a more contemporary and cool persona. It’s an intoxicating blend – European surfer hip meets well-heeled French panache, adorned with a piquant sprinkle of Basque culture.

Perched above sublime golden-sand beaches and dramatic rocky coves, Biarritz gazes west towards the New World. On arrival you get a whiff of the tangy sea air well before you meet the ocean. Then, turn a corner, and there they are – the famed Atlantic rollers stretching right across the bay. No wonder they create some of the best surfing conditions in Europe. Come rain or shine, be sure to bring your board and your suit for some fun waves – the action takes place all along this coastline – but in the city itself La Plage de la Côte des Basques is the big draw. Or if you retired your board and your body some years ago, then just relax in the stylish beach-front Café de la Plage at sunset and watch the silhouetted surfers cruising in, again and again.

Summer is popular with families and the surf-set so try September and October if you want to avoid the crowds. There will still be plenty of atmosphere and rumour has it that the weather is the most settled during the late season. But this is the Atlantic, after all, and the Basque countryside is green so it must rain here, n’est-ce pas? Luckily, if you do hit some damp weather, assuming you’re not paddling a board, there’s still plenty to do in town. Museums, cultural attractions and shopping opportunities abound.

Behind the main seafront, on the wonderfully named Avenue de l’Impératrice, you will find the extraordinary Orthodox Russian Church. A landmark building in a city of contrasting architectures, the Church, with its famed blue dome, is a reminder of a pre-World War 1 era when Russian nobility arrived on the Nord Express train from St Petersburg. Eventually, over 2,000 Russian citizens became resident here.

For something much more contemporary take a taxi over to the Cité de l’Océan, an architectural prize-winning building which houses an informative series of exhibits about the marine habitat and local maritime history. A double ticket gets you into the Musée de la Mer, an aquarium in the centre of town. And when you’ve had enough fishy experiences for one day you can head inland a few hundred yards, to visit The Musée Historique de Biarritz or The Chocolate Museum.

Behind the promenades and esplanades of the seaside resort lie some chic shopping opportunities, including many smart independent fashion, homewear and gift boutiques – Avenue de Verdun and Avenue Victor Hugo are good hunting grounds. Boutique 64 in Rue Gambetta would be the place to shop for fashion souvenirs with a Basque flavour (64 is the number of the French département where the city is located). And if you can’t find what you want in Biarritz’s smaller boutiques there’s always the renowned Galeries Lafayette department store. No wonder the Biarritzaises look so chic.

When it comes to gastronomy you are spoiled by the sheer diversity. Don’t leave without sampling the fantastic seafood, caught locally, as fresh as fresh can be. Try Chez Albert at the charming Port des Pêcheurs for authentic seafood à la Basquaise. At lunch try one of the cafés and bars serving pintxos, the local take on tapas (remember, you are only 30 minutes from the Spanish border from here) – Bar Jean near the market is popular with locals. Take home some traditional Basque liqueur chocolates with black cherry jam centres for your sweet-toothed friends.

For me, the best way to savour the atmosphere of this city is to rise early on a bright breezy autumnal morning with the gulls riding the air currents and the early-bird surfers venturing the waves. Walk the coastal path from the lighthouse on the northerly headland, following the steps and footpaths near the cliffs, along the Quai de la Grande Plage, past the quaint old port, around the coves to the Point Atalaye. This dramatic promontory leads, via an exciting over-the-waves walkway, to the Rocher de la Vierge, a white statue of the Virgin Mary, erected in 1864 to commemorate the miraculous survival of local fishermen during a tempest.

This walk encapsulates the contrasting moods and themes of Biarritz, the mix of old and new architecture, youthful surfers watched by genteel retired residents, the golden sands of the beaches below the verdant greens and pinks of hydrangea, broom and tamarisk. It’s not a long walk by any means but by day or night, in rough seas or smooth there is always something to catch the eye, and at night it’s another world of starry lights and inky seas.

Train: TGV from Paris to Bordeaux, then local train to Biarritz.

More to discover in the region: Saint-Jean-de-Luz, the Basque country, the town of Pau and the Béarn province.