Home Travel Action in the Aude 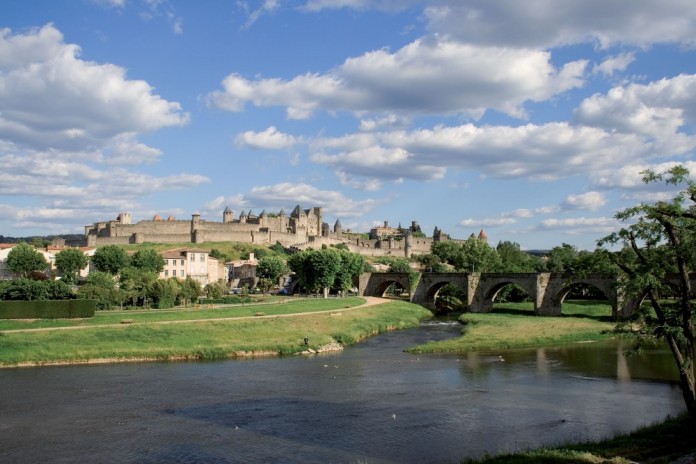 News that a quiet village in the south of France is the only place that will be saved when the world allegedly comes to an end on December 21, 2012 is playing havoc with house prices in the area.

According to several groups of what local residents call “esoterics”, the tiny village of Bugarach, in the Aude department of Languedoc-Roussillon, has been chosen by extraterrestrials as the place to be when Armageddon occurs everywhere else on the winter solstice of next year. The date is said to be the final day of a cycle in the ancient Mayan calendar, and the day on which doomsayers predict earthly civilization will come to an end.

Bugarach, with a population of just 189, sits at the foot of the Pic de Bugarach, the highest mountain in the Corbières winegrowing area. Esoteric followers believe that the peak is an “alien garage”, full of extraterrestrials who are waiting there underground until the end of the world, when they will leave, taking with them any humans who might want to go along.

Surprisingly, the farfetched claims aren’t bolstering house prices. In fact, they are having the opposite effect. Locals say the improbable reports have been very detrimental to the previously unheard-of village in its remote southwestern corner.

Bugarach’s mayor Jean-Pierre Delord is said to be so unhappy he has warned he will call the army to protect the village if thousands of people turn up there on December 21 next year. “If 10,000 people turn up tomorrow, as a village of 200 people we will not be able to cope,” he said recently. “I have informed the regional authorities of our concerns and I want the army to be at hand if necessary, come December 2012.”

Another disgruntled resident is Marie Marselli, a real estate agent at M&M Immobilier in nearby Quillan. The highly unusual prophecies are stopping sales in the area, she says. “You would have thought that this would have been positive publicity for the area, but it hasn’t been. It has put a brake on property sales.”

“People seem to have been put off coming to the area. At the same time sellers don’t want to lower their prices because of the publicity, so we have come to a full stop.”

Indeed, property prices across the Aude, one of five departments in the Languedoc-Roussillon region, appear to be very uniform, with no one sector experiencing greater highs or lows than any other, according to real estate agent Elaine Youngs, who runs the real estate firm Aude Ariège Property.

The Aude is divided into four very different areas: Razès, Corbières, Minervois and the Montagne Noire, with the capital city
of Carcassonne at its center.

Carcassonne is a medieval citadel town with its double ring of ramparts still perfectly intact. Situated in the wide geographic corridor that leads up from the Mediterranean between the Massif Central and the Pyrenees, the town was extremely important strategically and the object of many fierce battles over the centuries. During its long history, Carcassonne has been a Roman town, a Moorish conquest, a feudal stronghold, a Cathar citadel and a frontier fort before finally becoming the tourist honeypot it is today.

Prices in Carcassonne have seen a considerable increase in the last decade, thanks to the area’s popularity with foreigners who travel on the many budget airlines that now fly into the region. Carcassonne, Toulouse and Nîmes airports are all served by low-cost carriers from Paris and a number of British airports, making the trip from the UK and even the US to spend a sojourn in the sun all the easier.

Southwest of Carcassonne the area of Razès is characterized by circular hilltop villages known as circulades. The views from properties in any one of these villages looking out towards the Pyrenees are stunning.

Southeast of Carcassonne, the Corbières area is much wilder and more remote than its westerly neighbor. The beautiful sweeping landscape is frequently punctuated by austere Cathar castles, most of them in ruins, which date to the 13th century.

To the northeast, the Black Mountain sector is a large, very green forested area with a cooler climate than its neighbors. And finally the Minervois, a lot flatter than the rest of the département, includes a stretch of the Mediterranean coast. Both Corbières and Minervois are winegrowing areas, formerly the source of immense quantities of simple table wines, whose reputation for quality is fast on the rise.

Across the board, prices in these areas are down. “It’s been a very difficult three years, with the recession and the exchange rate,” says real estate agent Youngs. “Prices have dropped significantly. Many British people have moved back to the UK, and because the exchange rate is favorable, they have been able to drop their prices and still go back with more than they paid initially. People are taking offers, and pricing more realistically.”

But the situation may now be looking up, she adds: “At the end of last year things did get better, and I hope they are going to go back to being almost normal.” Normal, says Youngs, would be around €180,000 for a three-bedroom village house with a small garden in any one of the quaint hilltop villages in the Razès area, where she has lived for the last ten years.

Modern villas on the outskirts of larger towns go for slightly more, at an average of €190,000, according to figures on www.aude-franceproperty.com, an Internet property website that Youngs also works with. “It’s very difficult to find detached houses with gardens unless your budget is over €250,000,” the website also advises. “It doesn’t matter that you don’t mind being outside a village, it just isn’t the way houses are built here.”

Youngs adds that it is also almost impossible to find a complete ruin to fix up. “It’s very difficult to find a ruin with land, since most of those kinds of properties have largely been taken. They are very much at a premium round here. But there are still a few village houses to renovate.”

However, she warns against trying to make a huge profit out of a renovation project, as many people have done in the past. “The idea of buying a house, doing it up and then making a killing when you sell it just doesn’t work anymore.”