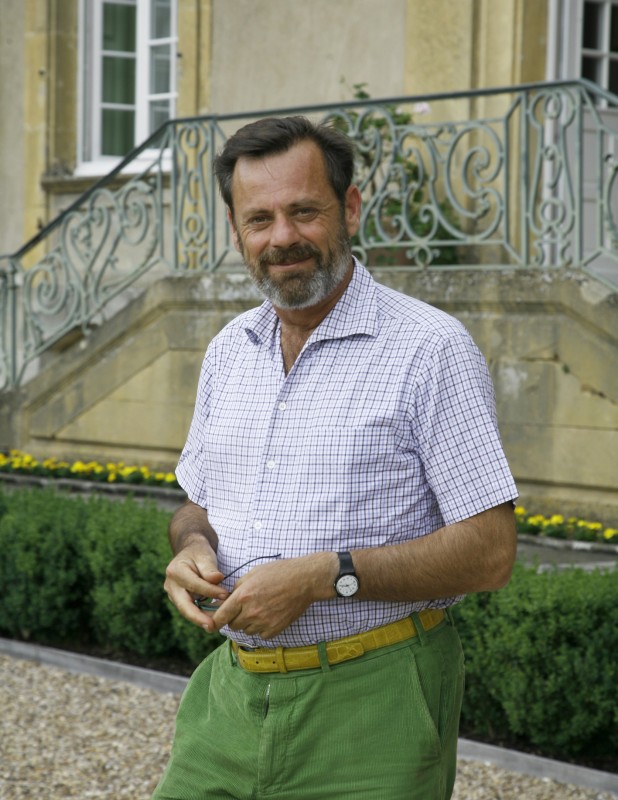 French landscape designer Louis Benech’s enthusiasm for gardens, for making them and talking about them, is boundless. Example: this horticultural magician, in demand all over the world, whiled away a recent Parisian afternoon lecturing to a small group of dedicated garden buffs from an association called Vivaces & Cie-Hardy Perennials & Co.

There was Benech, 51, with his brown beard, earth-toned corduroys and gentleman-farmer allure, ardently sharing tips on composing mixed borders and choosing shrubs. He showed slides from some of the 200 or so gardens he’s created or resurrected in the last 25 years, among them the Tuileries in Paris; the Château de Pange in Lorraine; the gardens that belonged to 19th-century Impressionist artist Gustave Caillebotte near Paris; the terraces of the Hermès Dosan Park flagship store in Seoul, Korea; and the Skoura Palm Grove in Ouarzazate, Morocco. Many of his gardens are strictly private, commissioned by the likes of French art-collecting magnate François Pinault, interior designer Jacques Grange, Monaco’s Princess Caroline and Benech’s friend Christian Louboutin, shoe designer extraordinaire.

The presentation was aimed at fellow garden fanatics, not the botanically-challenged. Plants were introduced by their proper Latin names. Arcane advice was interspersed with loving poetic detail: Flora was labeled “witty”, “happy”, “generous”. The audience, mainly mature ladies in cardigans and sensible shoes, was enthralled. “Tell me about your gardens!” ended Benech, lingering to take questions.

Chortling in the front row was Luc-André Lepage, retired head of the prestigious Lepage nurseries. As president of Vivaces & Cie, he instigated the get-together with his long-time client. “What Louis does is haute couture for gardens. He uses plants the way Christian Lacroix or John Galliano uses fabrics and pleats and embroidery,” says Lepage. “He gives tradition a contemporary tweak.” Yet whatever the special effects-like a blue and silver theme at the Chateau de Pange that replicates the family coat-of-arms-Benech’s landscapes fit seamlessly into their natural surroundings and historical context. Not too formal, not too wild, his gardens are natural and sensual-and more user-friendly than the conceptual “ecological experiments” of some of his peers.

The real key? Benech loves plants. His knowledge of how to harmonize them is vast. “He’s always at nurseries nosing around. He orders long meticulous lists, like a doctor’s prescriptions. Unlike many landscape artists, who treat plants as mere accessories,” says Lepage, “Louis started with his hands in the earth, as a gardener.” And in spite of his distinctions-member of the Royal Horticultural Society, Chevalier de la Légion d’Honneur, leading light of the cutting-edge Chaumont garden festival, among many others-Benech retains that unpretentious identity. His France Today interview-another leisurely garden chat-coincides with the first day of spring. “A momentous day for a gardener!” he exclaims.

There aren’t many signs of the new season in his modestly-appointed offices, located in a gritty part of the capital’s 10th arrondissement-Nature is represented by a couple of unassuming potted plants and Tulipe the cat, who lounges insolently on the piles of project folders and plant catalogs while assistants-Benech leads a team of ten-toil on computers and telephones.

Nor does Benech get much chance to garden these days. He laments, “I feel more like a traveling salesman.” His 30-odd current projects include the grounds of the Trianon Palace luxury hotel in Versailles but also gardens in the United States, Egypt, Portugal and Greece. It’s hectic, yet travel feeds his inspiration: “Each project is an adventure. I love different kinds of people, different kinds of flowers. I get so excited!”

One palpitating prospect: he’s refurbishing the garden next to Saint Louis Cathedral in New Orleans’s French Quarter, a small post-Hurricane Katrina project funded by the Getty Foundation. Benech launches into a long evocative description: “It’s a garden with history. Bishops are buried there-I won’t move them.” But he wants trees to hide storefronts and rooftop antennas. “If we can forget these avatars of modern life, I’ll be very happy.” And he’d like a one-way street reversed to approach the cathedral, making the most of the view. This project is particularly sympathique because it’s New Orleans, “every French boy’s dream”, he says, and because “I love exotic and tropical flowers, and I’m very attracted to the flora there. There are sublime oak trees and some plants probably over 100 years old, as I’ve never seen such big ones. Osmanthus fragrans. An insignificant little Chinese flower with an indescribably wonderful perfume, fresh and sweet. Those I will certainly keep…”

“I planted some in Portugal,” he continues. “The climate there is perfect for this Chinese flower. It goes against one of my basic principles, that I love to use local plants because generally they’re at their best in their original habitat…. Mountain laurel in the U.S. is ten times more beautiful than anywhere else. People are disappointed when I use it there, because it’s ordinary. But it has so many qualities! It’s persistent and grows in the shade. It’s a cousin of the rhododendron, and when you look at the flower it’s astonishing, like a little upside-down parachute, with stamens in the angles….so pretty.”

The way Benech talks, no wonder the owners of the Chateau de Pange chose him over other landscaping candidates. The spellbinding plant descriptions in his proposal “made us dream”, Edith de Pange told the magazine Point de Vue.

Affection for plants ran in his family, Benech says. His landscaping vocation reflects a dual inheritance-architect father and flower-loving mother-plus early instruction from two gardening grandmothers. All through his boarding school days, he says, gardening was his favorite hobby. He grew up on the tree-deprived Ile de Ré, off the French Atlantic coast: “Consequently, when we went to the mainland, I’d hug trees.” He also has dazzling memories of his great-grandmother’s property in Provence where “White California poppies, Romneya coulteri, had invaded a walled garden. I was enchanted. I bathed in the field of poppies. I still plant them everywhere, everywhere I go. A flower as light as a butterfly.”

“I wanted to be a forest engineer,” says Benech. “In France, however, to qualify for the training, you have to be good at math and physics, and I was hopeless.” To fulfill family expectations, young Louis studied law in the early 1980s at Nanterre University, but the very day he got his degree, he was calling around for gardening jobs. After a successful apprenticeship at the venerable Hillier nurseries in Hampshire, England, he returned to France to help serve Hillier’s clients on the Continent. And by 1985, he was head gardener on the Normandy estate of bon-vivant British millionaire Loel Guinness. “I said I wanted the position so I could have fun-he immediately hired me. He was most fond of fast cars and horses, but he did love his garden,” remembers Benech.

And Guinness valued Benech’s blossoming horticultural skills. He lent Louis to friends like Guy and Marie-Hélène de Rothschild, who passed him on to other ruling-class garden-lovers. All by chance, the way Benech tells it, but as his fashionable writer friend Natasha Fraser-Cavassoni points out, “Louis gets the Pinaults and Rothschilds as clients because they’re impressed by his knowledge and touched by his integrity. They know those are priceless qualities.”

In 1990, Benech was “dragged”, as he puts it, into partnership by fellow landscape artist Pascal Cribier for the international competition to renovate the Tuileries gardens. To Benech’s surprise, they won, and there went 1992 to 1997: “I practically lived in the Tuileries. I was behind the excavators every day, making sure tree roots weren’t damaged.” Though leaving little room for creativity, the project made his reputation as a leading landscaper and he set up his agency in Paris.

“I think I’m very lucky,” he sums up. “It’s a love story. Gardens are the most important thing in my life. Without falling into indigestible evangelism, I think gardens are highly spiritual. They disconnect you from much of the ugliness, the speed and the jostling of modern life. I’ve done gardens for hospitals and retirement homes, because there I think it’s vital. For an elderly person, maybe neglected by their family, if they can have the grace of seeing the sun through a beautiful leaf, the beginning of spring-it’s wonderful.”

Besides, “I have fun! I’m still having fun! You can cheat in gardens, but in the best sense of the word, so it’s not a sin! Today we manipulate images with computers-in a garden, you can change perception by playing around with space and color. You can expand or shrink space with color.” Such “cheating” is an essential ingredient of French garden culture, he notes. André Le Nôtre, Versailles’ horticultural hero, “was a gardening genius because of his tricks-effects of distance, optical illusions. He had so much fantasy, but when people try to copy him, they retain only the rigidity and formality.”

Yes to fantasy, but no to trendy gimmicks like garden gnomes. The closest Benech came to such silliness was when François Pinault asked him to flower his huge new Jeff Koons sculpture, Split Rocker: “It dwarfed the house! A garden ogre! I was supposed to calculate how many pansies to put in the beast’s underbelly. I talked him out of displaying it in the garden-it was turning into a sculpture parking lot,” he says. He adds repentantly, “Which wasn’t very nice of me in regard to Jeff. I enjoyed meeting Jeff.”

A private garden in Greece has brought Benech the most amusement lately. “I worked with a lot of native plants, which had to be specially grown because no

one sells them, but also with exotic ones, suited to the conditions. I hope it will be beautiful,” he says. Most important, it will eventually require no watering. “Green is vital, people need green, but we can use species that need minimum water,” Benech insists. “Sustainability isn’t just the current buzzword. It’s the crucial issue of today.”