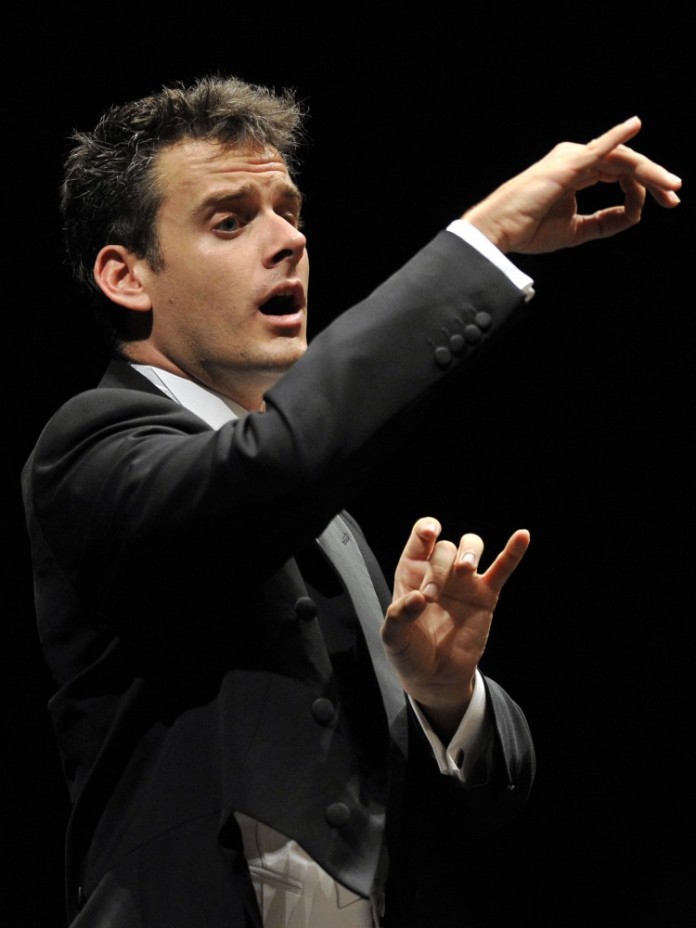 The large picture windows of Philippe Jordan’s office, on an upper floor of the enormous Opéra Bastille building, offer a gorgeous panorama of the Place de la Bastille, the Arsenal boat basin and the dome of the Panthéon across the Seine. “I am really lucky indeed,” acknowledges the conductor, who was appointed music director of the Opéra National de Paris two years ago—at 35, he was the youngest person ever to be tapped for the job. “In this office, I’m surrounded by the city buzz, but I also get to enjoy the silence and peacefulness of the heights.”

A slight Swiss accent betrays the origins of the soft-spoken and smart second-generation conductor. Born in Zurich in 1974, Jordan was steeped in music from his earliest childhood. His father, the late Armin Jordan, was a world-famous conductor, and frequently took his young son to opera rehearsals.“I was fascinated by my father’s work,” he recalls now. “I was thrilled to see him read a score, and when I was nine, I already knew I wanted to do the same thing.” He insists that his father never tried to push him into the music world—quite the contrary. “My parents would have liked me to do something more ‘normal’, but I was determined to do something creative.”

He started with the piano, at age six, and added the violin at eleven. “I’ve been playing the piano for years, and pretty well. I could possibly have had a career as a solo pianist. But I’d rather work with other people,” he explains. But the splendid grand piano in his office still gets plenty of attention. “I keep playing quite often, because I’m able to play the parts of the whole orchestra on the piano—that couldn’t be done with a violin! So it helps me to understand the spirit of the entire score, before I start working with my colleagues.”

Creating music through a social environment has been a key feature of Jordan’s meteoric rise. After earning his diploma in piano at the Zurich Conservatory, he studied theory and composition with the Swiss composer Hans Ulrich Lehmann, and while still a student worked as an assistant to Jeffrey Tate for Wagner’s Ring Cycle at the Châtelet Theater in Paris.

His own career started in earnest the old-fashioned way, as Kapellmeister of the Ulm Stadttheater. In 1998 he moved to the Deutsche Staatsoper in Berlin, as assistant to conductor and music director Daniel Barenboim, who soon became his mentor. “I think he is the greatest musician alive,” says Jordan, “and I learned a lot from him, probably most of the things I know. I learned from him to ask questions rather than give answers: how should the music sound? What kind of harmony should we reach? What is the truth behind the score? All these questions now guide my work.”

If as a child he was impressed by the solitude of the conductor, standing alone in front of the orchestra, he now knows he’s just a part of the whole. “Being a conductor is like being an architect: you need to be both an artist and engineer, while working in a highly social environment. A conductor must guide, form and let things happen. Magic can’t be decided, you know. It depends on too many elements. But when it does happen, wow!”

Traveling across Europe and America was also a necessary experience for him, in order to make a name for himself. “It was difficult, in the early years of my career, to free myself of my father’s aura. That’s why I tried to stay away from the countries where he was extremely famous, like France and Switzerland, and tried to make my own way in Germany and Austria.” And so he did, as chief conductor of the Graz Opera and the Graz Philharmonic Orchestra and principal guest conductor of the Berlin Staatsoper, among other things. And he added conducting engagements for both operas—the Glyndebourne Festival, the Royal Opera House at Covent Garden, the Salzburg Festival, the Met in New York, the Houston Grand Opera—and symphony orchestras, including the Berlin, Vienna and New York Philharmonics. In 2008/2009 he conducted Wagner’s complete Ring Cycle for the Zurich Opera.

But the apple doesn’t fall far from the tree. In 2009 he was named music director of the Opéra National de Paris, where his father had previously worked. It was a stellar achievement for such a young conductor, who assigned himself a mission: “play some good music and display some fine acting. And believe it or not, it’s not always that simple!”

After two years on the job, he has won both critical and public acclaim. But the 37-year-old keeps a cool head: “I had the chance to work with the orchestra twice before my nomination. That was already a good base before joining them.” With 15 years of experience behind him, he also acknowledges that it was the right time for him to step up into a world-class institution. “The Opéra de Paris has everything a conductor could wish for, including major financial means, two magnificent opera houses and a wonderful team to work with. The Opéra Bastille is a perfect toy to play with!” His only wish for change at the Opéra Garnier: that he could remove the carpeting, to improve the acoustic. The job also offered him one more plus: “I’m relieved I can now stay in Paris and sleep in my own bed more often. I was getting tired of traveling all over Europe so often.”

Now settled in, at least for the next seven years—his original contract has just been extended to 2018—Jordan says he now has the time to delve into his passions, the first being Richard Wagner. He arrived just in time to conduct the Paris Opera’s first complete Ring Cycle in more than half a century, carrying it off brilliantly despite the seriously flawed staging by Günter Krämer.

Next year, he will make his debut at the Bayreuth Festival, the Wagnerian Mecca, with the opera Parsifal. And in 2013, the bicentennial of Wagner’s birth, he will conduct a reprise of all four operas of the Ring Cycle, in repertory from January to May, and in June all four over the course of one week—a feat not accomplished at the Paris Opera since 1957. “During a performance, I have a mix of various feelings: responsibility towards the music you love, a little bit of stress, but also moments of joy when you’re overwhelmed by a perfect symphony of sounds. Personally, I really trust Wagner to make me feel that joy.”

This season, however, his schedule includes very different works. In October he made his opera debuta t La Scala in Milan with Richard Strauss’s Der Rosenkavalier. At the Paris Opera he will conduct Verdi’s La Forza del Destino (Nov 14–Dec 17), followed by Debussy’s Pelléas et Mélisande, Mozart’s Don Giovanni and Strauss’s Arabella. “As music director of the Opéra, I can’t just focus on my own tastes,” he says. “I need to know the whole repertoire to please everyone. But I’d like to present new creations too, such as works by Bruno Mantovani, for example. But I don’t want to present contemporary music just for the sake of it—I’d really need to believe in it before anything else.”

Still full of dreams, despite his many achievements, Jordan says he hopes one day to compose his own operas, a long-term project that could lead him “towards something more”. But be prepared for a surprise if you ask him what he thinks is the most perfect sound. “You know, there are no words to explain music,” he says. “It is the most abstract kind of art, even though it emerges from the natural world. And as such, silence is the key element; it is the highest level of music, something really spiritual. I’m really influenced by nature. When I go walking in the country, I’m trying to get as far as possible from city noise. And in this silence, I’m feeling much closer to the true sound of music.” Take the word of a maestro.

Originally published in the December 2011 issue of France Today.