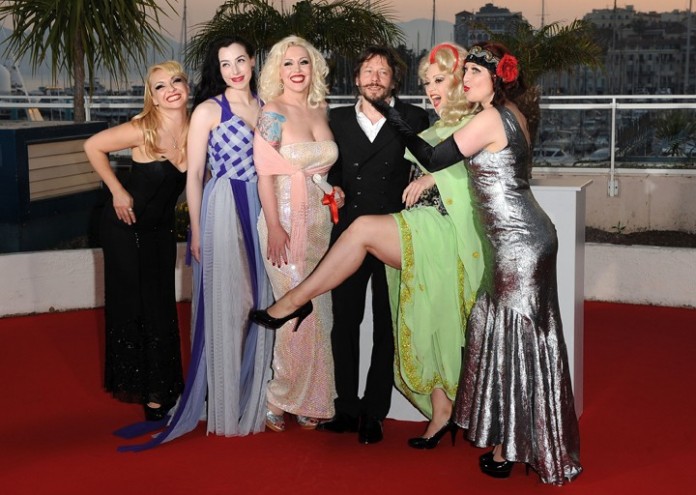 It’s the story of a former big-time Parisian TV producer who left it all behind. At forty-something, he’s a bit of a loser, but now he’s desperately trying to make a comeback with a troupe of American “New Burlesque” strippers, taking them on tour in the French provinces but promising them a booking in Paris.

Conceived as an homage to femininity, Tournée (On Tour) is a intentionally chaotic, lighthearted, effervescent film, co-written and directed by Mathieu Amalric, who also stars in the movie as the struggling producer. Not only did the film win the hearts of the critics at last May’s Cannes Film Festival, but Amalric also won the prestigious Best Director award for his fourth feature film.

This might seems like a surprise, since Amalric has been hailed as one of the finest actors of the new generation of French cinema, ever since his 1996 debut in Comment Je Me Suis Disputé…Ma Vie Sexuelle (My Sex Life… or How I Got into an Argument) by Arnaud Despleschin. “I’ve always been attracted to directing, ever since I was seventeen,” he says during an interview with journalists in Cannes. Now, about to be 45 in October, he’s slightly disheveled, in jeans and an open shirt, puffing nervously on a cigarette. “Being an actor is a gift of life for me, but it wasn’t planned. Plus, it’s not often that you get to let loose, be an animal,” he says with a laugh. “Being an actor lets you do that, and you even get paid very well for it!”

Amalric is one of those actors who excel at being likeable, even when he’s playing a villain. American audiences may recall him as a laconic, poker-faced bad guy in the 2008 James Bond film Quantum of Solace. The year before that, Amalric shot into the international spotlight with his remarkable performance in Julian Schnabel’s 2007 The Diving Bell and the Butterfly, based on the true story of Elle magazine editor Jean-Dominique Bauby, who suffered a stroke that left him with “locked-in syndrome”—he could no longer speak, but found a way of communicating by blinking his left eyelid, the only part of his body that he could control.

Offscreen, Amalric talks a blue streak, cracks jokes, and uses slang as if he were talking to bunch of friends instead of strangers with notebooks, occasionally punctuating his infectiously enthusiastic monologue with self-deprecating humor.

So how did he come to befriend the troupe of five playful, voluptuously endowed reallife American strippers who star in Tournée? “It actually started with Colette,” he says, referring to the French writer. “I was looking for something that resonated like one of her works called L’Envers du Music-hall (The Flip Side of the Music Hall), which she wrote during the time she freed herself from her life with her husband Willy, and fell in love with a woman, Missy, who did music hall numbers, bared her breasts—and the American New Burlesque had all of that!”

In search of inspiration for a Gallic version that would capture the backstage spirit of Bob Fosse’s All That Jazz, Amalric viewed as many shows as he could, then set out for California to see the New Burlesque—an American revival movement of the 1990s that combines striptease with theater and dance, and great acts of the 1950s with garage and punk-rock music.

In Tournée, New Burlesque is described by one of the actresses as “women doing shows for women,” which includes everything from traditional feathers-and-pasties acts to a more rambunctious bump and grind while eating dollar bills. The performers—with names like Mimi Le Meaux, Kitten on the Keys, and Dirty Martini—switch back and forth from English to French, amused and bewildered by the local customs as they make their way through dreary port towns and shabby hotels in provincial France.

Asked how important this element of American/French culture clash was to his script, Amalric is unequivocal. “Funnily enough, the American sense of joy and extravagance was the closest thing I could find to the spirit of Colette! Americans have a way of managing melancholy that is extremely different from the European approach. People here almost find it suspicious if you keep saying things like ‘I love you’ or a friendly ‘Hi, how are you?’ No, in Europe, we’ve got to have problems, we must suffer,” Amalric says with a grin.

Another culture-clash issue is that the troupe performs their wildly exuberant dance numbers with an obvious acceptance of their generously fleshy curves.

“There’s something courageous about the refusal to have what is called today a ‘perfect body’. There’s a standard sameness now— Photoshop is everywhere! Gala photographed me recently,” Amalric says with a smile, speaking of the weekly French gossip magazine, “and there I was with very white teeth! I like my yellow teeth!”

Amalric adds that he has always been fascinated by the lives of nomadic show-business troupes, as well as by the job of a producer. The character he plays in the movie, the mustachioed dandy Joachim Zand (Zand is his journalist mother’s maiden name) is divorced and has lost touch with his kids. He becomes increasingly tense, then enraged when he realizes that his showbiz friends will no longer do him any favors. Yet, every night there’s plenty of joy in the wings. “He feeds on the energy of those girls, he lives on it, and they protect him,” Amalric explains. “I wanted the audience to be with Joachim, backstage, to feel that exhilaration from his point of view.”

What’s next for the actor and director? “I’m on the set of Chicken with Plums in Berlin,” he says, working with Marjane Satrapi, the Iranian-born comic-strip artist, screenwriter and director of Persepolis. Along with Amalric, the cast of the new film, a live-action adaptation of Satrapi’s 2004 comic-strip album Poulet aux Prunes, includes Isabella Rossellini, Chiara Mastroianni, Jamel Debbouze and Maria de Medeiros. “I have no script to learn,” says Amalric. “I’m playing a guy that wants to die. It’s not very complicated to play because everyone has that in him.” After that, the actor goes straight into another film with his longtime friend Despleschin, the director of Ma Vie Sexuelle.

Amalric pauses and sits back in his chair. “Somehow, I can’t disassociate wanting to be an actor with the traumas of adolescence,” he muses. Then suddenly, he lights up, all smiles. “You know, there’s something so much more interesting about 45-year-old men. 45! It’s been such a long time that I’ve been waiting to be that age!”

Originally published in the September 2010 issue of France Today.