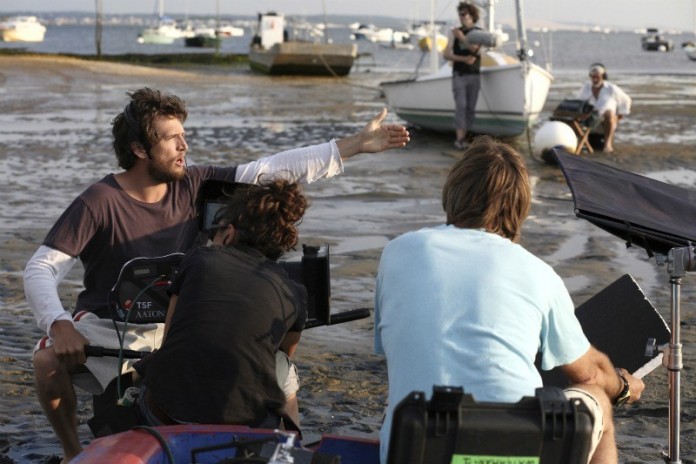 You’ll have a hard time not falling in love with his smile. French beau gosse Guillaume Canet has fast become a favorite of French femmes. Thanks to his raw talent and lady-killer looks, legions of female fans are jealous of his fiancée, Academy Award-winning actress Marion Cotillard. But he’s hardly a vacuous playboy. In just a few years and with only a handful of films, 38-year-old Canet has proven himself as a fine actor and an even better director, acclaimed last year for the stunningly successful Les Petits Mouchoirs (Little White Lies). Quite an accomplishment for a young man who started out as a rider for show horses.

Born near Paris in 1973, Canet is the only son in a family of horse breeders who ran a stud farm in Rambouillet. Early on, he developed a passion for riding, and by age 10 he was performing in a circus. At that point his dream was to become a professional show jumper. “Jumping was my destiny. I lived for the horses,” he often says about those years. At 18 he was on the national junior equestrian team, but a nasty accident put an end to his ambitions when his horse missed an obstacle and fell on top of him.

But the misfortune opened the field to a whole new career path. After a brief experience as a stand-up comic, he decided to study at the Cours Florent, France’s top theater school. Acting was a means to an end: “Before being a director I thought it would be interesting to learn to act,” he once pointed out. “I would have to direct actors and therefore understand them, so I went to drama school.” A great admirer of the late Patrick Dewaere (Beau Père, Get Out Your Handkerchiefs), he played a few stage roles and acted in small commercials.

His film breakthrough came with the 1998 crime drama En Plein Coeur (In All Innocence), which earned him a nomination for the César Award as most promising up-and-coming actor. After another compelling turn in the bittersweet fatherhood tale Je Règle Mon Pas Sur le Pas de Mon Père (I Follow in My Father’s Footsteps, 1999), he was discovered by brilliant British director Danny Boyle, who brought him to Hollywood for The Beach (2000). Canet played a French tourist in Thailand, alongside Leonardo DiCaprio and another rising French star, Virginie Ledoyen. The three have remained friends ever since. With that promising acting debut under his belt, Canet decided it was time to step behind the camera. His first film, Mon Idole (Whatever You Say), released in 2002, had its flaws; the second one, Ne Le Dis à Personne (Tell No One), mesmerized critics and remains one of the best French thrillers of the decade. When he won the Best Director César for the film in 2006, the 33-year-old Canet was the youngest filmmaker ever to garner the coveted prize. He won no trophies for his third directing effort, Les Petits Mouchoirs (Little White Lies), but French audiences loved the film, which attracted more than 5 million moviegoers last year.

Love and attraction enter into his fame in more ways than one. Canet’s personal life has long been a major topic for gossip magazines and undoubtedly plays a role in his popularity. He was first married to German-born model and actress Diane Kruger, whom he met in 1999 and wed two years later. But the two stars filed for divorce in 2006, reportedly unable to reconcile marriage and movie careers. Several other women are rumored to have had relationships with him, including TV weathercaster Louise Bourgoin and Carla Bruni in her pre-presidential days.

Since late 2007, Canet has been the companion of Marion Cotillard, who won an Oscar, the César, the Golden Globe and the British Academy award for her role as Edith Piaf in La Vie en Rose (2007). Although he co-starred with Cotillard in Jeux d’Enfants (Love Me If You Dare, 2003), their relationship was long kept secret. “It’s great to be able to talk to someone like Marion, who understands the highs and lows of being an actor and a director,” he said in a recent interview. “Someone who knows the dedication it takes.” On May 19, Cotillard gave birth to their first child, a son named after Marcel Cerdan, the famous boxer and the great love of Piaf’s life.

Now one of France’s most sought-after actors and directors, Canet seems ready for another go at Hollywood. Ten years after The Beach, he was briefly seen in Last Night (2010), a romantic drama starring Keira Knightley, Eva Mendes and Sam Worthington. More important, he is planning to shoot a new film with James Gray (director of Two Lovers and We Own the Night), a US remake of the 2007 thriller Les Liens du Sang, in which he starred with François Cluzet. Others have failed at the Hexagon-to-Hollywood transition, including Matthieu Kassovitz, whose directing turns in Gothika and Babylon A.D. were both flops. But Canet, currently le Petit Prince of French cinema, may find himself at home in both movie kingdoms.

Love Me If You Dare (2003) Starring Canet and Cotillard, this romantic drama is about silly games and true love. Best friends since childhood, Julien and Sophie have an odd relationship based on mischief and extreme dares. As they grow older, their feelings for each other evolve, but new games put their love at risk. A refreshing, highly quirky romantic movie that was the couple’s first collaboration.

Tell No One (2006) After years of anguish following the murder of his cherished wife, Alexandre Beck (played by François Cluzet) receives a mysterious e-mail message that appears to be sent by her, including video showing her seemingly alive and well. Spied on and pursued by mysterious henchmen in his quest to learn more, Beck discovers the shocking truth. With four César awards, including Best Director for Canet and Best Actor for Cluzet, this riveting thriller based on Harlan Coben’s eponymous novel is now scheduled for a US remake.

Little White Lies (2010) In his latest film Canet is behind the camera, not in front. An enormous success in France, Little White Lies (Les Petits Mouchoirs) tells the story of friends who go on summer vacation together only to see their group torn apart by an accident, failing relationships and longstanding pretenses finally too difficult to maintain. Thanks to a brilliant ensemble cast including Cotillard, Cluzet, Jean Dujardin and Benoît Magimel, the film keeps viewers spellbound for almost two and a half hours.