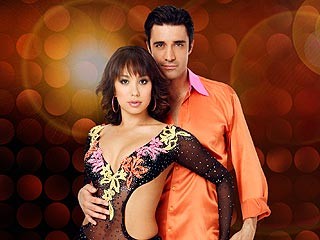 The French actor Gilles Marini is still in the game-and the dance. He and his dancing partner, Cheryl Burke, make up one of five remaining couples competing on the hit show “Dancing with the Stars,” which airs every Monday night on ABC. Despite a recent shoulder injury, the 33-year old Frenchman will be dancing the rumba for America tonight. He was interviewed by France-Amérique.

F-A: What dances have you saved for this evening?

Marini: We’re going to be dancing a rumba and a fox-trot. Since the show began I have wanted to dance the rumba. It’s the lover’s dance, it’s very sensual. We’re going to set the stage on fire!

F-A: You injured yourself while dancing. Is this injury affecting your performance in the competition?

Marini: I injured my shoulder during the first dance, the infamous cha-cha-cha. It’s a bit difficult and painful to lift my arm. I have been receiving cortisone injections to deal with the pain and continue dancing. I can’t have surgery during the filming of the show, because I would need three weeks to recover from surgery. I decided to wait until the season was over for surgery. I don’t want to drop out so late in the game!

F-A: There are only five couples left in the competition. Which couple are you most worried about?

Marini: Melissa Rycroft and Tony Dovolani. Simply because Melissa is a real pro.

F-A: But aren’t all the couples on the show comprised of one amateur and one professional dancer?

Marini: Melissa came into the show at the last minute, because another dancer was injured. She was cast before the producers knew much about her background. She’s one of the best dancers I’ve ever seen. She’s not like me, someone who had never danced before in his life! But she’s adorable. I don’t hold it against her.

F-A: What has been the most difficult dance for you to learn so far?

Marini: The jive! They wanted us to do the jive because no one was able to do it. There were a million steps-a total nightmare to learn. We got good scores, a 9-8-9, but they weren’t the top ones. It was the first time I didn’t finish first. The other couples had easier dances.

F-A: Who decides which couples dance which dances?

Marini: The producers choose the dances and the music.

F-A: As the competition goes on, you’ve been pushed further and further into the spotlight. How are you living with this kind of exposure?

Marini: We’re in very high demand, but it’s all part of the game. There are advantages and disadvantages. I’ve been getting calls for unimaginable roles, opposite the biggest stars in Hollywood. I thought I would have to wait another 5-10 years for access to this sort of a career.

F-A: If the adventure is over tonight, what will your reaction be?

Marini: It doesn’t matter if it ends tonight or in three weeks. I cannot believe how quickly it’s already gone. This show has pushed me into the fast lane!