Home Learn Interviews By the Book 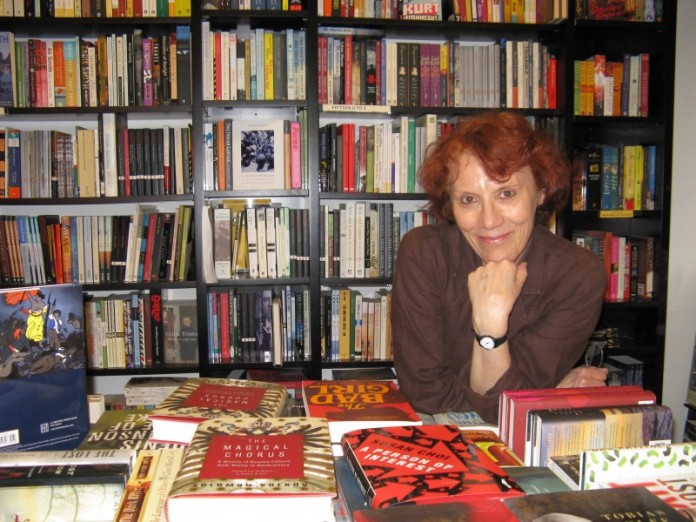 This article was first published in the June 2008 issue of France Today. The 30-year-old bookstore’s fight for financial survival, discussed in the story, has been lost; the Village Voice closed July 31, 2012.

Nestled in St. Germain des Prés on tiny rue Princesse, so narrow it’s practically a pedestrian street, the Village Voice bookshop is surrounded by British-style pubs. Not a bad location for a store devoted to English literature and the bohemian life. Walk in through the bright cornflower-blue door and you find yourself in an elegant store crammed floor to ceiling with shelves bearing the finest contemporary literature from all across the English-speaking world. “Or at least our idea of great literature!” says Odile Hellier with a broad smile. Founder of the Village Voice, the petite, energetic Hellier still runs the shop after 28 years, these days aided by co-workers Mike Neal, Vincent Pierrot and Marc Fairbrother. She seems in a continuous flurry of activity—going up and down the spiral staircase, recommending a book to a customer, phoning in orders, poring over the computer in her small office at the rear of the shop.

Her voice soft but confident, she pauses often to ponder her terms, repeating them at times, to arrive at the perfect phrasing, much like a foreigner searching for the right word. But make no mistake: Hellier, French by birth but almost constantly surrounded by Americans, runs no risk of being lost in translation. After spending a year at the University of Moscow in the mid-1960s, the young student, already a fan of Faulkner and Fitzgerald, flew to the US in 1969 to polish her English. For the next 10 years she worked as a translator for an oil agency in Washington DC—a ringside seat for the social ferment in the country during that contentious, pivotal period.

“The ’70s were a time of great uprising, with all the demonstrations for civil rights and feminism and protests against the Vietnam war. It was really enthralling!” Odile recalls, suddenly nostalgic. “When I got back to France in 1980, I thought my country would have changed a lot over those 10 years, but I was wrong…. And I couldn’t find anything in the existing English-language bookshops that reflected the contemporary struggles taking place in the United States. So I decided to start my own. I wanted to offer a selection that would represent the range of intelligent criticism of American society.” Hellier chose the name Village Voice in homage to the New York newspaper she liked to read in the States. She hoped to somehow re-create in Paris the brand of brightness, energy and openness she had found in its pages.

Her timing was good. The French had just elected François Mitterrand, and Ronald Reagan was in charge at the White House. “The franc was quickly devalued and France became really inexpensive for Americans,” Hellier explains. “Can you imagine? Back then, a dollar was worth ten francs! Plus, with Reagan in power, there was a huge desire among young people to come to Europe, like they did in the days of Hemingway and Henry Miller.” Those who came found in Odile Hellier their Sylvia Beach, the legendary owner of the Paris bookstore Shakespeare & Co. on the rue de l’Odéon in the 1920s and ’30s.

Hellier’s Village Voice became a 1980s focal point for a wide community of writers, artists and intellectuals who gave readings of their work and sold their small-press magazines there. Paris was full of young expatriate writers, and their friends in the United States were invited to stop by whenever they visited. “I remember having people like Russell Banks, Jim Harrison and Raymond Carver. They weren’t so well known back then, but they were already great writers. For 10 years or so, I can say we really had a real community around the bookshop.”

Survival in the cyber era

Then came the ’90s, the Gulf war, the rise of the franc and the creeping gentrification of St. Germain des Prés. “That’s when we lost the bohème,” says Odile. “Bohemians need cheap lodging and affordable cafés. It didn’t take long for the underground to desert St. Germain des Prés. But the worst thing for us was the Internet.” Indeed, with the development of new media and powerful websites—primarily Amazon—a huge percentage of her clientele, from students to journalists, stopped buying books at her store. “Before, you needed to read for information. But now, you just look things up on the web, check data, go through small excerpts. Reading has entered a whole new era.” Hellier doesn’t hide her pessimism, or her concern for the future of independent bookshops. “Today, however hard we try to keep up the readings and activities, it’s getting more and more difficult to survive financially. You know, independent stores are closing everywhere, in the United States as well as in Paris.”

Her voice slows as she speaks of her difficulty in finding new customers or laments the loss of spontaneity in the readings she continues to hold several times a month. “They still bring a lot of people in here, and I’m pleased about that. But now I must organize them carefully in advance, or it would be impossible. It used to have more magic.” She smiles sadly, then pulls out of a drawer a small notebook in which she has written down the names of all the authors who have given readings at her shop over the years: Margaret Atwood, Richard Ford, Michael Cunningham, Colm Toibin, Cynthia Ozick…. “One day, Susan Sontag, who used to come to the bookstore quite often, came up to me and asked if she could do a reading here. Can you imagine how thrilled I was?” Her eyes glow at the recollection.

Hellier hasn’t lost faith, not yet. The atmosphere in the two-story shop is warm and welcoming, for newcomers as well as regulars, and visitors can browse for hours, steeped in the sea of books. The congenial readings are usually followed by questions, signings, a glass of wine and conversations with fellow bookworms. Recent readings have included Tom Bissell and Ben Fountain; Julia Wright discussing the last novel written by her father Richard Wright, A Father’s Law (published posthumously); Siri Hustvedt reading from her memoir The Shaking Woman; and David Sedaris with his book, Squirrel Seeks Chipmunk.  France Today‘s restaurant columnist Alexander Lobrano presented his Hungry for Paris, The Ultimate Guide to the City’s 102 Best Restaurants here.

“I still believe art and literature are the only way to transmit human thought and experience,” says Hellier. “The way writing can mold a particular reality into something universal is still alchemy for me. But it is a mystery I keep believing in. And it’s what allows me to stay put today.”

This is the closing message from the Village Voice:

On this last day of thirty years of bookselling, Odile, Michael, Vincent and Marc wish to thank every single one of you, customers, friends, authors and publishers, for making the VillageVoice Bookshop what it was during all these years: a place to discover books, new voices, hear authors, discuss literature as well as meet and make friends.

Over the past few weeks, customers and friends have been visiting us to buy books and say goodbye, to express their sadness and wish us new ventures. We have been deeply moved by so many marks of friendship, which we will remember with gratitude.

We ‘ll keep you informed of the new project which seems to be emerging  and which—while being different—will continue the convivial, friendly  spirit of the Village Voice Bookshop.

Don’t give up, continue to read….

With our warmest wishes,

Originally published in the June 2008 issue of France Today; updated in August 2012