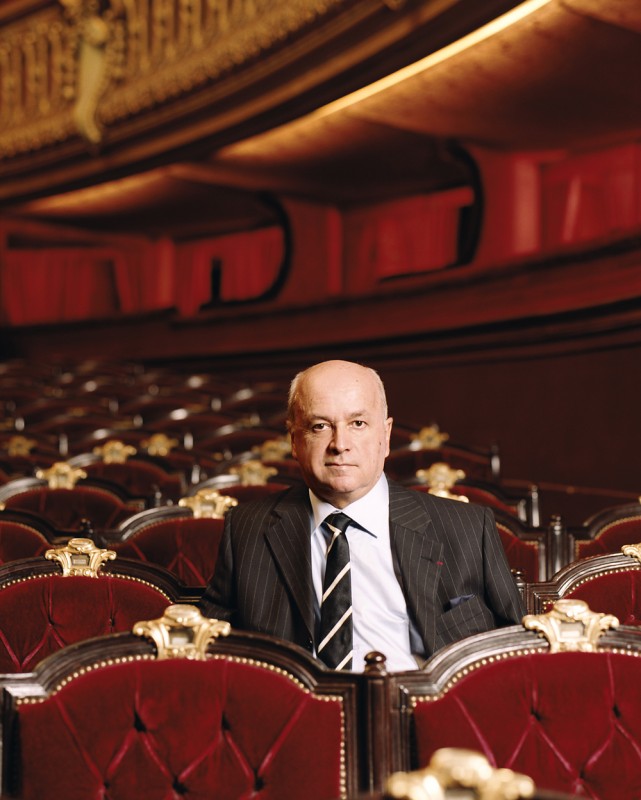 Passionate about his profession, the new head of the Paris Opera fondly recalls his years in the US, the country that launched his career.

At the helm of the Paris Opera since last August, Nicolas Joel is an accomplished artist, a polyglot, an intense worker with what some Parisians consider a tendency toward obsession: he often arrives at his Opéra Bastille office by 8 am. In late-to-bed, late-to-rise Paris, “That’s not really customary here.”

The 56-year-old Joel is a forceful man with a broad forehead, a penetrating gaze and a clear, sometimes sharp voice; his tenacity is immediately apparent — a stubborn toughness that has served him well in overcoming a recent stroke.

During his nearly 20-year tenure at the Théâtre du Capitole in Toulouse, he proved that a stage director could also succeed as the administrator of a large opera house. His new Paris domain is even larger, with a total of some 1,600 employees at the Palais Garnier and the Opéra Bastille, and a budget of €180 million.

Joel’s career owes a great deal to his education — he proudly boasts of having been immersed very early in a cultural melting pot. He was raised by his mother Anne-Marie: “She was born in Milan to a German-Swiss family, and she lived in England before moving to the US, where she worked in Hollywood, at Warner Brothers. My childhood in Paris was nourished with music and literature, both European and American.”

At 16, having passed his baccalauréat, he traveled to Salzburg, where he saw The Barber of Seville, conducted by Claudio Abbado and staged by Jean-Pierre Ponnelle. Joel was dazzled. He wrote to Ponnelle, who took him on as an assistant. “Ponnelle was much more than a director,” says Joel. “He was a musician of the stage.”

As assistant stage manager of the Opéra du Rhin in Strasbourg for several years, Joel was schooled in all aspects of stagecraft. In 1976, the controversial French director Patrice Chéreau called Joel to Bayreuth to serve as assistant on his wildly avant-garde version of Wagner’s Ring Cycle, a now legendary production that was conducted by the formidable Pierre Boulez. Chéreau, says Joel, “had an intuition, a grasp that was like lightning…. That Ring awoke a passion that has never left me. And it hasn’t been produced at the Paris Opera for over 50 years! A definitive reason for putting it on the program, starting with my first season. The entire Ring Cycle will be in repertoire within three years.” In fact, it was in directing the Ring, at the Opéra du Rhin and the Opéra de Lyon, that Joel got his start, when he was barely 26 years old.

Of all French opera directors, Joel is without a doubt the one most in touch with the American stage. In 1981 he directed Samson et Dalila at the San Francisco Opera, with Placido Domingo and Shirley Verrett. For the next ten seasons he was there every autumn. “Kurt Adler, who was the heart and soul of that opera house and a magnificent person, launched my career. And later there was Aïda at the Lyric Opera of Chicago and Andrea Chénier at New York’s Metropolitan Opera — both with Pavarotti and both wonderful memories. I made many good friends in those three cities. And I learned a certain type of efficiency and use of time.”

No one expects Joel, who is sometimes criticized for the classicism of his choices, to deal in provocative or controversial stagings — a specialty of his predecessor Gérard Mortier. “I am a pragmatist,” he says. “The most important thing is to do the best job with the largest possible repertoire, with good artists, at the right time.” Planned long in advance, opera programming is an extremely complicated business.

There will, of course, be the big names. Argentinian tenor Marcelo Alvarez wowed the crowds as Umberto Giordano’s Andrea Chénier in December, and if the Opéra has scheduled Bellini’s La Sonnambula (opening January 25 at the Bastille), it’s because to date France’s top-ranking soprano Natalie Dessay — who also accepted the “small” role of Musetta in Puccini’s La Bohème last November — has sung Sonnambula‘s magnificent role of Amina all over the world, except in Paris. This month, too, Michel Plasson will finally conduct Massenet’s Werther, in a Covent Garden production staged by French film director Benoît Jacquot.

But during his long reign in Toulouse Joel established a reputation for spotting talent on the rise, and for taking chances on the next generation of artists. Singers like Vincent Le Texier and Sophie Koch (who sings the role of Charlotte in Werther) owe him a great deal. “These thirty-year-olds,” he insists, “are tomorrow’s superstars.”

Joel’s new job puts him in charge of the Paris Opera Ballet too. The 2009-2010 dance season, which opened with Giselle and Balanchine’s Jewels, will continue with an homage to the Béjart Ballet Lausanne and Rudolf Nureyev’s version of La Bayadère, along with such contemporary offerings as Czech choreographer Ji?í Kylián’s Kaguyahime: The Moon Princess and the long-awaited Siddharta, choreographed by France’s Angelin Preljocaj to music by Bruno Mantovani. “I am happy to see the company presenting the best of the classical repertoire, as well as — thanks to ballet manager Brigitte Lefèvre — fascinating incursions into a completely different universe.”

Joel seems to have lost none of his adolescent fervor, or his desire to share his emotions. “It’s normal for music and dance to transport you, to make you cry — just as other art forms do. I myself have wept looking at paintings. And I am very sensitive to the magic of the Opéra Garnier. Who hasn’t dreamed of climbing that grand staircase, of caressing the velvet of those seats, of dining in the foyer? We can put anything on at the Garnier — and of course they did put on everything there, before the construction of the Opéra Bastille, which today is so ideal because of its technical capabilities and orchestral possibilities.”

As absorbing as his work is, Joel also reserves time for himself, and has settled into a house in the small community of Ville d’Avray on the outskirts of Paris, made famous by Corot’s paintings. “I read a lot, I listen to jazz on the radio — I love those improvisations, that freedom,” he says. “I love to cook, especially traditional dishes — I’m not opposed to sauces, quite the contrary. I go to the market regularly, at Versailles. And whenever I can, I escape to Toulouse and my favorite countryside there in the Lauragais. The view of the Pyrenees there is sublime. For me, always projecting into the future because of the Opéra, it’s a way to anchor myself in the present. Because, with my team, we’re already working on 2013, even 2016.”

Specializing in the lyric arts and choreography, the new multimedia boutique in the Palais Garnier is well-stocked not only with books, CDs and DVDs, but also with toys, copies of stage jewelry, Repetto shoes, Petunia Pickle handbags and cashmere sweaters by Eric Bompard. The library-boutique’s sleek look was created by architect and set designer Bruno Moinard, a discreet star whose lanky silhouette can be spotted on many a luxury worksite, including some 200 Cartier boutiques worldwide, the lobby of the Musée des Arts Décoratifs in Paris and the Espace Luxe of Galeries Lafayette, the famed department store that operates the Opera shop. Like the Arts Décoratifs, in a wing of the Louvre, the Palais Garnier is a historic monument, and, says Moinard, “while I was not allowed to touch the original decor, I had to bring out the essential theatricality of the space.” In the shop’s three rooms, the lighting builds to a crescendo and the bookcases and reading tables seem to float, as if supported by shadows. In the grande galerie, near the entrance, an ornate grill glitters with gold — beyond it, a new restaurant is scheduled to open in early 2011.