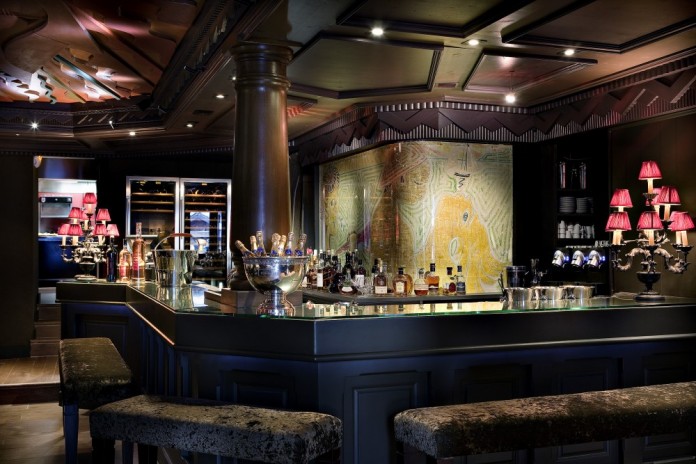 A minute or two is all it takes to fall under the spell of Megève—the icy cold air, the jingle of a horse-drawn carriage, the rush of a cascading mountain stream, the chiming of church bells. If you’re lucky it will be snowing, sparkling flakes whirling down, turning the whole village into a scene of pure enchantment.

Just after World War I, Noémie de Rothschild, the wife of Baron Maurice de Rothschild, decided that France should have a mountain resort to rival those in Switzerland, especially Saint Moritz. The decision was inspired, recounts her daughter-in-law Nadine de Rothschild in her delightful memoir Megève, Un Roman d’Amour, by a very specific event: After working for the Red Cross in Paris during the war, Noémie went to Saint Moritz to rest. One morning, in her palatial hotel, she encountered Gustav Krupp, the German steel magnate and arms manufacturer who had supplied the Kaiser’s army. “That same evening, she left the hotel,” determined to create “a Saint Moritz français“.

She took along Trygve Smith, her Norwegian ski instructor—skiing as a sport was quite new then—and François Parodi, a young French ski champion who was working at the reception desk of another Saint Moritz hotel, whom she hired to help with creating a new resort. Since Chamonix was already the province of English tourists and hard-core mountain climbers and skiers, they scoured the Haute Savoie for another location, suitable for the sportive and non-sportive alike. And they found Megève, a small Savoyard farming village in the valley of the Arve River, at about 4,000 feet, facing Mont Blanc. Among its attributes, notes Nadine de Rothschild: “its medium altitude, its gentle climate and slopes. In Megève nothing is rude, nothing is abrupt, everything evokes feminine charm.”

By 1924, the Baroness had bought an old guesthouse on a hill overlooking the village and radically transformed it into the Hôtel du Mont d’Arbois. Megève was launched as a destination for the beau monde.

Baroness Mimi, as she became known, made another fateful choice when she commissioned 28-year-old architect Henri-Jacques Le Même to design a “mountain farmhouse” for her own use. Le Même’s new three-story “chalet du skieur“, with its steeply sloping double roof, combined elements of traditional Savoyard farms with luxurious modern conveniences. (Even the use of the word chalet was an innovation at the time—it originally meant just a shepherd’s mountain hut, not a farmhouse.) Eventually Le Même built some 200 chalets in the area himself, and his rigorous design set the pattern for Megève’s future, with not a concrete apartment block in sight.

At about the same time, another young Mégevan, Armand Allard, had another bright idea. He was a tailor, first working in his uncle’s shop, and then striking out on his own, in a new shop on Megève’s main square, the Place de l’Eglise. Allard’s idea was simple and ingenious: instead of plus-fours or floppy long pants for skiing, he designed a fuseau—a pair of pants that tapered down at the ankle and hooked under the instep, easy to tuck into ski boots.

In 1937, Allais won the World Championship triple crown—downhill, slalom and the first-ever combined—wearing Allard’s fuseau, and the rest was skiing history. Allais died in October 2012 at age 100 and the Allards—Armand’s son Jean-Paul, his wife Sylvie and their sons Antoine and Alexandre—now run the family emporium on the town square, a handsome luxury shop with its own couture-quality line of ski wear and ready-to-wear, and a new accessories boutique around the corner.

World War II interrupted Megève’s expansion, but after the war it became a favored playground for Parisians in the flush of post-war partying. Stage and film stars flocked to the beautiful alpine village, and by the 1950s Megève was such a chic social scene that Jean Cocteau nicknamed it “the 21st arrondissement of Paris”.

Today it’s as glamorous as ever, with 232 square miles of ski terrain, several prestigious ski schools and a host of international events including Snow Polo and Snow Golf championships. It’s now a summer resort too, with hiking and climbing, trail biking and paragliding. And winter or summer, it’s just as attractive to the less sporting set, offering the simply sybaritic some of the most beautiful, well-equipped luxury hotels and spas anywhere in the Alps.

The favorite haunt of Cocteau and his coterie in Megève was the Mont-Blanc, grandest of the village hotels, whose wood-balconied chalet facade still faces the central Place de l’Eglise. A recent restoration has buffed up its luster: in the elegantly cozy champagne bar, Le Georges, comfortable leather chairs are grouped around antique tables and chests, knotty pine walls are bedecked with stag antlers, and champagne buckets sit atop rustic sideboards. Framed drawings by Cocteau hang on the walls, and two of the massive ceiling beams are carved with his quotes. Rooms are rustic chic, with a mix of English, Austrian and Savoyard antiques. Some walls gleam with polished old wood, others are covered in warm-hued fabrics including checks and plaids; table lamps cast their glow on inviting wing chairs and pillow-filled sofas. But bathrooms, spacious and modern even if under sloping wooden ceilings, glitter with up-to-the-minute fittings. The Pure Altitude Spa in the lower level is a setting fit for a Snow Queen: walls look carved from ice and snow, and treatment rooms simulate forest groves, with walls of bark-covered birch trunks. The spa’s skin care line, Pure Altitude, is also sold in pharmacies and department stores throughout France.

The restaurant, Les Enfants Terribles—named for a Cocteau novel and film—was restored a few years ago to its original 1950s look, with tobacco-colored walls, red lamps and stylish black-and-white chairs. A Cocteau mural brightens up the bar, and the extensive menu retains the restaurant’s signature, and excellent, steak au poivre.

The historic Mont-Blanc is now part of the hotel empire of Jocelyne and Jean-Louis Sibuet, native Savoyards who have become known for their imaginative hotel projects, starting with the renovation of another old Megève hotel, Au Coin du Feu, in 1981. In the 1990s they created Les Fermes de Marie, a new concept in luxury lodging: a hamlet composed of nine centuries-old mountain chalets that were dismantled from various alpine locations and reassembled in a 5-acre park that’s a lovely 15-minute walk from the village, following a mountain stream.

With a total of 71 rooms and suites, the interlinked chalets combine Savoyard simplicity, rustic antique decor and absolute luxury. The complex includes a bar, a lovely mountain forest-themed spa and two restaurants, one traditional French, the other offering alpine specialties including many cheese dishes. For those with boundless budgets, two private chalets are available. One, the Chalet des Fermes, is a spectacular three-story, five-bedroom lodge with cathedral ceilings, full kitchen, sauna, massage area and fitness room—all of it an alpine dream of stone walls, leather sofas, fur throws, a huge fireplace and a glass wall and wide terrace overlooking the Massif du Jaillet. (The Sibuets now also have hotels in Lyon, Ménerbes in Provence and Ramatuelle on the Côte d’Azur.)

A few kilometers from the village, perched on a plateau with a sublime view of Megève and surrounding peaks, the Domaine du Mont d’Arbois is clustered around the Chalet Noémie, the first chalet built by Le Même for the Baroness de Rothschild. Located on the Route Edmond de Rothschild, the three-chalet Domaine is still owned by the Rothschild family, and is overseen by Noémie’s grandson Benjamin and his wife Ariane.

Now divided into five suites, Chalet Noémie is a gorgeous example of traditional Mégevan architecture, with spacious beamed rooms, antique dressers and armoires, sumptuous fabrics, antler chandeliers, and white walls with delicate hand-painted frescos depicting mountain scenes. Luxurious bathrooms have walls, floors and countertops of black volcanic stone. Chalet Alice, with 6 rooms, two suites and a spacious dining room, can be rented as a private lodge. The wooden headboards on its beds are particularly charming, each one unique in its carved and painted decoration; the chalet also displays collections of local artisanal objects such as wooden nutcrackers and carved walking sticks.

Largest of the three chalets, the Chalet du Mont d’Arbois is a multi-story wooden structure whose balconied facade and high-ceilinged salon are adorned with hunting trophies. Most of the 24 rooms and suites have terraces or balconies overlooking the panoramic view, and a gorgeous indoor-outdoor pool (impressively steaming when surrounded by winter snow) is the focus of the spa and fitness area. Scattered over the widespread Domaine are six restaurants, from the gastronomique Le 1920 to the casual Atelier de la Taverne that specializes in Savoyard cuisine in a fireside setting.

Chef Emmanuel Renaut, who earned two Michelin stars for his creative cooking at the rustic village restaurant Flocons de Sel, has moved his starred establishment to a new location a few miles outside of town, adding six spacious hotel rooms with a minimalist chalet-chic decor along with an espace détente that’s not quite a full-fledged spa. The hotel and restaurant, noticeably less rustic than its predecessor with a soaring cathedral ceiling, widely spaced tables and sophisticated beige color scheme, opened in December 2009; the original restaurant, now called Flocons Village, has been transformed into a delightful bistrot whose dishes, such as eggs poached in red Mondeuse wine, and a brochette of scallops on a vibrantly green herb risotto, are delicious.

A giant Christmas tree decorated with Swarovski crystal ornaments sparkles on the Place du Village throughout the holiday season. For more information: www.megeve.com

In addition to a bevy of international brand name fashion shops:

Originally published in the January 2009 issue of France Today; updated in January 2013