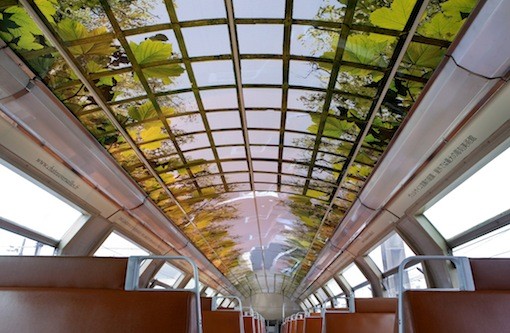 Louis XIV would surely have been just as surprised as unsuspecting passengers as they hopped aboard what looked like a standard RER C suburban train to find its interior elegantly decked out in high-tech photographic copies of the ravishing decor of the Château de Versailles and its gardens.

Inaugurated on an unannounced run on May 16, the newly redecorated six-car Versailles train is one of five château-decor trains that are scheduled to be in daily service by the end of this year, serving all 36 stations of the RER C line as it traverses Paris and four départements of the Ile-de-France region. Once all five Versailles trains are in service, the SNCF, the French National Railroad service, estimates that about 20% of the passengers taking Line C will happen to catch one.

The project is a joint effort by the SNCF, the city of Versailles and the château. And, amazingly enough, it was a mere eight or nine months from conception to the completion of the first train, just in time for the maiden run.

The new decor’s polished plastic-film panels were created using photographs of Versailles specially adapted to the dimensions of the train cars, glued to the walls and rounded ceilings of the double-decker trains. The train’s seven different decors include sections of the Chateau’s most renowned attractions—the Hall of Mirrors and the Battles Gallery—and lovely lesser-known corners: the Queen’s Chamber in the Petit Trianon, the Temple of Love and Belvedere of Marie Antoinette’s domain, the peristyle of the Grand Trianon, the library of Louis XVI and the decor of Charles X’s royal carriage.

The new train’s decor can only hint at the grandeur of the château itself, but it does offer one interesting advantage—given the difference between the train carriage and the 40-foot-high Hall of Mirrors, the Versailles train offers a much closer view of the spectacular ceiling painted by Charles Le Brun.