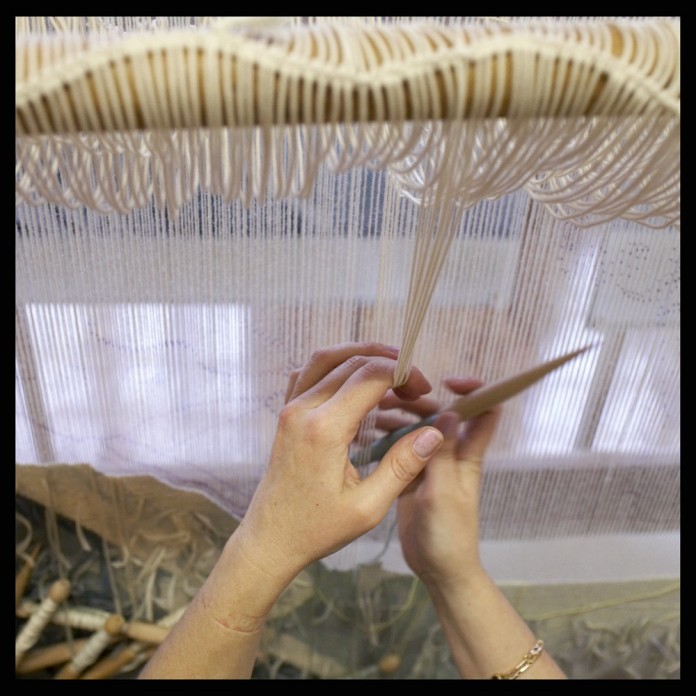 Although his name may suggest otherwise, Jehan de Gobelin was no tapestry-maker but a dyer. Because he rightly suspected that the water of the small river Bièvre would allow him to obtain a much prized scarlet dye, he moved to Paris from Bruges or Reims (no one knows which for sure). In 1443 he bought a house by the riverside, in what is now in the 13th arrondissement, where he settled with his wife and 13 children. Prosperity followed, together with the prestigious status of teinturier en écarlate—scarlet dyer—which made jealous tongues rattle that he had contracted a pact with the Devil.

The dye-works flourished nevertheless, and by the third generation Jehan’s offspring began to purchase titles of nobility. Some even held the positions of treasurer and counselor to the king. All had moved to the aristocratic Marais, leaving behind a sorely polluted Bièvre, for which they were much to blame. In 1668 the satirical poet Claude Le Petit wrote of the poor river that “the black-skinned Devil, being too hot in Purgatory, comes to bathe here in the summer. […] There is Sieur Gobelin,” he continues, “look how dirty and ugly he is!”

Antoine de Gobelin, Le Petit’s 17th-century contemporary and the last of the dynasty, is better known to history as the Marquis de Brinvilliers, the husband (and victim) of the notorious serial poisoner portrayed by Alexandre Dumas in La Marquise de Brinvilliers. Despite the pollution, the area remained pleasing enough into the 18th century, when Antoine Watteau came here to paint and Jean-Jacques Rousseau to collect herbs and meditate. But by the 19th century, the Bièvre was no better than an open sewer: “oozing dung”, according to Joris-Karl Huysmans; a “slut of a little river” as Edmond de Goncourt put it; and the setting for much of Victor Hugo’s Les Misérables. Infested with cholera, it was covered over in 1912 and has since been flowing into the Seine underground.

It was only under Henri IV, in the early 17th century, that the tapestry factory—la manufacture—was added to the dye-works at “la Maison des Gobelins“. The Gobelin family was never involved in the new venture but somehow their name has remained associated with the famous tapestry. In 1662 Finance Minister Jean-Baptiste Colbert purchased the Gobelins and its enclosed grounds, the Enclos des Gobelins, on behalf of Louis XIV, with a vast project in mind. A year earlier Colbert had engineered the downfall of the King’s treasurer, Nicolas Fouquet, whose sumptuous château Vaux-le-Vicomte (with, incidentally, its own tapestry-works next door) was perceived as lèse-majesté, outdoing the king in its regal luxury. The manufacture royale des meubles (furniture) de la Couronne […] “in the hôtel known as the Gobelins” was designed as a state monopoly, to insure that no other palaces would rival with those of the crown.

The King’s painter, Charles Le Brun, was appointed director of the reorganized Gobelins factory, where 250 tapestry-makers, painters, engravers, cabinetmakers, goldsmiths and silversmiths lived and worked “pour la gloire du roi,” to quote Colbert. A glory best expressed through the narrative art of tapestry-making, as exemplified in the series L’Histoire du Roi. Le Brun’s glory, on the other hand, came to a sad end in 1683 when Colbert’s successor, the Marquis de Louvois, brought over his own and younger protégé, Pierre Mignard.

Colbert’s vision lasted through the centuries, surviving both the French Revolution and the fire set to the workshops during the 1871 uprising of the Paris Commune. Bringing complementary crafts under the same roof and under the lavish umbrella of state patronage has enabled the Gobelins to nurture and promote exceptional talents and produce outstanding workmanship to this day. To secure the past, the Gobelins trains all its employees in the old techniques. To secure the future, it collaborates with the Atelier de Recherche et de Création (ARC) and is always open to experimenting, the goal being to break the barriers between heritage and creativity, art and craftsmanship. This was the Gobelins’ policy throughout the 20th century. It is embodied by the modernistic architecture of Jean-Camille Formigé’s Galerie des Gobelins (1914), with Paul Landowski’s bas relief, and Auguste Perret’s Mobilier National building (1937) on rue Berbier-du-Mets, which follows the winding course of the underground Bièvre. Also in the 1930s, at the instigation of Jean Lurçat, contemporary artists were invited to collaborate with the Gobelins in the design of rugs and tapestries. The list of collaborators is impressive—Picasso, Miró, Dufy, Léger, Matisse, Chagall and Sonia Delaunay, among others, and most recently architect and designer Christian de Portzamparc.

Today the Enclos des Gobelins complex houses the Mobilier National—the official repository of state furnishings—along with a renovated exhibit hall and three separate workshops: the Gobelins tapestry works and dye laboratories; the Manufacture de Beauvais, moved here after a 1941 fire destroyed the original tapestry factory in the town of the same name (a few of the looms were returned to Beauvais in 1989); and La Savonnerie, a carpet-making atelier named after the old soap factory in which Louis XIII originally founded it (which also has an annex in Lodève in southern France).

In addition, the restoration of tapestries is also carried out at Aubusson, and of lace at Le Puy and Alençon. The Gobelins workshop turns out haute lisse (high warp) tapestries woven on vertical looms; Beauvais produces thinner basse lisse (low warp) tapestries, on horizontal looms, usually for upholstery; and La Savonnerie’s carpets are made of up to 160,000 stitches per square meter, lovingly yielding just three to four gorgeous velvety pieces a year. More than 2,000 tapestries and carpets have been woven at the Paris Gobelins site and its provincial outlets since 1900.

Nonetheless, the primary mission of Les Gobelins remains the furnishing of France’s important public buildings—presidential and ministerial residences, government offices, embassies in foreign countries—a way of enhancing the prestige of France by displaying its heritage and savoir faire. Furnishings are either loaned from its storehouse (Mobilier National), or commissioned from contemporary artists.

The reopening of the renovated Galerie des Gobelins exhibit hall in 2007 was marked by a show of antique and modern works that included the Artemis tapestries woven for Queen Marie de Medici in 1607. The Galerie continues to display temporary exhibitions, drawn from both the tapestry collections and those of the Mobilier National, which are always worth seeing.

Far from the limelight, the Enclos des Gobelins is tucked away in an ordinary neighborhood, and well worth the journey. Combine your exhibition visit with a tour of the workshops and the serene surroundings, where the atmosphere of the 17th century has not entirely disappeared. Walk past the humble house where the great painter of Versailles, the famed-and-then-forgotten Le Brun, lived his final years away from the glitter of the court—he died at Les Gobelins, taken there at his request shortly before. Stroll through the charming Square René-le-Gall, once the site of the Gobelins’ kitchen gardens. Facing the square, at 41 rue de Croulebarbe, the Basque restaurant Auberge Etchegorry looks much the same as it did in the 19th century, when it was Madame Grégoire’s wine bar, as still inscribed on its facade. Unlike today, it was open on Sundays, when Chateaubriand and Victor Hugo were regulars. If you want a rare taste of a fast-disappearing slice of old Paris, wind down with a delicious and copious meal at this old-fashioned flowery chalet.

Originally published in the March 2008 issue of France Today; updated in September 2011

Thirza Vallois is the author of Around and About Paris, Romantic Paris, and Aveyron: A Bridge to French Arcadia.