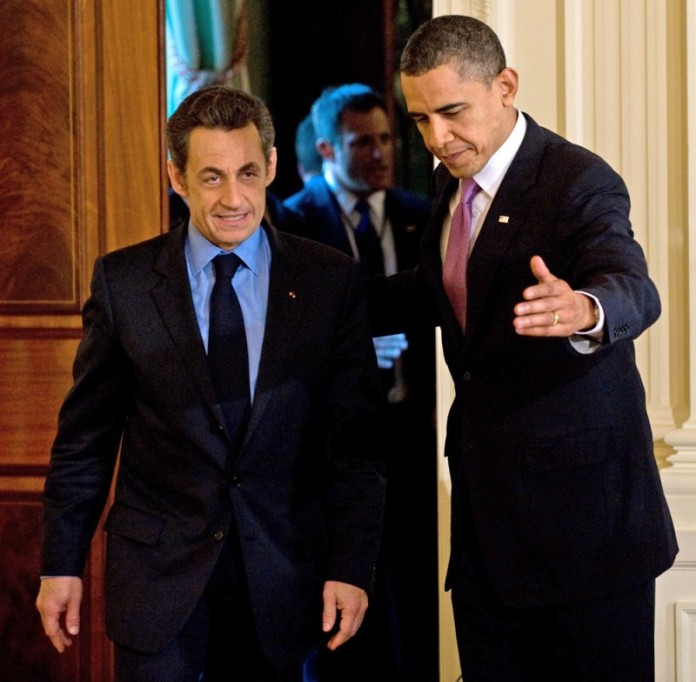 Politicians know that—they may even know that it can happen long before the end. France’s bountiful election calendar allows plenty of opportunity for voters to turn hurrahs into grumbles and raise their arms not in a victory pump but in the bras d’honneur, that familiar Latin gesture of anger and contempt.

President Nicolas Sarkozy got creamed in the March elections for France’s 26 regional councils, the little legislatures that have a lot of local authority but no national influence.

Except that all politics is local, as has been famously observed, so the national importance of the results is inescapable. The elections, three years into Nicolas Sarkozy’s presidency and two years before he has to run again, were inevitably read as a Sarko referendum. The vote spoke loudly of désamour, a falling-out-of-love story, said Le Point in words that seemed straight from the heart. Le Point has been respectful of the president, and committed to his rightist party, the Union for a Popular Majority, or UMP. And now it writes of “the tragedy” of Sarkozy.

Even at the ultra-loyalist Figaro, it took a very long reach to find a way of putting any pro-Sarkozy shine on the results. Their president was rejected, in the opinion of paired editorialists the day after the vote, because he had backed away from the promise that got him elected. Meaning “rupture,” or the deep reform of the system of generous entitlements that burdens French taxpayers and balloons public debt.

That interpretation is at wide variance from most others. Polls and analyses find mixed approval at most for Sarkozy’s goals and no enthusiasm for the meager results his reforms have produced. The Great Recession has denied or distorted whatever gains Sarkozy expected to see by now as he sliced away at the country’s huge bureaucracy and forced through policies to encourage job creation in the private sector.

Plenty of public sector jobs have disappeared under a formula that eliminates one job in two as state employees retire or leave. But the job creation isn’t happening. Unemployment has climbed as businesses downsize or fold. “Work harder to earn more,” Sarkozy’s pledge at the outset of his presidency, has turned out to be just another slogan. With the economy mired in deep recession, Sarkozy has come to look long on promises but short on keeping them.

To be fair, it takes a long time for market-friendly reforms like his to pay off, while the negative impact has come in multiples. France’s huge fonctionnariat (nearly a fifth of the work force) includes teachers and policemen. And the consequences of some of the reductions—fewer policemen, for example—are not good for a president who points to his tough law and order past in making promises about the future.

Just one more painful reform, Sarkozy has announced, and then he’s finished for the time being, no doubt meaning the rest of this term. But that last reform is a big one: pushing the retirement age back a few years later in life. That hasn’t been popular in any of the countries that have done it—most of the major economies—but in France, where leisure time is so highly valued, it’s a very hard sell.

Even without Sarkozy on the regional ballots, there was a specific, personal aspect to the drubbing. None of the eight government ministers who headed different regional slates escaped the sanction of defeat. In fact, the UMP couldn’t even get voters to the polls—the participation was just over half of eligible voters.

Martine Aubry, an uncharismatic technocrat and hard-line Socialist, claimed a stunning victory for the party she has worked to reunite in the year she has headed it as first secretary. Her chief rival, Ségolène Royal, who has seen Socialist disunity work to her advantage, demurred on giving Aubry credit. The vote was simply a rebuke for the man whose temerity beat her in 2007, she said, warming to the task of taking him on in 2012.

Whether by staying home, or turning to the left—and 54 percent did, winning control of 20 local legislatures—voters showed an emphatic disaffection for Sarkozy. His approval rating has fallen below a third, his lowest mark so far but not the lowest ever for a president in office. (That would be François Mitterrand, at 22 percent approval, near the end of his 14 years in power.) Three quarters of those responding to the pollsters said they didn’t want Sarkozy to run again.

And so, in fact, did his wife, Carla Bruni. As a wife, she said, she would prefer that he not run again, “perhaps because I would like to live the time left to us to live in some kind of peace,” she said in an interview published by the magazine Madame Figaro the weekend that voters stayed home. But she’ll be by his side if he does run, she said, dismissing as vile the rumors that the couple is having problems.

A troubling aspect of the elections was the re-emergence of the far right and racist National Front, with more than 20 percent of the votes in one region (Provence-Alpes-Côte d’Azur) and nearly that much in another (Nord). Although the FN mounted campaigns in only a dozen regions, it polled 11 percent of the votes cast, and that would be enough to re-establish it in a spoiler role in the National Assembly, if that percentage were to hold in the next parliamentary elections.

An important key to Sarkozy’s election three years ago was that he drained off enough National Front votes that the party’s viability was in serious doubt. Its founder, Jean-Marie Le Pen, remains loud and insulting as he approaches 82, but his designated successor, his daughter Marine, has failed to inspire.

Sarkozy’s fractious “debate” about national identity was designed to hold onto Le Pen voters. But he abandoned the gambit when it threatened to turn too ugly to manage. Just ugly enough, in fact, to restore the FN.

Sarkozy maintains a tight coterie of loyalists, but suffers few others. His arrogance and ego have pushed a lot of UMP stalwarts away, and now those who see Sarkozy as a liability have a new candidate. Dominique de Villepin, that unremitting Sarkozy enemy, is offering himself to rally the disaffected. Prime minister under Chirac, Villepin would mount his first political campaign if he runs for the presidency in 2012. His career of government work has always been as an appointee, but he has never actually run for public office.

Can Villepin win a popular election? Are the Socialists really reunited, their deep wounds bound and their pernicious infighting resolved? Is Sarkozy really finished?

Two years is a long time in politics. Sarkozy followed his countrywide embarrassment by heading to the US for a moment of healing with Barak Obama. He looked very presidential standing there with the other president, the one Sarkozy is jealous of, the one whose popularity has not slipped in Europe, at least not much.

In the next two years Sarkozy will host two significant international forums, the Group of 8 and the Group of 20, both summits of the world’s major economic powers. The venues are perfect for pushing his latest Big Idea, which is a kinder, gentler capitalism. The global stage has been good to Sarkozy and hauteur has been good to French presidents. Since Charles de Gaulle in the 1960s, the presidential pattern has been Olympian, almost monarchist. It’s a strategy that Sarkozy has dismissed as “roi farniente,” the do-nothing king, an insult directed specifically at Jacques Chirac. A little distance from the fray, a little more effort at looking presidential, maybe even a little “farniente” might help the hyperkinetic Sarko out of the weeds he has driven into.