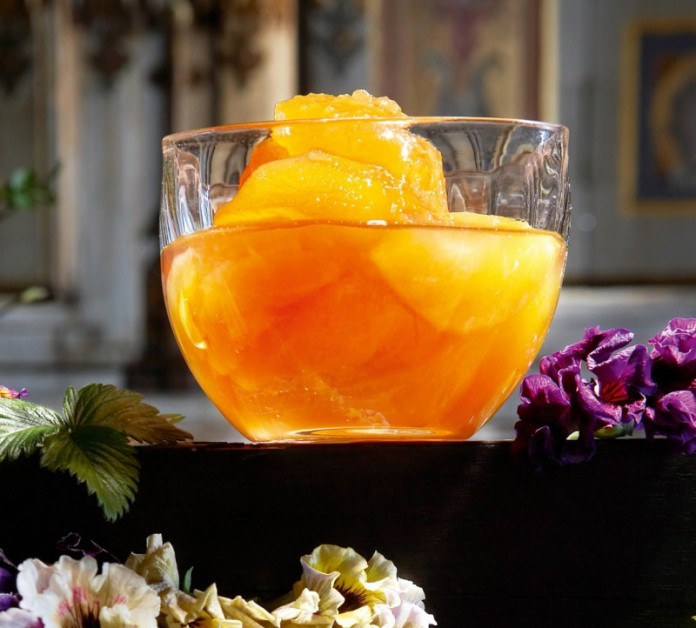 It’s been called the loveliest château in France, a perfectly proportioned masterpiece of French 17th-century architecture, decorative arts and garden design. Created by a remarkable man who surrounded himself with the greatest artists of his era, Vaux le Vicomte remains magically alive today thanks to its entrepreneurial current owner Count Patrice de Vogüé who, with his wife Cristina, has devoted his life to its restoration, maintenance and presentation to the public.

A gorgeous book by the countess invites readers inside Vaux for a very personal glimpse of the sweeter side of life in the castle. In Decadent Desserts: Recipes from Château Vaux-le-Vicomte, Cristina de Vogüé shares her favorite recipes and those of her family and friends in a stunningly designed large-format book that showcases luscious cakes, tarts and other sweets displayed not only on the château’s lustrous porcelain, antique silver and hand-woven linens but also in unexpected settings—atop a marble mantelpiece, a pile of leather-bound books or the brocade upholstery of a canapé. Not just a feast for dessert-lovers, the book offers a leisurely stroll through the château and its splendid gardens, with lingering looks at its elegant details—a music-themed wall panel from the Salle des Buffets, a glimpse of a vibrant painted ceiling through a crystal chandelier, the infinite perspective view reflected in the gilded mirrors of the dining room.

The château’s dramatic history may already be familiar to France Today readers (The Dream of Vaux, June 2008) but it’s worth retelling. Vaux was built by Nicolas Fouquet, an ambitious bureaucrat from Anjou who married money, entered Parliament at age 20 and rose rapidly under the tutelage of Cardinal Mazarin to become the young Louis XIV’s minister of finance. Celebrating his success by building a château like no other, Fouquet brought together three brilliant artists—architect Louis Le Vau, artist-decorator Charles Le Brun and landscape designer André Le Nôtre—who worked for five years directing thousands of workers to construct the castle and gardens. With an unerring eye for talent, Fouquet chose François Vatel to oversee his kitchens, and entertained La Fontaine and Molière.

When all was completed in August 1661, he invited the young king and his court to his chef-d’oeuvre for a dazzling—but ultimately disastrous—fête. Entertainment in the gardens included concerts, fountains, water jousts on the Grand Canal and a comédie-ballet by Molière and his troupe. Vatel surpassed himself on the banquet, which was served to the king’s table on solid gold plate as candlelight flickered on gilt stucco moldings, gold-threaded tapestries and jewel-toned paintings. And as guests were climbing into their carriages to return to the nearby royal residence at Fontainebleau, a spectacular fireworks display exploded in the night sky.

But the king was not amused. Louis was furious at being upstaged by one of his subjects and Jean-Baptiste Colbert, who had replaced Mazarin, convinced the jealous monarch that Fouquet was not only dipping into the till, but also plotting against the throne. Several weeks later Fouquet was arrested—and he never saw Vaux again. Charged with treason and embezzlement, he was subjected to a three-year trial and imprisoned until his death in 1680.  His tapestries, furniture and other valuables were confiscated by the king, and the talent that produced Vaux was put to work creating Versailles.

The château passed through the hands of several aristocratic families before being abandoned in the mid 19th-century. It was in a sorry state when it was bought at auction in 1875 by Alfred Sommier, Patrice de Vogüé’s great-grandfather, head of one of France’s largest sugar refineries. Sommier, and later his son Edme, spent decades—and millions—restoring the château, and Patrice continued the work when he inherited the castle in 1967, the same year he married an Italian diplomat’s daughter, Cristina Colonna di Paliano.

The young couple moved into the castle and a year later, after visiting several of England’s stately homes to see how they operated, opened Vaux to the public. Realizing that the lack of restaurants near the castle was a problem, they decided to open a simple bistrot in one of the outbuildings, and responsibility for feeding the public fell to Cristina. Her half-French, half-Russian mother had never cooked, she recounts, and she herself had been raised “with a cordon-bleu nanny and personal chefs … I grew up incapable of so much as boiling an egg.”

Undaunted, she studied cookbooks, copied recipes from her husband’s family and did all the cooking herself for the first few years. One memorable day, when five unexpected busloads of tourists arrived and she had 250 visitors to feed, she found enough main dishes in the freezer but no dessert. Improvising with stewed apples and whatever else was on hand, she created an apple tart with an unexpected topping—cornflakes—that remains a family favorite and is included in the book.

When the visitor count reached 100,000, the bistrot was abandoned in favor of a larger self-service restaurant run by professionals, and although the de Vogüés, who have three sons, have long had a family chef, Cristina still cooks for family and friends. And those early baptism-by-fire days in the restaurant kitchen planted some of the seeds for her book.

“The real story starts 25 years ago'” she recalls, serving coffee in the sunny living room of the family’s private quarters, a collection of outbuildings surrounding a glorious courtyard garden next to the château. “I thought of doing a cookbook and I started to write out a few recipes. I had some pink paper at the time and I sent four pink pages of recipes to an editor I knew, asking him what he thought. He wrote me back a letter that said ‘Go on’. That was all I needed—it gave me confidence and amour-propre and I was satisfied. I didn’t need to do any more. I put all the pages in a drawer.” There they stayed until last year, when she took them out again. Within three months she had compiled a complete collection of dessert recipes. Why just desserts?  “I like sweets and I’m good at sweets,” she says, passing a plate of featherlight hazelnut macarons to go with the espresso.

Meanwhile, her husband was working on his own book project, a history of the château from the time his great-grandfather bought it to the present day. Published in June by Actes Sud, it’s a fascinating behind-the-scenes account of the restoration of Vaux le Vicomte, and the extraordinary devotion and effort it takes to keep a private château open to the public in France today.

When she learned that an editor from the Flammarion publishing house had turned down her husband’s manuscript because the photographs were in black and white, she saw an opportunity. “I went to my office, called her and asked—would you be interested in my cookbook? She said yes immediately.” A photographer and stylist were chosen, and after repeated visits and photo sessions, the book was published in three editions—French, English and German. (The de Vogüés now enjoy a friendly rivalry in book sales.)

The recipes, culled from the family’s personal favorites and friend’s contributions—her nanny’s apple tart, Lady Cawdor’s orange soufflé, a walnut tart burnished with dark caramel—are rich and original, yet simple enough for the home chef. Much of the art lies in the decoration: one cake is studded with red currants, raspberries and brilliant green leaves; a multilayered confection is crowned on one level with blueberries, on another with macarons, and on a third with a ruched satin ribbon; a silky chocolate mousse is wreathed in flowers.

Decadent Desserts also includes family photographs and charming anecdotes of life in the castle. “Vaux le Vicomte was purchased, restored and maintained using sugar industry revenue,” says the author, “and, fittingly, it once more bathes in the aromas of cakes fresh from the oven. Vaux seems fated to lead a sweet life.”

Get the recipe for the Countess’s chocolate cake here.

Originally published in the October 2008 issue of France Today; updated in November 2011