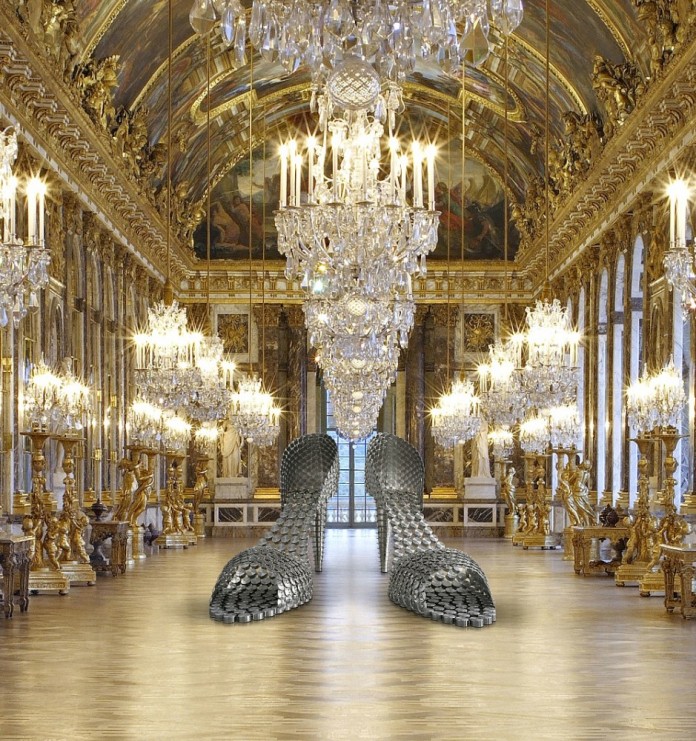 She’s a small, slim woman with golden brown hair and a discreet elegance. Usually perched on high-heeled pumps, Pégard has recently added comfortable walking shoes to her wardrobe—indispensible for trekking the four miles of sentry duty with the security guards on a nightly round, and for climbing the château’s 67 stairways.

With her natural reserve, Pégard, who was appointed president of the public enterprise of Versailles by President Nicolas Sarkozy last October, can seem a bit cold to those who don’t know her. Determined, and possessed of a rare sense of humor, the former political journalist— editor-in-chief of the weekly newsmagazine Le Point, then a consultant to Sarkozy for four and a half years—seems to have forgotten the caustic criticism that greeted the news of her appointment, often described as made “by fiat of the prince”. The principal objection—from those who opposed her, and those who supported her predecessor Jean-Jacques Aillagon—was that she is unqualified for the position, with no academic credentials, background or experience in museums or the arts.

The only daughter of a harbor pilot who guides ships in the port of Le Havre, she dreamed even as a child of becoming a journalist. She got her degree in history “to reassure my parents”, went to Paris, got her first job in the short-lived daily newspaper J’informe, moved to the Quotidien de Paris and then to Le Point. Soon she was acquainted with most of today’s politicians.

She met Nicolas Sarkozy in 1977 in Neuilly, at a meeting of young members of the RPR (Rassemblement pour la République)—they are nearly the same age. Right after his election Sarkozy offered her a job at the Elysée Palace, as a political counselor, to facilitate dialogue with the various factions inside and outside his administration. “I was a sort of free electron,” she says.

She nearly flew too close to the sun, but says she has no regrets. “To get right to the heart of power is fascinating. Everything there is more intense. Here, too, I’m at THE seat of power. I’m face to face with its enormity.”

Room with a View

She hasn’t changed the pale violet-and-anthracite decor in her predecessor’s office—she just brought in her books and added a few personal objects. Aillagon had lived in a small pavilion in the park; Pégard has chosen an apartment in the left wing of the château. Like her office, the apartment gives onto the Cour d’Honneur, the château’s monumental main entrance.

Pégard came to the job alone, and works with the same team as Aillagon. If her task seems enormous, it’s also exhilarating. Will she succeed in gaining the support of Versailles’s twenty-odd curators, in continuing to restore and refurnish the château, coming up with successful events, convincing the public to visit and revisit this unique and magnificent palace?

Versailles’s statistics are impressive: more than 2,000 acres, 2,300 rooms, 1,000 employees, 6,700,000 visitors a year, including 1,500,000 for concerts and other performances—its Opera, especially, is establishing a solid reputation in the music world. Some 10 million people visit the gardens, where admittance is usually free.

The working budget is €170 million, of which €20 million comes from donors and patrons, and it is, as it was for Louis XIV, a permanent construction site. So it comes as no surprise that, after meeting with all those who “make” Versailles—“an extraordinarily lively place, with passionate people” is the way she describes it— Pégard took up a pilgrim’s staff and set out abroad to attract even more visitors (70% are foreigners) and patrons.

“I wanted my first trip, last March, to be to the United States. There are exceptional bonds between Versailles and America,” she says, pointing out the plaque honoring John D. Rockefeller Jr. in the Galerie Basse on the way to the chapel. “Several generations of Rockefellers have saved Versailles through their generosity. And we will never be able to sufficiently thank Gérald Van der Kemp—we’re celebrating the centenary of his birth this year—and his American wife, Florence Harris,” she says, speaking of the legendary director and chief fundraisers of Versailles from 1953 to 1980. “The same goes for The American Friends of Versailles.” At a “very stimulating” lunch at the French Consulate in New York, she says, “I met people who adored Versailles for its cultural influence, its art de vivre, and younger people, who loved it for its exhibits of contemporary art.”

“I also went to China in March—I’m on the board of directors of the Maison de la France, which recently opened in Beijing. They say 100 million Chinese tourists will soon be visiting our country. Many of them will come to Versailles. What draws them is the emblematic representation of wealth, luxury and power,” she says, adding that she hopes to see a Chinese translation of La Journée de Louis XIV (Actes Sud), by art historian Béatrix Saule, a longtime Versailles curator, now director of the Versailles and Trianon museums.

While in London recently, Pégard announced the château’s upcoming Handel music festival, which will include some of the composer’s greatest interpreters—Jordi Savall, Alan Curtis, Cecilia Bartoli. Soon she is flying off to an unnamed destination in search of a philanthropist who would like to contribute to the restoration of the Bassin de Latone, the big basin and decorative fountain that is a key element of the hydraulic system developed for Louis XIV. And Brazil awaits her as well. These trips are not just about fundraising— they’re also about fruitful exchanges and partnerships.

This summer is set to be very busy: on June 4, for the first time, the château will award a Garden Book prize; June 8, the music of Handel will resound in the Royal Chapel; June 14 is inauguration day for the 11-room Galerie de l’Histoire du Château—“a formidable teaching tool that will explain the evolution of Versailles from Louis XIII’s little hunting lodge to the château we know today”.

June 19 marks the opening of the Joana Vasconcelos exhibition. The Paris-born Portuguese artist is the first woman and, at 41, the youngest of the recent string of contemporary artists—Jeff Koons, Takashi Murakami, Xavier Veilhan, Bernar Venet—to be given a solo show at Versailles. Vasconcelos’s work is rooted in “le readymade” of Marcel Duchamp—the found object considered as a work of art—and the New Realism. The Versailles show is sure to cause a stir: Perruque (Wig), to be shown in the Chambre de la Reine, is a monumental mahogany sculpture studded with locks of blonde hair. The four Walkyries are gigantic fabric constructions that will hang in the Galerie des Batailles. The project was initiated by Aillagon, and Pégard has taken it over, although not without a bit of tweaking.

Opening July 3, the new exhibit at the Grand Trianon will be a lot less controversial. Les Dames du Trianon will delight those who enjoy a behind-the-scenes view of history: portraits of women who were important at Versailles will be exhibited in the rooms where their presence can still be felt. “Visits to the Grand Trianon have increased by 11%,” says Pégard. “I’d like to have a special event there every year from now on.”

Pégard also intends to pursue the contemporary art connection. “We should increase the presence of contemporary art, in a constructive relationship with the historic heritage.” The wonderboys of French design, twin brothers Ronan and Erwan Bouroullec, will soon hang a chandelier in the Gabriel staircase, and next year the contemporary artist on show will be the Italian pope of Arte Povera, Giuseppe Penone. And also in 2013—the 400th anniversary of the birth of Louis XIV’s garden designer André Le Nôtre—contemporary landscape artist Louis Benech will pay homage to the king’s gardener by “reinterpreting” the Bosquet du Rond Vert, also known as the Bosquet du Théâtre d’Eau—the Water Theater.

Pégard has, she says, applied her very eclectic tastes to her work: “I am very curious about everything: design, theater, opera, painting.” Her passion for writing has not left her, either. Will she some day publish a memoir of her presidential-counselor days in her previous palace workplace, the Elysée? It’s a good bet: “I’m keeping all my notebooks.” For the moment, she’s planning a Versailles blog: no doubt the royal residence will be shown in a new light.