Home Learn Books Exclusive Excerpt: “(Not Quite) Mastering the Art of French Living” by Mark... 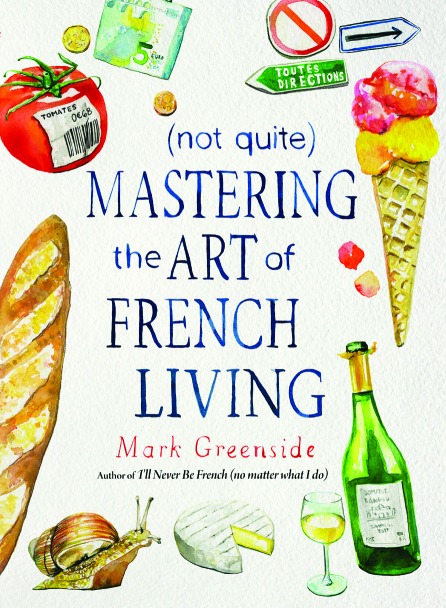 Hitting bookstores this week, Mark Greenside’s latest memoir continues the journey started in his first popular book, I’ll Never Be French. Two decades ago, Greenside bought a house in Brittany and the quirks of French living still manage to confound him. The faux-pas–filled anecdotes he shares are full of wit and whimsy, as illustrated by the following excerpt from (Not Quite) Mastering the Art of French Living.

In the U.S., it’s no big deal to experiment with food on friends. In fact, it’s an honor: LeRoy’s such a good friend, I can cook something new for him. If it doesn’t work, and worse comes to worst, we’ll go out. Not in France. In France, cooking and eating are not about taste and nutrition. They’re a combo of religion and sex. It’s tantric, merging pleasure and spirit, but only if done right—right ingredients, preparation, presentation, and flavors. The result is I approach every meal I cook for my French friends with nervousness and trepidation. More than anything, I want to do this right. I can’t speak properly, wait patiently, dress, act, or look French, but please, God, let me feed them well: bien manger. And, please, please God, let no one leave the table ill or get sick within twenty-four hours of eating at my house. That’s my prayer before I start. Then I plan and prepare like for D-Day.

It begins in the kitchen, my favorite room in the house and also the most dysfunctional. In California, my kitchen is a commuter kitchen, a single-guy kitchen, even after Donna moves in. It is not a room for eating, sitting, visiting, talking, reading, thinking, or hanging out. When people visit, we sit in the living room. In France, it’s the kitchen all the way, with its oak parquet table, soft, leather-covered chairs, whitewashed walls, beamed ceiling, 100-plus-year-old tile floor, and the summertime view through the window of red geraniums, verdant trees, and the river. It’s a room that’s ready for anything—except cooking.

First, there’s the baby fridge: five feet short, as wide as one of the doors of a double-door American fridge, with a freezer the size of a mailbox. There’s also a baby dishwasher and a baby sink. The dishwasher is a Bosch and actually holds a lot. The sink does not. One medium-size pot and it’s full. That, and its back-breaking lack of height and the ridiculously low angle of the faucet, makes it an uncomfortable place to work. According to Margaret Fox, daughter of my friends Harold and Anne Fox and former cook and owner of Café Beaujolais in Mendocino, “It’s the worst-designed kitchen in the world.”

The sink is in one corner, the fridge in another, the stove in a third, and an old English oak cupboard with my dishes, pots, and utensils in the fourth. I’m lucky the room’s not an octagon. My kitchen! This is where the damage gets done.

I take six eggs from the fridge, a pot from the cupboard, fill it with water at the sink, and cook the eggs on the stove. Monsieur and Madame P and their son and daughter-in-law, Henri and Renée, are coming to dinner tonight.

It’s unseasonably warm, so I’m going to make a huge garden salad, like I do in the U.S. I wait till after midi and drive to Loscoat to buy the veggies and bread last-minute fresh. I also buy a wedge of Tomme de Savoie and a half kilo of fleur de sel, demi-sel butter—1.1 pounds! It’s France: there can never be too much butter—as long as it’s not sweet. I buy another bottle of Muscadet-Sèvre-et-Maine-sur-Lie, because there can never be too much wine either.

I spend the afternoon washing and shredding red leaf and butter lettuce from Madame P’s garden and cutting, slicing and dicing tomatoes, mushrooms, olives, red and yellow bell peppers, cucumbers, zucchini, radishes, oranges, and cheese; I mince shallots and slice the hard-boiled eggs I made in the morning—and put everything in the fridge to chill. I set the dining room table for dinner and the table on the terrace for apéritifs—the one part of the meal I never fret about, because I do exactly what everyone does—and wait.

They arrive forty minutes late, which is on time in France. I point to the side of the house, and say, “À la terrasse,” and lead them there, because no one will go on his or her own, even though everyone has been there before. As soon as they sit, I start passing bowls of peanuts, Chee- to-like and bacon-bit thingies, sliced dry sausage, olives, and baby, thumbnail-size radishes still warm from the earth of Madame P’s garden; I take orders for drinks and mix black currant or peach liqueur for Kirs, cider for Kir Breton, water and Ricard for pastis, and serve them along with beer, white wine, and red. As long as everything flows and nothing runs out, apéritifs are a success.

After an hour of de rigueur nibbling and drinking, I excuse myself, “Je vais fait le salade,” and go into the house to mix the salad. In the U.S., someone, usually Donna or another woman—out of politeness or self-defense—always offers to help. In France, only Sharon offers—probably because she’s Canadian and has eaten a lot of my cooking. In France, the kitchen is a private space. Basically, there’s an invisible sign on the door that says, “Keep out!” I know, because every time I offer to help serve or wash dishes—as every woman I’ve ever known in the U.S. has demanded I do—I’m stopped. It was five years before I was allowed into Madame P’s kitchen, ten years before I visited the second floor of her house. I waited three years to use her bathroom, and then only because it would have been worse if I hadn’t… So I mix and dress the salad myself while everyone gets in the last of their nibbling and drinking.

I fill two large bowls and set them on the table along with three baguettes, the half kilo of butter, two bottles of water, and three bottles of red. Then I call everyone inside, “Asseyez vous, asseyez vous,” sit down, sit down.

Everyone enters, sits, and looks at me like, ‘What’s this?’ Nobody says anything, and nobody moves—not even to unfold a napkin.

That’s when I remember I’ve never actually been served a salad as dinner in any French person’s home—and I see from the confusion and disappointment on their faces that ninety degree heat and eighty-five percent humidity don’t mean a thing: it’s dinnertime, and they want and expect the full seven courses—which means I’m five courses short.

“Bon appétit,” I say, serve the salad, and hope for the best.

Out of politeness, hunger, or both, everyone digs in, except Madame P. She pokes through the salad, searching for chunks of mushroom, spears them one at a time, and places them on the side of her plate.

“C’est bon,” I say. “C’est frais,” telling her they’re either fresh or strawberries.

“Oui, oui,” she says, and then says something else, the only word of which I understand is champignons, mushrooms.

I look at Henri.

“She says they’re not cooked. Mushrooms have to be cooked. You can’t eat them raw.”

I start to explain that we eat them like this in the U.S., then remember we’re the ones who brought them McDonald’s and Cocoa Puffs, and realize it’s probably not the best argument.

I fork a large chunk of mushroom and put it in my mouth, chew it slowly, and rub my belly, moaning, “Mmmmmmm. C’est bon.”

Madame makes a face like I’m eating poo. Monsieur, making the decision to not get involved, bites through a wedge of tomato. Henri asserts his independence and wantonly eats the mushrooms in public defiance of maman. Renée doesn’t. The following day, Henri tells me no one actually liked them raw, and next time I should cook them. He also tells me cheese does not belong in a salad, and a salad is not a meal.

Excerpted with permission from (Not Quite) Mastering the Art of French Living by Mark Greenside, Skyhorse Publishing. Available May 8 at booksellers and on Amazon below. 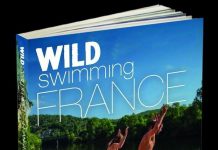