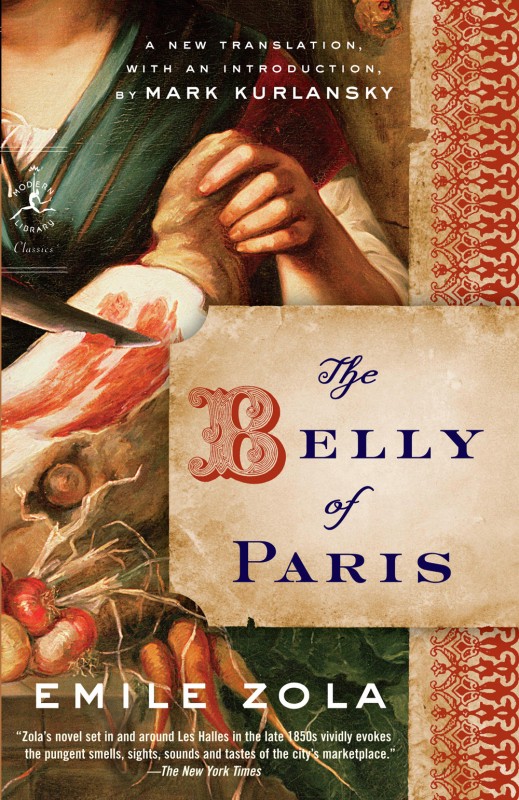 Long ago, when I worked as a lowly editorial assistant at Random House in New York, I often found myself in awe of the quiet and very smart people who kept the lights of literacy burning outside of the public eye. In those days Random House had an astonishing group of staff copy editors—about a dozen women who spoke a total of 20 languages, who would instantly know if a writer had made a dynastic mistake in a reference to Danish royalty or the optimum moment for the pollination of a specific type of Japanese apple. One of them, a lovely Scot named Jean McNutt, waved away my compliments one snowy afternoon and insisted that the real unsung heroes of publishing are translators. “It’s the hardest work I know of,” she insisted, “and yet it’s the most anonymous and the least celebrated.”

I thought of Jean often while reading well-known food writer Mark Kurlansky’s new translation of Emile Zola’s The Belly of Paris (Le Ventre de Paris), a novel set in Les Halles, the long gone but still much lamented central food market of Paris, in the 1860s, during the Second Empire. Though the novel—the third in Zola’s Rougon-Macquart family saga—has long since entered the canon of French literature in the English-speaking world, Kurlansky, who lived in Paris for many years and speaks impeccable French, decided to go back and translate it again from scratch. In so doing, Kurlansky has done Zola and the world a great service. By meticulously processing the novel through the prism of his own exquisite, crystalline prose, he makes earlier translations seem painstakingly academic.

So clearly rendered, Zola offers an absolutely fascinating portrait of the huge market in Les Halles during its heyday. Commissioned by Napoleon III, architect Victor Baltard’s great iron-and-glass pavilions—built between 1854 and 1874—housed a world that was an intensely tribal place, riddled with envy, rivalry, greed and gluttony, but also marked by bawdy good humor, regular generosity, quiet acts of kindness and a prevailing discretion that came from a beehive community in which everyone had an intense daily knowledge of everyone else’s life.

Aside from the plot—which spins on the disruption caused in the market by the return of a wrongly incarcerated political prisoner—large portions of Zola’s epic read like an ode to Gallic abundance, and also offer an intensely sensual study of Paris in its last days as an organic medieval city created by the amiable chaos and sloppiness of dense human life. Although the market was relatively new at the time Zola was writing, the side streets that surrounded it were scented with a primeval human funk, as was much of the market itself. Zola’s nearly two-page description of a cheese monger’s stall notes that: “All around her, cheeses were stinking. Brittany butter was overflowing from its basket. Normandy butters, wrapped in canvas, looked like models of stomachs onto which some sculptor had thrown wet cloths to keep them from drying out…Three Bries on round boards were as sad as waning moons…A Romantour, wrapped in silver paper, was reminiscent of a nougat bar, a sugary cheese that had strayed into the land of sour fermentation.” Wandering this grand bazaar, here you caught a warm gust of live poultry in underground cellars waiting to be slaughtered, there the slightly fetid richness of shops that sold the leftovers from aristocratic banquets.

As much as I enjoyed this novel, Zola’s characters are more caricatures than people in whom a reader becomes emotionally involved, which is why the end of the story, inevitable though it may be, comes as a shock. Suffice it to say that Zola was a fiercely political writer, and that the grand finale of The Belly of Paris is his harsh conclusion that a full belly is eternally the most cynical but surefire way of anesthetizing political activism. Roman Emperors knew that bread and circuses were essential for keeping the peace, of course, and even George W. Bush urged Americans to go shopping after 9/11, as if a good bout of conspicuous consumption would settle their nerves. But the depth of Zola’s judgment goes beyond political systems to human nature, and thus is particularly dark.

This may come as a surprise to many American readers, since the Zola novel most often taught in French literature courses is Nana, a fictional account of a Second Empire Parisian courtesan. On the other hand, Zola might not be at all surprised to discover that one of his “lighter” books was carrying his reputation in the United States, and that his renown as one of 19th-century Europe’s masters of the naturalist novel, or the novel of big ideas, has become rather vague. One way or another, Mark Kurlansky’s superb translation quite usefully puts this powerful and hauntingly topical work back on the rails of modern life.