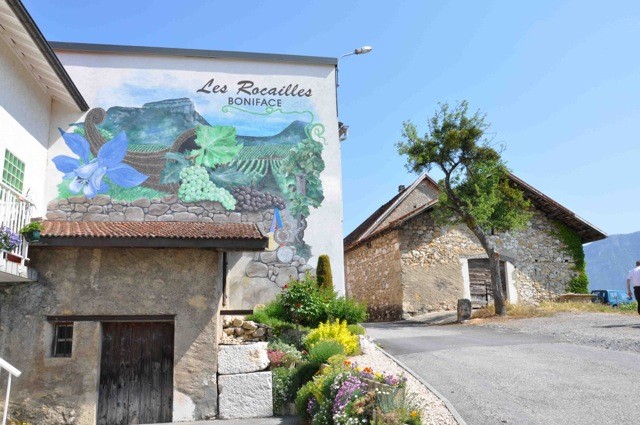 Mention Savoie wine and what most likely comes to mind is low-quality white tipple sold to ski tourists to wash down a post-piste raclette. But the page is turning on that era and now is a fine time to (re)discover the joys of some wonderful Savoyard wines from the vineyards of Les Rocailles.

Savoie wines may not have the “it” factor of, say, cool mixologist cocktails, but looking at Alban Thouroude and Guillaume Durand of Les Rocailles, you’d never know it. The two young entrepreneurs look more like they should be out sipping fine wine rather than making it. That’s part of what makes their unusual little winery stand out. The two vintners are barely 30-something, and the latest reincarnation of Les Rocailles is neither a family affair nor a working heirloom carefully passed down through generations.

College buddies, Thouroude and Durand set up their business in 2005 on a stroke of luck. “One night, we were playing cards, talking about our day, you know, like you do after work,” says Thouroude, who was interning at a property management agency at the time. “I said ‘Hey, this winemaker came into the office today, wanting to sell his vineyards.’ And that’s where we got the idea.”

That winemaker was Pierre Boniface, whose name is still found on the winery’s labels. Boniface had created his business to compete with his father’s winery, rather than inherit it. As he himself neared retirement, he wanted his own children to take over, but—fortunately for Thouroude and Durand—the children had their own careers elsewhere.

Of course, they didn’t just buy the vineyard and start making wine. It took nearly a year and a half to convince the banks to lend money to two recent graduates with diplomas in fields hardly related to winemaking. “We were turned down several times,” admits Guillaume. “We knew it was a risk, but also a golden opportunity. If the project didn’t work out, we thought, we would always find work elsewhere.”

Together with a dedicated team of three colleagues, the young entrepreneurs set out to restore the reputation of Savoie wine. “When we bought the estate, we wanted to take the time to discuss the matter with the existing staff,” says Alban. “We needed them and their skills to help ease the transition.” For two years they worked in tandem with the cellar master, a seven-year veteran at Les Rocailles. After he left, the duo continued honing their winemaking skills through experience because, Thouroude adds, “Nothing’s better than learning as you go.”

Managing their liquid assets hands-on, they make their own deliveries and work at building solid relationships with their clients—whether it’s restaurants or independent wine shops, keeping in close touch with the next link in the chain has been an important part of their business model from the start.

“We like the contact, and being able to get direct feedback from our clients,” says Thouroude. “It allows us to really take their comments into consideration and better develop our products. We aim to make good, high quality wine, so firsthand feedback is crucial.”

“Even a very good salesman can never replace the grower,” adds Durand. “Conviviality is a big part of our project— some of our clients are now our friends.”

With 17 different wines in their range, Les Rocailles offers more than enough to satisfy their customers. Thanks to the status of négociant that came with the winery when they bought it nearly seven years ago, they aren’t limited to making wine only with grapes they grow themselves. With the négociant status, they can also buy grapes from neighboring growers. As a result, even with just about 60 acres of vineyards, Les Rocailles manages to produce wines with most of the important Savoie grape varieties—Jacquère, Chardonnay, Altesse and Roussanne for the whites, and Mondeuse, Gamay and Pinot for the reds.

Les Rocailles also produces two surprising rosé wines, one still—Gamay Rosé des Rocailles Vin de Savoie Rosé AOC and one sparkling—Caprice des Rocailles. Swirling a glass of Gamay Rosé conjures aromas of rose, candied citrus and lychee followed by a round and fruity taste. The Caprice des Rocailles, in addition to the bubbles, offers whiffs of cherry and currant, with a sweet, grenadine-like flavor that pairs well with desserts.

It’s all very far from the plonk that gave Savoie wines a bad reputation in the past, but old stereotypes die hard. One persistent idée fixe is Apremont wine with raclette—a melted-cheese dish usually served with boiled or steamed potatoes. (Raclette can be made with its namesake cheese—raclette de Savoie or the Swiss raclette du Valais—or with other cheeses; traditionally, the open end of a large half-round of cheese was heated over a fire or grill, and the melted layer scraped off onto a diner’s plate, with a scraper called a raclette.) “The Apremont/raclette image is hard to shake,” laments Durand. “Sometimes it varies: there’s also Apremont/fondue.”

“We’re working to change old ideas of Savoie wines and what they can be paired with, but it’s not easy. We really have such a wide range of wines and varietals, but for many people, Savoie means white, and mostly Apremont.”

Out of the rut

Fortunately, thanks to quality wineries like Les Rocailles and their desire to restore honor to local appellations, wine lovers are beginning to rediscover the Savoie area. Thouroude and Durand travel to surrounding ski resorts to promote their wines and pry customers out of the Apremont/raclette rut.

One idea is to try something a bit different, such as a Roussette with fatty fish like salmon, or with cherry clafoutis. Its ample, well-rounded fruitiness complements the marine notes of the fish and also the egginess of the dessert. You can also try an Apremont with scallops or crawfish or even asparagus. Its taste is not so far from Chablis or Loire Valley Sauvignons, and its fresh, mineral taste works well with such dishes.

The reds, which represent some 30 percent of production, have also managed to carve out a place among the ranks of worthy Savoie wines. The 2010 Mondeuse of Les Rocailles took the bronze medal at the 2011 International Wine Challenge, and came away “Recommended” from the 2011 Decanter World Wine Awards. For an original pairing, try it with spicy or exotic dishes.

Although Les Rocailles is building an international reputation, Thouroude and Durand remain dedicated to quality wine. “We do sell to some large retailers and exporters, but our main objective is to make quality wine,” says Thouroude. “We’re not here to send our bottles all over the world if it means sacrificing quality. We’re lucky enough to be able to choose our clients—the ones who know good wine.”

Asked what they’re proudest of in their seven years of winemaking, they don’t hesitate one second. “The fact that we’re still around!” exclaims Thouroude. Of course friends and family supported them, he says, but “there were a few bets on just how long we would last”. Bets are now on many years to come.

Mondeuse Saint Jean de la Porte A well-balanced red from Mondeuse grapes. Raspberry color with spicy and smoky aromas of blueberry, cherry and pepper. Try it with stronger meats, such as pork curry, spicy chicken dishes or leg of lamb.

The wines of Savoie

The wines of the Allobroges, the Celtic tribe that occupied what is now Savoie, were known to the Romans by the 1st century BC. Today’s vineyards are mainly in three areas: south of Lake Geneva; around the shores of Lake Bourget and north to Seyssel and Frangy; and clustered southeast of Chambery. Savoie vineyards now cover some 5,500 acres, growing more than 20 grape varieties.

AOC Roussette de Savoie is white, from the Altesse grape. It may carry the geographic denominations Frangy, Marestel, Monthoux or Monterminod.

AOC Seyssel is white, either still (100% Altesse) or sparkling (Altesse and Molette)

AOC Vin de Savoie can be made from more than 10 grape varieties, and is subclassified geographically: