I’d never heard of a safari supper, so when it was suggested by one of our neighbours, I pictured a happy gathering in front of a campfire eating ostrich burgers or something gamey from the sub-continent. Turns out to be an evening where a bunch of dinner friends move from house to house in between courses – and the great advantage in our country hamlet being that we are all close enough to walk and thus avoid driving. So we thought, why not?

The evening began in style at our first watering hole where we were fortified by champagne cocktails and amuses bouches. In eager anticipation we then decamped for a short moonlight trek to another neighbour for two light entrées, oriental prawn and orange salad followed by an aromatic vegan soup, accompanied by a fresh and zesty Bordeaux Sauvignon Blanc Chateau Haut Maurin (a coincidental choice given what was coming later). My other half and I guessed this was going to be a hard act to follow, having drawn the short straw of preparing the main course. Anyhow, sometime after 10 pm we rose from our places for a brief reviving stroll through the jungle to chez nous. With no advance idea of what time we would be sitting down we had cunningly pre-prepared an enormous vat of coq au vin which was quickly bubbling away again. With the wild rice on the campfire, sorry, hotplate, there was just time to indulge in some wine tasting courtesy of our new friends at 3D wines.

3D wines have developed a rather clever concept, marrying the eternal appetite for French wine indulgence with the newer trend of experiential travel. Their members not only get access to award winning, high quality French wine but also enjoy learning about the wines and meeting the passionate wine-makers in their vineyards in France, either privately or via escorted tours. So it wasn’t hard to convince our seven other safari supper clubbers that we should jointly review the “Bordeaux experience” provided by 3D as a prelude to the (yet more) red-wine enhanced plat du jour.

The three wines had arrived in a splendid wooden box accompanied by a tasting glass, tasting note book and colourful explanatory information about the wines and their makers. So far, so impressive…but what of the wine?  We had three Bordeauxs in our sights. Chateau Mongravey, a 2010 Cru Bourgeois Margaux, from the classic commune on the left bank, Chateau Monconseil-Gazin, from Blaye on the right bank of the Gironde estuary and last but not least the St Emilion Grand Cru 2009 Chateau Cardinal Villemarine, whose grapes are picked from a tiny clos in front of the chateau.

The different cépage used in each of these three was evident. The Blaye with a lot of Merlot creating a rich and spicy wine, quite dry, the Margaux a blend of Cabernet Sauvignon and Merlot yielding a soft and supple wine, fragrant and creamy. Last but not least the St Emilion was clearly a fine example of its unique terroir (the clos ground is turned by horse-drawn plough to better aerate the soil), the Merlot and Cabernet Franc blend resulting in a full-bodied smoky wine with a very pleasing finish, yet only 12.5% alcohol. A lower alcohol level is something I have learned to appreciate even more amid the current vogue for heady, sun-baked red wines often reaching 14.5% or 15% alcohol, a level at which I feel the finesse is often lost.

I confess that by this stage of the evening as reviewers we may well have been a little short of clinical discernment , nevertheless there was genuine enthusiasm for the 3D concept and the excellent choice of three very different Bordeaux.  Our unanimous verdict: 3rd place, the Blaye, very quaffable but just a little too dry for our tastes; 2nd place the St Emilion, a beautifully crafted wine, hard not to enjoy and only beaten to 1st place by the delightful Margaux Cuvée 3D, produced by an award winning team, Régis Bernalau and son Jérome, on nine hectares in the commune of Margaux. For circa £18 ($30) a bottle you are getting a truly delightful wine. I’m going to take up the offer to visit them.

Needless to say the remains of these three bottles proved a very popular and suitable accompaniment to a classic French main course. As for the safari supper concept, well, to be honest I was a little dubious at first but I am now converted. Everyone makes a special effort yet only has to produce one course. The walking between plats seems to sharpen the appetite and refresh the mood. Not having to drive means everyone can have as many glasses as they desire. Still, a few words of warning: be organised and be prepared for a long evening. Our merriment continued until the very early hours, culminating, after a final head-clearing dose of night-time air en route to one more neighbour’s cottage, with a delightful serving of salted caramel chocolate brownie and honeycomb ice-cream accompanied by some delicious and mellow non-French (zut!) pudding wines, a kiwi Ned and South African Rustenburg.

The moon was hiding behind the clouds as the safari came to an end. We staggered back along darkening country lanes, giggling and trying not to wake the other sensible, sober neighbours in our sleepy, sleeping village.

Time with wine is an occasional column by France Today Editor-in-Chief Guy Hibbert in which he shares some random enthusiasms for affordable and interesting French wines mostly encountered whilst travelling in France, armed with a very modest amount of wine knowledge and having no ambitions or pretensions to being a wine writer. 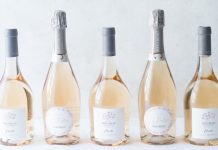