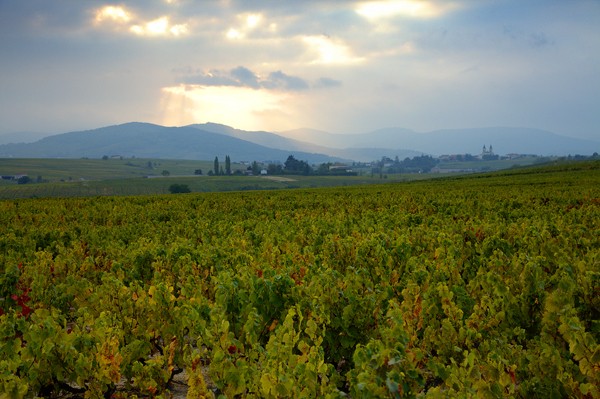 Quickly fermented and shipped around the world on the third Thursday of each November, more than one million cases of freshly pressed wine, often in colorfully labeled bottles, begin their journey via Paris for immediate shipment to a wine bar near you. Le Beaujolais Nouveau est arrivé!

Most wine lovers dismiss the hoopla as a marketing gimmick: it’s cheap wine, bottled just after fermentation, with absolutely no possibility of aging. Perfect for a headache-inducing grande quaffe, not tasting.

Still, most Francophiles harbor fond memories of the humble gamay grape, so simply expressed. I remember sitting with friends in a Parisian bistrot near Sacré Coeur enjoying Beaujolais Nouveau not too many Novembers ago. An elderly gentleman born and raised in Paris—a former music hall singer, he said—sang old songs, some terribly off-key, while everyone drank and made merry. Beaujolais Nouveau is a non-cerebral fruity wine, well suited to ring in the holiday season, and certainly a great marketing coup. Several weeks earlier, it was grapes on French vines. Now the 2010 is bottled with festive labels and released to markets all over the world on the same day as it is in France.

In antique times serva potio, or slave’s drink, was offered to the grape harvesters as soon as the grapes were pressed. It was made from a second maceration of the must (unfermented grape juice) thinned with water, which had to last until the winter solstice. For centuries residents of the French city of Lyon eagerly awaited the new wine, largely because poor storage led to the previous year’s harvest going bad. It was a local tradition, and it was not until the 1950s that the marketing phenomenon came into existence and later spread worldwide.

As much fun as Beaujolais Nouveau may be, it masks the real quality of Beaujolais. Some 50,000 acres of Beaujolais vines stretch across beautiful hilly terrain from Macon in the north to the outskirts of Lyon in the south. Although very close to the Rhône, the Beaujolais appellation is part of Burgundy, and pinot noir was once widely planted in Beaujolais. But the granite soils proved better suited to the gamay grape, which tends to grow too quickly on the richer limestone and clay soils of northern Burgundy.

Serious producers in certain Beaujolais sub-appellations craft wines that approach premier cru quality red Burgundy, but at much lower prices: a blessing for consumers, perhaps a curse for producers. Along with Beaujolais Nouveau, the region includes several sub-appellations. Beaujolais-Villages, for example, is the name given to a collection of thirty-nine villages with better vineyard sites than ordinary Beaujolais. The highest-quality level is comprised of ten “cru-status” villages, each with its own appellation—the word Beaujolais itself does not appear on their labels: Brouilly, Chénas, Chiroubles, Côte de Brouilly, Fleurie, Juliénas, Morgon, Moulin-à-Vent, Régnié, and Saint-Amour. (Like the seven dwarfs, it’s a challenge to remember them all.) These villages produce the best and most expensive—but still very affordable—Beaujolais wines, with Moulin-à-Vent, Morgon and Côte de Brouilly considered the most full-bodied and longest lasting.

Château des Jacques in Romanèche-Thorins near Moulin-à-Vent is considered a top Beaujolais estate. As elsewhere in Burgundy, producers matter as much as vintage and soil. “Wine is like music,” said director Guillaume de Castelnau. “The composition is the terroir; the instrument is the variety; the interpreter is the winemaker, so we are not limited by the gamay grape,” he explained. “If you cannot distinguish a Fleurie from a Morgon, then the instrument is not good.” He aims for complexity in his wines, not simple fruitiness.

Most Beaujolais is made with the carbonic maceration method, whereby whole bunches of freshly picked, uncrushed gamay grapes with stalks attached are dumped into large vats filled with carbon dioxide. The bottom grapes are crushed by the weight of the grapes above; fermentation begins with the emitted juice, releasing more carbon dioxide gas, which envelops the upper layers of the uncrushed grapes. At Château des Jacques, de Castelnau removes the stalks and carefully selects his grapes—once in the vineyard as they are picked, again afterward on a sorting table, a rather rare sight in Beaujolais.

Also rare in Beaujolais: pumping over. As the grapes ferment, de Castelnau pumps juice over the cap that is formed by the skins at the top to extract more color and tannin. Some wines he ages in as much as 100 percent new oak—about as far from Beaujolais Nouveau as you can get.

Just before lunch, he opened some wines from the morose 2004 vintage, to prove that even they can age well. His Moulin-à-Vent 2004 displayed lovely, slightly leather-like aromas, suave and spicy on the palate. The Moulin-à-Vent La Roche 2005—a great vintage—was perhaps the best wine I tasted on my entire trip to Beaujolais that year.

To explore Beaujolais, start from a vantage point among the best vineyards. I stayed one night at Château de Pizay, a luxurious hotel near Villié-Morgon, with perfect views of the Morgon and Côte de Brouilly slopes. It’s very expensive, but worth at least one night for its architecture, partly dating to the 11th century, and its sprawling 17th-century French garden, along with an outdoor pool among the vineyards, a relaxing spa and fine, affordable cuisine.

A light lunch on the hotel terrace was truly enjoyable, brightened by a €4 glass of the Château’s white Beaujolais 2007—white Beaujolais is generally soft and easy, made, like most white Burgundy, from the chardonnay grape. The €41 dinner menu caresses both palate and wallet, starting with an amuse bouche of coulis de tomate au pistou with a mozzarella cappuccino, then two succulent layers of foie gras followed by a main course of longe de veau—a choice filet of veal—delicious with bits of crushed hazelnut and a chocolate sauce. It was all nicely washed down with decent Morgon 2007.

Be sure to call ahead for tastings and visits with the most reputable estates which, much like Château des Jacques, make underrated wines costing between €10 and €25. Take Domaine Louis-Claude Desvignes, which produces what some say is the best Morgon in the region. Louis-Claude and his daughter Claude-Emmanuelle do not believe in new oak, saying that it dries out the wine in the long run. I sampled 12 wines from their three cuvées—La Voûte Saint Vincent, Javernières and Côte du Py—and was particularly impressed with their Javernières 1997, a 12-year-young Morgon with light notes of milk chocolate, all in finesse, along with wild strawberry and a tannic edge showing youth. Once again, missing from the label was the word Beaujolais. “Sadly, we do not put Beaujolais on our labels,” said Claude-Emmanuelle, alluding to the widespread public image of wines meant only to be glugged.

At Château Thivin in Côte de Brouilly, a 1988 vintage tasted smooth, round and delicious. Owner Claude Geoffray and his wife Evelyne—who is also mayor of the nearby town of Odenas (population 800)—take full advantage of the Côte de Brouilly’s exceptional volcanic rock known as pierre bleue, which is said to impart a mineral aspect and structure to the wines. Their domain is among the most picturesque. At Domaine du Vissoux, a Fleurie Les Garants from the fine 2000 vintage displayed distinct cherry aromas and flavors with a hint of musk indicating its age—yet another example proving that fine Beaujolais can improve with aging.

No visit to Beaujolais would be complete without stopping at Le Hameau du Vin, founded by Beaujolais ambassador Georges Duboeuf. Set in a former French railway station in Romanèche-Thorins, the Hameau explains Beaujolais in a user-friendly manner: expansive and logically linked halls display wine artifacts and detailed displays on how Beaujolais wine is made, including a wooden wine press dating from 1708, a puppet theatre explaining vintners and vines, aroma samples of “typical” Beaujolais and delightful authentic wine advertisements from the 19th century to the mid-1950s. Cap it off with a wine tasting in a turn-of-the-century style parlor or a light lunch in the picturesque Belle Epoque railway setting of the Hameau’s café restaurant, where simple terrines and cheeses perfectly match refreshing Beaujolais in its various guises. Although many Duboeuf wines do not match the quality of the individual producers discussed above—Duboeuf is generally a mass producer—more recent wines include individual estate vineyards that can be both serious and very tasty.

Another absolute must before leaving the region: take the D80 from Morgon about 22 miles towards Bourg-en-Bresse—famous for its organically raised chickens—and enjoy a pastoral landscape reminiscent of a Constable painting, leading to the village of Vonnas. Here three-star Michelin chef Georges Blanc has created his 12-acre Village Gourmand & Spa, complete with three hotels, food and wine boutiques, art exhibits and his renowned restaurant. Photos there proudly display past diners, from Charles Aznavour and Gérard Depardieu to Nicole Kidman and Richard Burton, indicating the suitable income level for diners. But no worries: I ate at the Village’s supremely charming and affordable L’Ancienne Auberge, a Belle Epoque-style restaurant with excellent service and rustic but utterly delicious fare. What better way to enjoy a firm, tender and juicy poulet de Bresse rôti, served with unctuous pomme purée and fresh salad, than with a wonderful and very reasonably priced Beaujolais cru like Morgon or Moulin-à-Vent?

Beaujolais Nouveau has long stood for conviviality. But so does handcrafted Beaujolais, a perfect accompaniment for quality but simple food from its own region. Sometimes clichés are appropriate. Food and wine do not get much better than this.

Originally published in the November 2009 issue of France Today; updated in November 2010.

Use our France In America calendar to find a Beaujolais Nouveau celebration (or any French-themed event) near you.