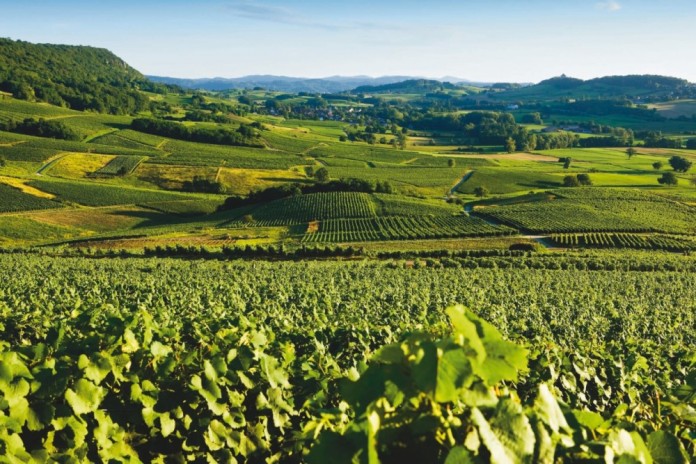 France’s Jura mountains are defined by deep, secret forests and rushing streams, so it is always a surprise to suddenly come upon snug villages edged by magnificent vineyards. Coming down into Arbois, there is such an abrupt change of scenery and state of mind that your arrival calls for a pause. A glass of Jura wine is just the thing.

If it’s summer, it might be a fruity, floral Savagnin, or a Jura red with surprising notes of blossoming rose. If snow lies over the land, try a deeply nutty 15-year-old vin jaune, or yellow wine—deep golden in color, but dry. If you’re very lucky, you might find one of the extraordinary bottles of very old vin jaune that lie hidden in some cellars—although it’s unlikely to be as prestigious as the 1774 bottle, harbored by eight generations of the Vercel family before it was auctioned in Geneva in May 2012 for nearly $50,000. It’s time to meet Jura wines, if you haven’t yet done so.

It’s highly likely that many Americans haven’t—the production is so small that even the French are often unfamiliar with them. The Jura is overshadowed in today’s wine world by the global notoriety of the wines of its big neighbors, Burgundy and Champagne. It hasn’t always been so, and happily this somewhat neglected wine region is now having the comeback it deserves, finally finding its 21st-century niche.

The region of Franche-Comté extends along France’s eastern border, sharing the Jura mountain chain with Switzerland. The southernmost of the region’s four départements is also called Jura, and it is home to all six French AOC Jura wines, whose vineyards stretch from north of Arbois to Saint-Amour (not to be confused with the Beaujolais village of the same name, which is in fact only a short distance away in Rhône-Alpes).

Four of the Jura AOCs cover geographic areas: Arbois, Château-Chalon, Côtes du Jura and L’Étoile. The two others are specialty products: Macvin, a liqueur, and sparkling Crémant du Jura, both of which are coupled with their geographic appellations.

Under French legislation, wines labeled Jura can be made from only five grape varieties: the red Pinot Noir and white Chardonnay so famously used in nearby Champagne; white Savagnin, also called Savagnin Blanc, the Jura’s signature grape (not to be confused with Sauvignon); and the red Trousseau and Poulsard.

Poulsard (sometimes called Ploussard) accounts for some 80% of the region’s red grape production. Pinot Noir is a demanding grape that, in the hands of a good grower, gives lower yields of excellent quality. Trousseau, which has beautiful red leaves in the autumn, has a deep rich color and tannic qualities much appreciated in the cellar for helping wines to age well. Jura reds are often served with grilled fish or the great variety of smoked meats for which the mountains above the vineyards are famous.

But it’s the white wines of the Jura that predominate. Chardonnay is the most widely grown variety, much of it used in sparkling wines; it accounts for at least 50% of the grapes in a Crémant du Jura, which is made by virtually every local winery, and can include any of the five authorized grape varieties.

Blends of Chardonnay and Savagnin are popular and often excellent. But be forewarned: these blends, and single-variety Savagnins, are made in many styles, from completely un-oaked to cask-aged for several months. Ask when you’re sampling, to avoid unwanted surprises.

Jura whites labeled “floral” are fruity wines generally served with richer foods, including cheese. Those labeled “traditional”—including the bulk of the Savagnin wines—are oxidized to varying degrees (evaporation is allowed in the barrels, without topping up), making some reminiscent of fino sherry, while others are fresh and vibrant. You can drink them with foods that pair well with any classic dry white wine, including fish and white meat.

Robinson is one of the three authors of Wine Grapes, a tome published in November 2012 that is already being called a classic: four years in the making and 1,200 pages long, it’s an encyclopedia of grape varieties around the world, based on new DNA studies. Co-author and Swiss scientist José Vouillamoz credits Savagnin with being the ancestor of Traminer, Gewürztraminer and other grapes. Its birthplace, he writes, was most likely right here in Franche-Comté.

Savagnin is the basis for vin jaune—renowned for the extraordinarily complex range of aromas it develops as it ages: nuts, spices, curry, cinnamon, dried fruits. Golden and dry, it is justifiably famous, but definitely not a beginner-friendly wine.

Its unusual maturing process, called sous-voile, is responsible for giving it such a deep, rich set of notes. Made with late-harvest grapes, the fermented wine must be kept a minimum of six years and three months in slightly porous oak barrels that are not topped up, as most wines are. The amount of evaporation—the “angels share”—is considerable, up to 40%, but the wine is protected from contact with the air and over-oxidization by a thin, foamy veil (the voile) of yeast that forms on the surface.

Vin jaune originated in Château-Chalon but it is made in the other three AOC areas as well, and traditionally bottled in a stocky 62-centiliter (21-oz) bottle called a clavelin. There is nothing subtle about it, and newcomers to wine generally find it hard going, but for connoisseurs it is one of the summits of the winemaker’s art.

Top Swiss winemaker Raymond Paccot recounts that when he was young his father sent him across the border to meet a vin jaune producer. He found the wine undrinkable, assumed there was some mistake and refused more. To his chagrin, he later learned that it was considered one of the world’s finest wines. “As with many well-aged special wines,” he says, “you have to learn to appreciate it.”

To savor with cheese

But young winemakers Anne and Frédéric Lambert, whose organic-oriented winery is in Pont du Bourg, near Le Chateley, contend that “vin jaune is not just for specialists, and once you become familiar with them, you begin to appreciate the beauty of the different terroirs.”

Geneva-based rare wine dealer Pierre Chevrier, who bought that 1774 bottle at Christie’s with a group of friends, said that they planned to drink it together at a dinner in a few years.

Indeed, vin jaune can accompany a meal—foods with creamy mushroom sauces are the classic pairing, with the wine served at a relatively warm 57° F or so. But a better beginner’s approach is to savor it with a variety of cheeses. Recommended by the Jura winemakers’ association: Comté, Vacherin Mont d’Or, Morbier, Bleu de Gex and other blue cheeses.

Finally, another renowned Jura specialty is vin de paille, or straw wine, so called because it is traditionally made by leaving late-harvest grapes to sweeten and gradually dry out on straw mats for three months. These sweet wines, with 10-20% residual sugar, are often served with foie gras or dessert.

In the 19th century Franche-Comté was one of France’s largest wine areas, with nearly 50,000 acres of vineyards, about the same as neighboring Burgundy.

But the region fell victim to a number of problems, starting with massive production of very mixed quality. Then phylloxera moved in waves through the vineyards from 1879 to 1895, hitting the area harder than elsewhere. Franc-Comtois botanist Pierre-Marie-Alexis Millardet was part of the team credited with saving Europe’s vineyards with their discovery that grafting stock from resistant American vines stopped the rampaging aphid-like pest. Millardet also invented the world’s first fungicide, a mixture of quicklime and copper sulfate still used in vineyards everywhere.

Another local man had already made a name for himself as a wine savior: Born in Dole and raised in Arbois, Louis Pasteur made remarkable discoveries in many scientific fields, including vaccines against rabies and anthrax, but he is best-known for the process that bears his name. In 1863 Napoleon III mandated Pasteur to study the diseases afflicting French wines, and his research established that killing microbes at a particular time and temperature would prevent spoiling, without changing the taste. Pasteurization, as he called his patented process, was initially applied to wine and beer, and only later used for milk.

Pasteur never foundered in his love for the Jura, and he returned regularly to vacation in Arbois, where he had his own vineyards. His home there, on the banks of the Cuisance River—his father was a tanner—is now a museum.

Diseases and pests took their toll on Jura vineyards, as did the two world wars, but a more important contributor to the region’s viticultural downfall was probably a new rail line that took competing wines from Languedoc-Roussillon directly to Paris. Add shifting fads and tastes plus political battles that at one point made headlines when Jura winemakers went on a tax strike, then took tax collectors hostage, in 1906.

By 1960 Jura vineyards covered only some 2,500 acres. The AOCs were established in 1936-37, a good move towards quality control, but they took another 50 years to achieve clear results. Vineyards were replanted with good AOC vines, quality controls put in place. The result: a fine selection of regional wines and specialties that are sometimes world-class.

Today Jura wines are a showcase for France’s capacity to revive a wine region that was in a long, slow decline, by focusing on quality. Young Jura winemakers, after decades in the European Union, have grown closer to their excellent wine-making neighbors in Alsace, Germany and Switzerland, finding new ways to improve quality. And as the Jura’s revival swings into full gear, there is also an increasing shift to organic and biodynamic methods.

Jacques Puffeney, known as “the pope of Arbois” for his traditional well-aged wines. His vin jaune is famous, but try his Arbois Poulsard red and the classic Cuvée Sacha 2010, a Savagnin-Chardonnay blend. 11 Quartier Saint Laurent, 03.84.66.10.89

Domaine Benoit Badoz The 100% Pinot Noir Crémant du Jura is terrific: a rosé, dry and sparkling, and at under €10 a great buy from this young winemaker whose family has been in the business for ten generations. www.badoz.fr

Domaine Berthet-Bondet Château-Chalon is the classic for vin jaune and a good one to try. The Savagnins, including the excellent Naturé, show how the same grape can give very varied wines. www.berthet-bondet.net

Domaine Jean Bourdy, one of the oldest Jura producers, has been making vin jaune continually since the 16th century. The family owns an extraordinary collection of vintage bottles, but try their simpler Savagnin. www.cavesjeanbourdy.com

François Mossu, “the great specialist”, according to one of his fellow producers, has a low public profile and small production, but his wines are beautiful. Try his Savagnin and Château-Chalon vin jaune. 3 route de Ménétru, 03.84.85.26.35

Maison Pierre Overnoy The much-admired organic wine pioneer, Overnoy is now retired but his philosophy is carried on by Emmanuel Houillon. Go for the red Arbois Pupillin Ploussard, a fine example of “natural” wine, about $35. Rue Abbé Guichard, 03.84.66.24.27

An annual wine festival held the first weekend in February, celebrating the percée, or tapping, of the first barrel of the new vintage with a carnival-style parade, costumed revelers, an auction of old vintages, a sommelier contest, wine tasting, folk dancing and fireworks. February 2–3, Voiteur (9 miles north of Lons-le-Saunier). €13 entrance and a tasting glass.

Originally published in the January 2013 issue of France Today