Home Culture Museums & Galleries Not to Miss in Normandy: Palais Bénédictine in Fécamp 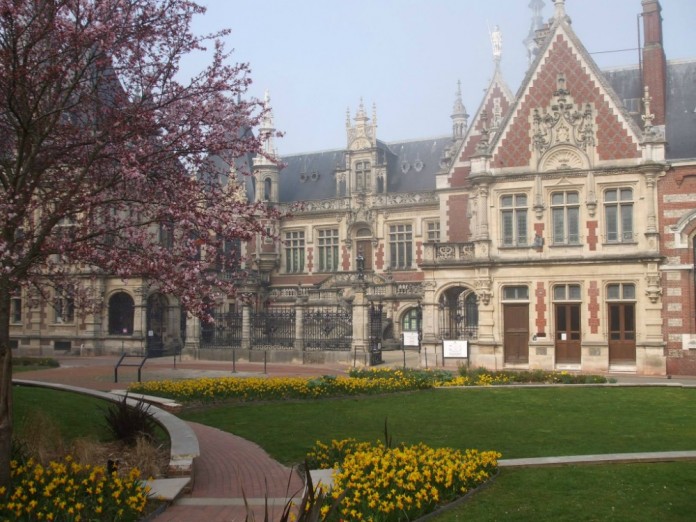 It’s a big year in Normandy, as the region commemorates the 70th anniversary of the D-Day landings. (See our comprehensive guide for events and festivities taking place in 2014.) If you’re planning a jaunt to Normandy, be sure to add the Palais Bénédictine to your itinerary. The home of the celebrated herbal liqueur is a magnificent gothic-style palace in the coastal town of Fécamp, which was once a major pilgrimage site (the Abbey housed an important Catholic relic, Christ’s blood from the Holy Land). The former fishing village is just 20 minutes’ drive from Étretat, where Impressionist painters like Claude Monet painted plein air canvases of the sublime coastal scenery.

A tour of the Palais Bénédictine is an opportunity to immerse yourself in art, while also discovering the mystical origins of the legendary libation. It was a Venetian monk, Dom Bernardo Vincelli, who first concocted the elixir in 1505. Passionate about alchemy, he experimented with healing plants like angelica and hyssop which grew on the nearby cliffs. Prized for its medicinal properties, the elixir became the drink of choice for François I.

It wasn’t until 1863 that the secret recipe was discovered by wine trader Alexandre Le Grand in an old book in the family library. He set out to recreate the drink derived of 27 different herbs and spices from around the globe. An enterprising businessman, Le Grand commercialized his product immediately, marketing Bénédictine with some of the first modern-day advertisements (Le Grand even employed famous poster art designers). He was one of the first in France to export liquor to the United States (1866), where Bénédictine soared in popularity.

Le Grand’s ambition was mirrored in the extravagant palace constructed as Bénédictine’s home. With flamboyant neo-gothic architecture in the style of Viollet-le-Duc, the palace also houses Le Grand’s collection of Medieval religious art, and a contemporary museum explaining Bénédictine’s history. The Palais doubles as the current production centre, and visitors can see the copper distillery stills and oak barrels where the liqueur is aged for eight months. To this day, only three people, including the Master Distiller, know the secret recipe for Bénédictine.

A contemporary art gallery stages impressive exhibitions by artists like Warhol and Dali. After enjoying a self-guided (or guided) tour, the jardin d’hiver is a lovely spot for a Bénédictine tasting, paired with treats (like cookies flavoured with Benedictine spices).

Today Bénédictine is back in vogue, as more and more mixologists are adding it as the special touch to hand-crafted cocktails in trendy bars. To capitalise on this trend, the Palais has introduced Cocktail Ateliers in a private salon. Whether you like your cocktails shaken or stirred, you can learn tips and tricks from the head barman of the Normandy Barrière Deauville, who leads the workshop and shares recipes for Bénédictine cocktails. (The genuine Singapore Sling recipe has always had Bénédictine, but other cocktails include the Big Ben, a simple drink made with Schweppes tonic, Benedictine, and lemon zest.) For eight people minimum, 15 people maximum. 1 hour 30 minutes, 45€ per person, including a tour of the Palais. For more information on the next workshops, contact +33 (0)2 35 10 26 10 or [email protected]