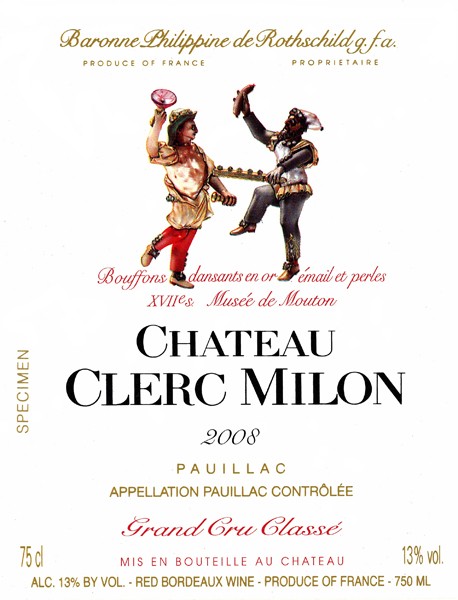 Philippe Dhalluin identifies with the 2008 hit French film comedy Bienvenue chez les Ch’tis because he comes from the same northern French region celebrated in the film. Born in Valenciennes, near Lille, the winemaking director of the illustrious Château Mouton Rothschild in Bordeaux exudes a hearty, food- and wine-loving disposition, which he says runs in his family: “People in the north of France, they know Bordeaux wines; they love wine in general.” His father worked in the aviation industry near Lille, but moved to Bordeaux because of the wine. “My father loved Bordeaux,” Dhalluin, 53, recalls. But what awakened Philippe’s interest in wine was not Bordeaux at all. “It was a Châteauneuf du Pape 1970, which friends from Provence brought to our home. It really affected me. It was delicious and explosive.”

From a Châteauneuf du Pape epiphany to responsibility for winemaking at one of only five premier crus in Bordeaux’s Médoc region, Dhalluin has come a long way. Since 2003, he has been in charge of some of the world’s best wines, all owned by Baron Philippe de Rothschild S.A.—Mouton Rothschild in Pauillac; Opus One in Napa Valley; the Chilean Almaviva; the recently renovated Domaine de Baron’arques in Limoux, near Carcassonne in Languedoc; and two other Bordeaux châteaux in Pauillac: Château Clerc Milon and Château d’Armailhac, where Philippe has his office.

Over a recent lunch at the restaurant Saint Julien, just before this year’s harvest, we enjoyed a bottle of Château Mouton Rothschild 2006, which some critics consider the best Bordeaux wine of that vintage. Dhalluin’s genuinely spontaneous love for wine and food—he insisted on cheese, after pigeon, foie gras and cabbage wrapped in a crépine of pork and topped with a roasted pigeon thigh—is somewhat at odds with the precision of his winemaking. He travels often, not only to oversee winemaking four times a year in Napa and Chile and at least once a month in Limoux, but also to host prestigious wine tastings worldwide.

Since Dhalluin’s arrival, many critics have noticed greater finesse to match the customary opulence in Mouton Rothschild. He has worked hard to improve grape selection, dividing the vineyards into parcels and even micro-parcels according to soil, microclimate and vine age. He’s also been praised for his fine-tuning in the vat rooms, where the harvest is fermented, and in the cellar, where the wine ages—he has reduced the amount of toasted oak, for example, which can give wine a slightly heavier aspect.

Dhalluin downplays his own role. “My predecessors did great work, and brought about their own innovations,” he says. “I am now here for a while, and it is a great honor to work with such exceptional terroirs.” He also notes that the company employs eight oenologists in Pauillac alone. “We work as a team to improve things at Mouton, but also at Clerc Milon and at d’Armailhac.”

At Château Clerc Milon, Dhalluin set up 40 fermentation tanks, one for each of the 40 hectares (100 acres) in production. Since 2007, he has noted “a big margin of improvement” in the winemaking, and in the vineyards under the direct management of Jean-Emmanuel Danjoy. “This château will get better and better in the coming years,” says Dhalluin.

Dhalluin’s first job after he completed his oenology studies at Bordeaux University in 1982 was hardly typical. He worked at the famous Tacama vineyard in Peru, one of the first vineyards of South America and the oldest in Peru. “After my studies, many places offered me work,” he remarks. So why Peru? “It is an extraordinary area; we had the impression of being in another world,” he said. “The French expression for anyplace exotic is C’est le Pérou,” he explains. He also liked the idea of working with soils different from those of the Old World. “I found a way to see what the soil could offer to people in terms of wine, and I am passionate about geology. Certainly there are great places in California and Australia, but Peru was less well known.”

From 1982 to 1985, he worked with Emile Peynaud, the father of modern French winemaking, who was Tacama’s consultant. “He was a living encyclopedia—I drank his words,” recalls Dhalluin. “We had a good relationship, and I benefited enormously from his instruction.” Later, after he returned to Bordeaux, Dhalluin worked at Château Beaumont in Haut Médoc, where he first met Jacques Boissenot, the famous oenologist who is a consultant to some 180 estates in Bordeaux today, including Mouton Rothschild. “Boissenot emphasized the need for balance and freshness, to exude aromatic complexity. He has been a formidable influence for me.”

In 1988, the new owner of Château Branaire Ducru, a classified growth in Saint Julien, hired him as wine-making director. “Philippe really put Branaire Ducru back on the map,” owner Patrick Maroteaux says of Dhalluin, who recalls that “We re-did everything with Patrick, from the renovation of the château to reworking the soils.” The dynamism he demonstrated must have been a determining factor in his being hired by Baronne Philippine de Rothschild, says Maroteaux. “I was sorry to lose him, but very happy for him that he was hired by Mouton Rothschild. They clearly recognized his qualities.”

Indeed, one of the biggest projects currently underway at Château Mouton Rothschild is the reconstruction of the 120-year-old cellar facilities, which will be operational in 2011, says Dhalluin. “It seemed necessary for Mouton to do that, and I’ve been lucky to have the understanding of the owners, who agree with the idea.”

Bordeaux suffered arid conditions in most of July and August, and the estate’s consultant, Jacques Boissenot, noted that the 2010 vintage will be marked by that dry spell. But the high quality of the Mouton Rothschild vineyards was apparent. “I did not see any wrinkled grapes at Mouton, even among younger vines,” he said. “Un griffage vaut deux arrosages.” (The old adage means one working over of the soil is worth two waterings—which are not allowed in any case in Bordeaux.)

My day with Dhalluin began with a tasting of the six estates he oversees, and it was wonderful to discover such balance in all six, with each expressing different regional characters. The Chilean Almaviva for example, launched in 1998, is produced by a partnership between Baron Philippe de Rothschild S.A. and the Concha y Toro vineyards in Puente Alto, near Santiago, in central Chile. The wine is made from a blend of classic Bordeaux varieties including cabernet franc, merlot, petit verdot and carménère, but cabernet sauvignon dominates. Under Dhalluin and Almaviva’s winemaker Michel Friou, the estate recently underwent a replanting program. The Almaviva 2008 was rich and big, with chocolate and blackcurrant aspects, very “New World”.

Domaine de Baron’arques 2007 conveyed savory richness as a wine from the south should. Limoux is better known for its effervescent white Blanquette de Limoux than for its reds. Until 2003 the wine known simply as Baron’arques was made mixing local grapes with grapes from other areas. But with new plantings, the Domaine de Baron’arques is a true estate wine, made with only grapes from its own 120 acres of vineyards. The blend mixes Bordeaux varietals—50% merlot, 10% each of cabernet sauvignon, cabernet franc and malbec— with syrah and grenache.

Dhalluin makes the four-hour diagonal drive southeast from Bordeaux to Limoux at least once a month to work with Baron’arques general director Vincent Montigaud. The new vines are barely 10 years old, Dhalluin explains. “To obtain greater finesse, it will need time for the vines to age.”

The Mouton Rothschild 2006, which we later enjoyed for lunch, at first showed a very nuanced and subtle nose, slightly muted, but it grew deeper and lovelier over time in the glass, as its unique, velvety texture increased. The palate was bright, but rich, exuding cassis and notes of graphite.

The two other Pauillac wines we tasted, Château d’Armailhac and Château Clerc Milon, both came from the fabled 2005 vintage, but the Armailhac proved more seductive, showing charcoal, truffle and graphite aspects. The Clerc Milon was not as expressive, but with a little time in the glass it displayed impressive density, and I think it is more profound.

Opus One 2004, from the Napa Valley joint venture between Robert Mondavi and Baron Philippe de Rothschild launched in 1978, revealed opulent, plumlike aromas, with a New World, jammy fruit aspect. Located in Oakville, the “Pauillac” of Napa, Opus One has what Dhalluin called the “power” of Mouton. One-third of vineyard’s 200 acres are now cultivated biodynamically. Michael Silacci has been winemaker at Opus One’s 140-acre estate since 2001, but since 2004, he and Dhalluin decide together on final blends for the wine, which is dominated by cabernet sauvignon. “There is a real French touch here,” said Dhalluin of the 2004, but “yes, a bit of confiture on the nose, since it was a hot year.”

Throughout the day, Dhalluin’s enthusiasm was evident. I asked him where he will be in 10 years. He is not sure, but hopes that Mouton by that time will be “absolutely, perfectly equipped” and that “Clerc Milon will be appreciated by the world.” His latest project is to set up a program of journées d’échanges, meetings among staff members from all six estates to see if, for example, “what works in Napa could work in Bordeaux and vice versa.”