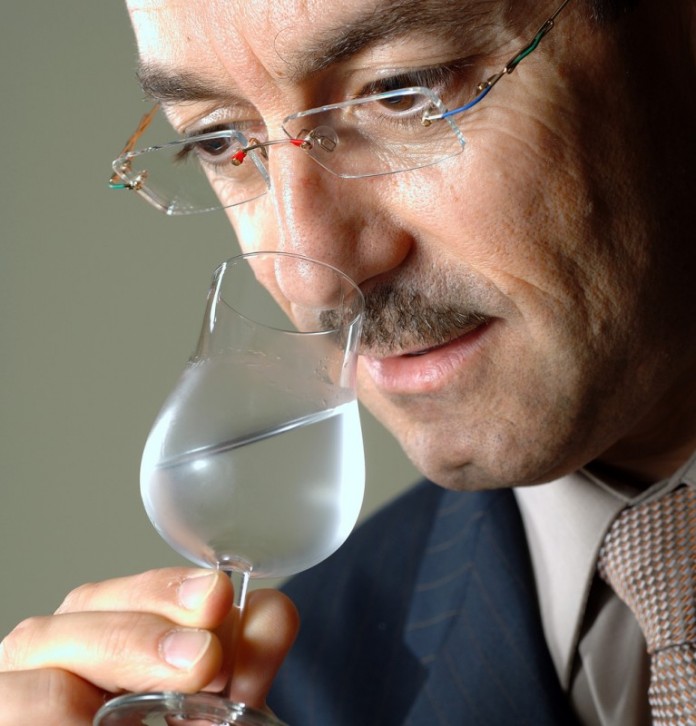 Think vodka, think Russia—or maybe Poland or even Scandinavia, home of the iconic brand Absolut. But vodka and France? The country of Cognac and Armagnac and Calvados? As the barfly said to the barman: “shurely shum mishtake”.

“Not at all,” as the barman replied. There is, indeed, a French connection with vodka and the proof incongruously lies in the very core of Cognac country, halfway between the region’s eponymous capital and Jarnac, the second town where French distillers produce the world’s best-known and biggest-selling brandy. The two ancient towns are linked by the slow-moving Charente River, whose placid waters reflect the imposing facades of the great Cognac houses like Hennessy and Courvoisier. In times gone by, the Charente served as the main shipping route for Cognac exports, and special flat-bottomed barges known as gabares plied its waters carrying their precious amber cargo downstream to the port of Rochefort on the Atlantic coast and the world beyond. These days, however, road has replaced river, and it is alongside the busy N141 that vodka’s French connection is found.

Set back from the road lies a large building painted a discreet grey. Unlike the imposing, centuries-old mansions of the big name Cognac houses, this building is low and modern, and looks rather like an aircraft hangar. But there’s more to the simple structure than meets the eye, for it is home to a marketing phenomenon. The grey hangar, as its color suggests, is the home of Grey Goose, the self-styled “Cognac of Vodka” and undoubtedly one of the major success stories of the global drinks industry.

Give the credit to the late and legendary New York spirits importer Sidney Frank, who made his first fortune back in the 1980s selling an unpronounceable and practically undrinkable German herbal concoction called Jägermeister (widely known in its native country as leberkleister, or liver glue). Until Frank came along, Jägermeister in the US was a niche product consumed largely as a digestif by the blue-collar descendants of German immigrants—a firm fan base to be sure but not one that was likely to create an import tsunami. But Frank, ever the zeitgeistmeister, learned that Jäger was fast becoming the cool new drink of the college crowd.

No one really knows why college kids took to Jäger except that the taste was a challenge and the 70-proof liqueur provided a predictable buzz. It also came with a reputation as liquid Valium and possibly even an aphrodisiac. With the aid of some shrewd advertising and a battalion of storm troopers cunningly disguised as hot young marketing mavens dubbed Jägerettes, sales of Jägermeister went into overdrive and Frank suddenly had a problem—how to follow that success story.

The answer came to him in the early hours of a Sunday morning in the summer of 1996: he would launch a super-premium vodka. This was not your regular Sunday morning epiphany and it was to prove a meister stroke. What Frank knew was that, short of a mint, vodka is the world’s nearest thing to a money machine. You can make vodka out of grain or potatoes, or indeed any organic material that will ferment to produce an alcoholic brew, which can then be concentrated through the fairly simple chemical process of distillation. If you add herbs like juniper berries and other spices—so-called botanicals—to the resulting spirit you get what the world knows as gin. If you leave it alone you can call it vodka, although these days many vodkas are given added flavorings like lemon or orange. Vodka is quick and cheap to make (after all, 60% of what goes into the vodka bottle is water—assuming the spirit is diluted to the ABV norm of 40%) yet can be sold for eye-popping amounts to the denizens of cocktail bars and other cool hangouts. This helps to explain why vodka is one of the world’s largest and fastest growing drinks categories, although the re-appearance of a serious cocktail culture in the US and elsewhere over the last decade or so hasn’t hurt.

Knowing this, what Frank chose to do was to push the limits of the money machine by creating a vodka brand that would be almost twice as expensive (and thus twice as profitable) as anything else on the market including Absolut, the Swedish premium-blend vodka that had taken the US by storm in the 1980s. This was quite a challenge since rational consumers, even the image-driven devotees of style bars, don’t usually fork out twice the odds for a product unless they can somehow be persuaded that it’s worth the money. Frank’s stroke of genius was to distill his vodka in France where, he reasoned, they have a reputation for making luxury products able to command super-premium prices. “France has the best of everything,” as he liked to say. “It’s the home of luxury. We can bottle that.”

So Frank dispatched a team to France to find a vodka-making équipe and a location for his project. Frank had good contacts in the Cognac region, where they know a thing or two about distillation, and the team soon acquired the services of industry veteran François Thibault. Next they opened a distillery under the very noses of the great Cognac producers, who no doubt envy the vodka business model: whereas vodka can be bottled and sold almost as soon as it’s made, French law requires even the least expensive category of Cognac VS (for Very Special) to be aged at least two years in expensive handmade French oak casks while VSOP (for Very Superior Old Pale) and XO (for Extra Old) quality Cognacs spend many years maturing in the barrel. This requires expensive warehousing and inescapable losses since Cognac aging in the barrel evaporates at the rate of around 2% a year—the so-called “angels’ share”.

Within a year of his Sunday morning epiphany Frank’s first batch of vodka was ready to be made, using specially sourced French winter wheat from the Beauce region near Paris and naturally filtered spring water from the Massif Central. He called it Grey Goose. These days the company has created a fanciful explanation for the distinctly un-French name (in French, grey goose would be oie cendrée, or ash-colored). It was inspired, they say, by ” the geese that have made Cognac their home and are celebrated in the region.”

These geese, the blurb continues, “are a familiar sight in the center of Cognac where a flock regularly drinks from the fountain in front of the Hôtel de Ville. Each year, geese are put in the spotlight with the Foire aux Pirons (goose fair—piron is regional dialect for goose), a local tradition that commemorates the region’s world-renowned epicurean heritage.” This is all true, but Frank’s decision to call his vodka Grey Goose almost certainly predated his decision to produce it in the Cognac region. Ever a man to sweat the assets, it is more likely that he used the name because he already enjoyed world-wide rights to it, thanks to an earlier venture involving a German wine of the same name.

No matter. As the first bottles of Grey Goose vodka were being filled in Cognac in the summer of 1997, so the marketing strategy fell into place back in the US. In a bold move Frank decided to price The Goose at around $30 a bottle—roughly twice the price of Absolut at the time—and waited confidently for the cash registers to start ringing. This they duly did, especially when, in 1998, the Chicago-based Beverage Testing Institute declared The Goose to be the “World’s Best Tasting Vodka”. Not everybody would agree with that verdict, but once again Frank had called the market correctly and a legend was born. In August 2004, with sales still skyrocketing, Frank’s audacious gamble succeeded big time when the drinks giant Bacardi agreed to pay him more than $2 billion for his upstart vodka—the highest price ever paid for a drinks brand.

Despite its acquisition by Bermuda-based Bacardi, Grey Goose continues to be made in France, even though technically it could be produced almost anywhere in the world. And it goes from strength to strength. Privately owned Bacardi does not make its sales figures public, but according to the Beverage Information Group’s latest Liquor Handbook, Grey Goose captured 6.3% of the US vodka market in 2008 (and 55% of the highly-profitable luxury vodka market according to the International Wine and Spirits Record). And with worldwide sales in excess of 32 million liters (8.5 million gallons), the French Goose is clearly flying high.

It’s also inspired a few competitors, notably Nuage, another vodka now made in the same Cognac region, and Idôl, made from Burgundy’s pinot noir and chardonnay grapes. It’s also worth noting that the world’s largest-selling premium vodka—Absolut—is also now French, in the sense that the Swedish-based brand was acquired by French beverage giant Pernod Ricard in March 2008. But that’s another story.

Profile of a Cellar Master

François Thibault was taking something of a risk in 1997 when he quit his job as maître de chai (cellar master) at a small but respectable Cognac house to help jump-start Grey Goose just down the road. The son of a winegrower, Thibault studied oenology and then the art—he would call it the alchemy—of distillation in his native Cognac region and, at a very young age, became maître de chai at Cognac producer H. Mounier.

At Mounier, among other things, Thibault found himself producing a brandy for cigar-chomping American booze importer Sidney Frank. So it was no surprise that when Frank decided to launch Grey Goose in France, Thibault was his first choice as cellar master. Although untrained in the production of vodka, Thibault’s philosophy was the right one for a spirit with sky-high aspirations. “You can only make a quality product with quality raw materials,” he says. “If you combine the best, you get the best.”

For his vodka Thibault sourced the best wheat France could produce (he was tipped off by a pastry chef in Paris about where to find it) and fine- tuned the distillation process until he got the result he wanted. “I carried a profile in my head of what I wanted Grey Goose to be,” he recalls. “The quality not only had to be irreproachable but the vodka had to have its own character.”

Grey Goose now comes in specialty flavors too—lemon, orange and pear—but it’s Thibault’s original recipe that keeps the brand at the top despite fierce competition. His recipe for success: “When you believe in what you’re doing, you have to succeed.”