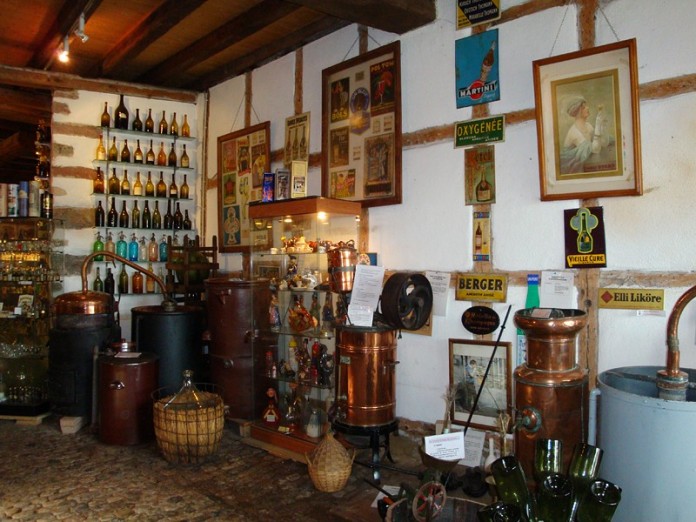 The village of Lapoutroie is nestled in the foothills of the Vosges mountains west of Colmar. The land is covered with forests, lakes and pastures, rising above the lush, vivid green vineyards of the Route des Vins to the east. This is the pays welche, which traces its origins to the Celtic tribes here before the Romans, and where the local patois, le welche, Celtic and Latinate rather than Germanic, was still spoken in the early 20th century.

Time was when every farm in the valley here had its own alambic, or still, producing eau-de-vie—water of life, the traditional clear, unsweetened fruit brandy that is synonymous with Alsace. As limpid as the mountain spring water used to dilute them, classic eaux-de-vie are distilled from pears, raspberries, cherries (kirsch) and plums, but almost anything goes when it comes to alambics—holly berries, rowan berries, ginger, pine buds, rose hips, gentian, even celery’s country cousin lovage.

Until 1952, every household in the region had the right to distill the fruits of its own production, or wild plants from the surrounding forest, tax-free up to a limit of ten liters (2.6 gallons) of pure alcohol. Then the law changed: anyone who had distilled in 1952 or earlier retained the tax-free privilege; their heirs and all newcomers could still make their eau-de-vie, but were taxed from the first drop.

There were once more than 100 stills in Lapoutroie and its environs. The tradition is dying out today, but the tiny village remains a bastion of the art: there are still some 40 private stills in operation here, along with the highly professional Distillerie G. Miclo, widely considered one of the two or three finest distilleries in Alsace, and, right on the main road, the bright yellow Musée des Eaux de Vie.

Installed in an 18th-century post house and its stables, the small private museum was created in 1986 by René de Miscault, a distiller from Fougerolles, in the Franche-Comté region, who is married to a Lapoutroie native. Miscault started his extraordinary collection with four eau-de-vie glasses bought in a bric-a-brac shop in the Vosges, and went on to fill it to the big oak-beam rafters with a delightfully eclectic array of copper stills, fruit presses, glass molds, alcohol meters, carafes, pitchers, bottle washers, corking machines, porcelain pouring spouts, glasses and literally thousands of eau-de-vie, brandy and liqueur bottles, empty and full—including vitrines crowded with miniatures, or mignonettes—from all over the world.

The oldest alambic here, from a local farm, dates to 1830; the biggest, circa 1905, holds 1500 liters (396 gallons); and another was confiscated by the police from a moonshine distiller in 1983. The French word alambic, notes Miscault, comes from the Greek ambicos, by way of the Arabic al-ambicos—just as in al-cohol and el-ixir. He points out a curious 1870 zesteuse, for paring off citrus zests, operated by foot pedals just like an old sewing machine. A long glass tube in a carrying case contained exactly one meter of eau-de-vie. Rare bottles of Chartreuse liqueur date to the early 20th-century, when church and state were officially separated in France, and the monks who made it were exiled in Tarragona, Spain.

Among the dozens of old photos and advertising posters on the wall, there’s a print of the famous Degas painting L’Absinthe (The Absinthe Drinker), and a parallel caricature replacing the Degas figures with François Mitterrand and Queen Elizabeth. The legendary absinthe has its own section, of course, along with the many anise-flavored drinks that replaced it after the real thing—known as La Fée Verte (the green fairy) because of its transparent green color—was outlawed in France in 1915. (It was also banned in the US and most of the rest of Europe, although not in Portugal or Spain, and the museum has bottles of Pernod absinthe produced—in Tarragona—after it could no longer be made in France.)

The drink notoriously used and abused by 19th-century bohemians was originally a medical potion, distilled from the herb artemisia absinthum and its variants—in English wormwood, from the German wermuth, which is also the origin of vermouth. Although it was long thought to be psychoactive and braindamaging—effects at one point blamed on the chemical thujone—it’s now considered no more dangerous than other spirits. The 19th-century problem was most likely due to the prodigious quantities consumed, and sometimes consumed undiluted.

Bitter and very high in alcohol content (around 75% volume), absinthe was usually served in an elaborate ritual: a small amount of pure absinthe was poured into a glass, and then diluted with icy water slowly dribbled over a sugar cube in a slotted spoon held over the glass, turning the clear absinthe cloudy white and bringing out the anise flavor. Absinthe is legal again now, but restricted to 45% alcohol volume, low in thujone and identified as a “boisson spiritueuse aux plantes d’absinthe”. Michault produces his own version, under the name Libertine, and visitors can taste it, along with his other eaux-de-vie and liqueurs in the museum boutique.

A short walk down Lapoutroie’s main street, you can see eau-de-vie in production at the Miclo distillery—if you arrive at the right time of year. “It all starts in June, with the cherries,” says Bertrand Lutt-Miclo, grandson of founder Gilbert Miclo. In early September, as he speaks, it’s the delectable fragrance of raspberries bubbling in the still that fills the room.

Miclo buys all its fruit—pears from the Rhône Valley, wild raspberries from Eastern Europe, mirabelles from Lorraine and others from local farmers. The quality of the fruit is essential, and it must be harvested as ripe as possible, when sugar content is highest. The fruit is crushed, skin, seeds, pits and all. Those naturally high in sugar, like pears and plums, will ferment naturally in three or four weeks. Others with less natural sugar, like raspberries and rowan berries, are macerated in neutral alcohol. The resulting purée is poured into copper stills that operate as double boilers and heated, giving off alcohol vapor and aromatics that rise through copper tubing, where it is cooled, producing clear condensation that drips down into storage vats. The clear liquid from this first distillation is about 30% alcohol.

When some 1200 liters (317 gallons) from the first distillation of fermented fruit have been collected, the second distillation begins, to produce a distillate that is about 65%–75% alcohol. (Macerated fruit is distilled only once.) The first part of the batch, called the “head” and the last part, the “tail”, are respectively too high and too low in alcohol, and are put aside, leaving the just-right heart of the matter, the coeur de chauffe, to be aged. It’s this second round that requires the distiller’s skill, to distinguish the perfect balance of alcohol content, taste and aroma.

The eau-de-vie is then aged, in stainless steel vats to preserve its clarity, or—like Vieille Prune—in wooden casks to gain an amber glow. Most age for about two years, losing some alcohol—la part des anges, the angels’ portion—as they evaporate. At Miclo, Grande Réserve eaux-de-vie are aged four to five years, as are those labeled Coeur de Chauffe—the “coeur des coeurs”, says Lutt- Miclo.

Finally, before bottling, the eaux-de-vie are diluted with pure spring water to the desired level—here it’s water filtered from the crystalline Béhine stream that courses through the village. The water turns the eau-de-vie cloudy, so it’s refrigerated, forming crystals, and then filtered before being bottled, usually in the elegant, long-necked bottles called flûtes.

Miclo’s newest product is a liqueur called Pain d’Epices—gingerbread, made with cinnamon, cloves, star anise and other spices, with the heady aroma of Christmas in Alsace.

Originally published in the October 2010 issue of France Today; updated in August 2011