How would you like to taste some of the world’s greatest wines for a mere 10 euros? If that sounds appealing, then come to the Châteauneuf-du-Pape wine fair, held this year from Friday, April 3 to Sunday, April 5. Châteauneuf-du-Pape is a charming village in northern Provence, famous both for its wines and for its aversion to flying saucers (more on this later).

Châteauneuf-du-Pape has been making great wine since the 1300s, when the papacy moved from Rome to Avignon for about a century. The pope built his summer palace in the countryside north of Avignon, founding the town and providing its name (Châteauneuf-du-Pape means “The Pope’s New Château”). Popes need good wine to drink, so vineyards were planted and the town’s reputation for fine wine began.

Most Châteauneuf-du-Pape wines are red, and like many French wines they are blends of different grapes. Here, an astonishing 13 different kinds are allowed, though most winemakers use only a few. Grenache is the most common, followed by Syrah and Mourvèdre. Many of the vineyards are covered with large, round stones that capture heat during the day, helping the grapes ripen at night.

Besides being famous for its wines, Châteauneuf-du-Pape is known for its anti-UFO law. What, you ask? Well, it seems that back in the 1950s the movie The War of the Worlds triggered a spate of UFO sightings across France. Châteauneuf-du-Pape’s mayor, spotting a chance for some free publicity, passed a law banning UFOs. “The overflight, the landing and the takeoff of aircraft known as flying saucers,” it said, “are prohibited on the territory of the community.”

Journalists from around the world descended on the town, raising its profile and drawing curious tourists. The law is still on the books and townspeople like to note (with tongue firmly in cheek) that it has been effective—no UFOs have landed since it was passed.

Ten years ago, the town decided to follow the example of other French wine-growing regions and organize a fair to promote its wines. Thus began the Salon des Vins, where nearly all of the town’s winemakers—more than 100—come to offer their wares.

The Salon is held in the town’s event center, a big room where the winemakers set up folding tables. These are covered with open bottles, and the winemakers offer tastes to anyone who passes by. They are dressed casually and are happy to chat with you. For such prestigious wines, the event is remarkably relaxed and friendly, not a wine snob in sight.

To attend the Salon, you can a buy ticket ahead of time or just show up at the door. You pay 10 euros and receive an engraved glass which entitles you to unlimited tasting. This lets you wander from winemaker to winemaker, holding out your glass for a pour, and buying bottles of anything that strikes your fancy. Doesn’t that sound like a pleasant way to spend the day?

When you get hungry, there is a large outdoor food court with specialties from all over France. Would you like some foie gras from the Gers? Truffles from Ventoux? Or maybe oysters from Brittany? They are all there, along with plenty of simpler (but still delicious) fare.

The Salon begins on Friday afternoon, April 3, and runs through the evening of Sunday the 5th. In addition to the main event, there are some special sessions that require an additional fee. This year they include a vertical tasting of older vintages and a wine-and-food-pairing luncheon.

So, whether you are a top sommelier or just someone curious about wine, you should consider a stop at the upcoming Salon des Vins on your next trip to Provence. À votre santé ! 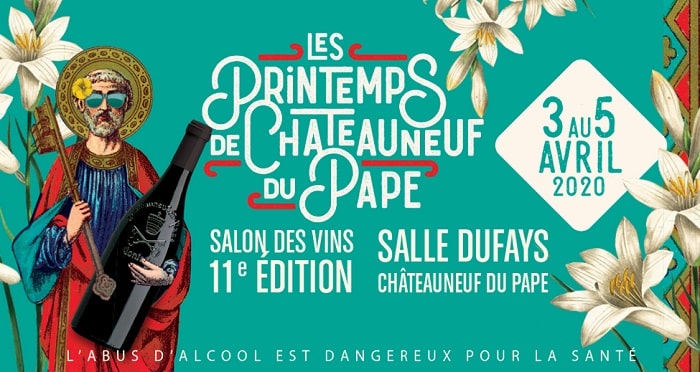