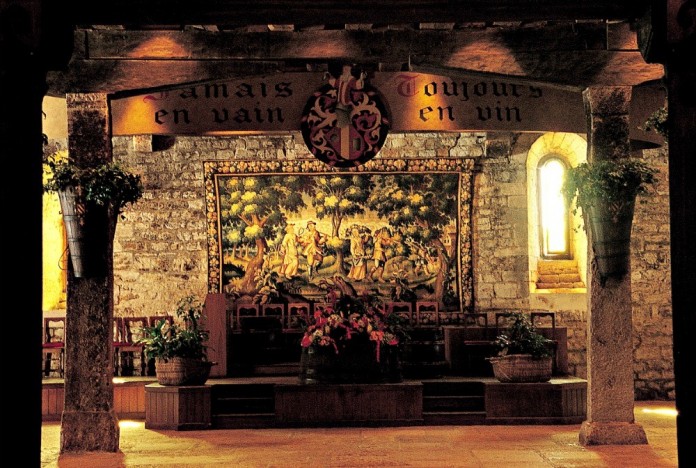 Some 100 journalists from all over the world—the US, China, Europe, Australia—arrived at the Château du Clos de Vougeot in March to taste a wide variety of 2009 grands crus Burgundies, the most recent now available on international markets.

The château is the traditional site of legendary black-tie dinners hosted by the Confrérie des Chevaliers du Tastevin (fraternity of knights of the wine-tasting cup), an exclusive club of Burgundy wine enthusiasts who lease the building. But the March gathering required no tuxedos. Instead, we “worked” through 50 wines in an intense blind tasting of 25 whites and 25 reds—all grands crus, from all over the region—in covered and numbered bottles. And then we had dinner.

It was a magical occasion, perfectly attuned to the Confrérie’s inspiring motto Jamais en vain, Toujours en vin—Never in vain, Always in wine—inscribed beneath oak beams in the 12th-century Cistercian cellier of the château, a historic landmark and an iconic symbol of Burgundy’s Côte d’Or.

The event, called Grandes Maisons Grands Crus, was organized by the Union des Maisons de Vins de Bourgogne, an association of 47 large producers known as négociants. We were given a carnet de dégustation to take notes, with a hidden key that matched the numbers to the wines.

Predictably, most reds ranged from very good to utterly delicious. Succulent is the word that came to mind for many of them, with fabulous aromatics and complexity. The whites, however, were sometimes marked by flabbiness, lacking the necessary acidity to give them verve—an unfortunate reflection of 2009’s warmer growing season. A few whites stood out surprisingly well, however, including most notably a beguiling Chevalier-Montrachet from Bouchard Père & Fils.

The dinner following the March tasting was worthy of its setting, a spacious, red-walled and high-ceilinged dining hall. Three grand cru wines accompanied an extremely good, if quite rich, meal that included a mini croque monsieur with black truffle shavings, foie gras and breast of duck.

After centuries of division by inheritance, Burgundian vineyards are often parceled into very small plots of ownership. Given the fragmented nature of the vineyards, Burgundian négociants assemble wines from various sources and then bottle and sell them to private customers, importers, restaurants and retailers. As wine writer Stephen Brook notes, the négociants act as “the region’s glue”: individual growers can make excellent wines, but because their holdings are often divided among small plots in many vineyards, they often don’t have the volume to supply clients seeking larger quantities. The top négociants, such as Bouchard Père & Fils, Louis Jadot, Maison Champy or Joseph Drouhin, often have their own vineyards, but also purchase grapes or finished wines from smaller growers as well, to sell under the négociant label.

Today, the Union des Maisons de Vins de Bourgogne is comprised of négociants that together control some 66% of the harvest, with an annual turnover of €1.2 billion, 50% of that from exports. The March gathering was the tenth edition of the Grandes Maisons Grands Crus tasting, and a fine occasion to visit the Château du Clos de Vougeot.

The château and the clos

The château stands between Vosne-Romanée and Chambolle-Musigny on the Côte de Nuits, the northern sector of the Côte d’Or. The vineyards around it were initially planted in the 12th century, by Cistercian monks from the nearby Cîteaux Abbey, who built the great cellar and the big wine presses. The grand château was added to the farm buildings in 1551 by Dom Jean Loisier, 48th abbot of Cîteaux.

It’s impossible not to admire its quiet power and charm, overlooking the gently rolling vineyards. While its size makes it seem almost like a displaced Médoc estate from Bordeaux, it is quintessentially Burgundian, with square towers still reminiscent of the Middle Ages and a clearly Renaissance entrance. Exactly when the vineyard was enclosed by walls— making it a clos—is unclear; some records indicate an enclosure as early as the 13th century.

With the French Revolution, Vougeot’s Cistercian era ended. The domain suffered through years of financial instability, passed among various French bankers, before being taken over in 1825 by Julien-Jules Ouvrard, son of Napoleon’s personal banker. In 1889 Ouvrard’s successors sold it to six Burgundian négociants, including Labouré and Champy (both still shareholders today) and Léonce Bocquet of Savigny-lès-Beaune, the largest purchaser, who acquired 37 acres of vines and the château. That sale marked the end of 700 years of single ownership. Bocquet invested heavily in the estate and restored much of the château, but in 1920 his holdings were divided among many buyers, further fragmenting the vineyards, with the château and over 7 acres going to Etienne Camuzet.

Both château and vineyards were badly damaged in WWII. Just after the liberation of France, owner Etienne Camuzet sold the château to the Société Civile des Amis du Château du Clos de Vougeot, which leased it for 99 years to the Chevaliers du Tastevin.

It’s not true, most experts now contend, that the monks of yesteryear kept the very best wines, made from vines at the top of the vineyard, for kings and popes, the fine wines of the middle part for bishops, and wines from the bottom for everyone else. Connoisseurs such as Laurent Gotti, writing in Bourgogne Aujourd’hui, believe that both exceptional and lesser qualities can be found among all of the vineyard’s sectors, instead of the more common notion that the best vineyards are those nearest to the château itself and higher up the hill.

In his excellent recent book Inside Burgundy, Jasper Morris also notes “subtle changes of terroir in various parts” of the Clos de Vougeot appellation, and that it is “somewhat simplistic” to think that quality is determined just in terms of top, middle or bottom sections. Most experts these days agree that the producer’s influence weighs just as heavily as the microclimates.

Another frequent misconception is that all Clos de Vougeot wine is massive, firm in structure and dark in color. As Morris points out, “Vougeot is sandwiched between two villages, Vosne and Chambolle, whose names epitomize finesse.” Indeed, the better Clos de Vougeots have depth and structure, but finesse and elegance, too.

One particularly successful section of Clos de Vougeot is called Le Grand Maupertui, on the northern slope facing south, near the vineyards of Grands Echezeaux; both Anne Gros and Méo-Camuzet make wines from it.

No visitor to the Clos de Vougeot would want to skip the museum, with its changing art exhibits, or the boutique. But when buying Clos de Vougeot wine there or anywhere, pay attention to both the vintage and the producer: both are important factors in top Burgundy wine. Some of the finest recent vintages for red: 1996, 1999, 2002, 2005, 2009. And 2010 looks extremely promising.

Video of the tasting and dinner, plus complete tasting notes: www.connectionstowine.com/burgundy/2009-blind-at-clos-vougeot