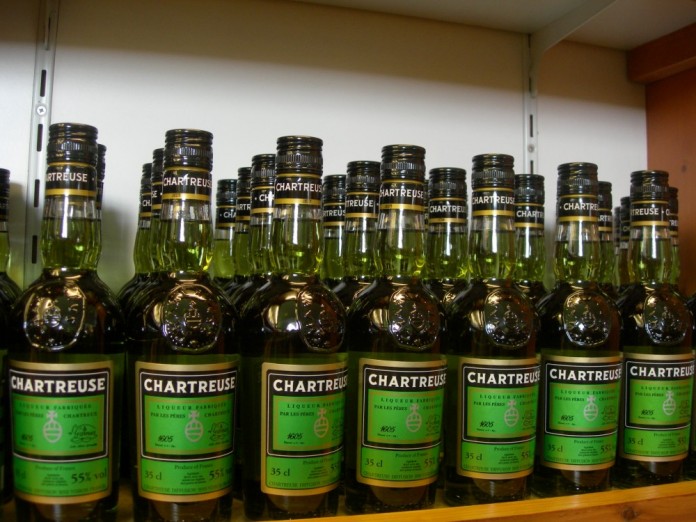 If word of mouth is the best publicity, there may be a problem when the creators of a wonderful product have taken a vow of silence. That conundrum hasn’t bothered the Carthusian monks in France’s Chartreuse mountains, though. They’ve been producing the region’s namesake alcohol since 1764, and today Chartreuse sales total around €11 million. It seems the quiet life hasn’t stopped these monks from getting the word out about one of the world’s finest liqueurs.

Film director Quentin Tarantino called it “the only liqueur so good they named a color after it,” and it’s true that the neon glow of both the green and yellow varieties grab the eye. Rest assured, the intense tint is 100% natural. The chlorophyll of more than 130 plants lends Chartreuse Verte its hallmark hue, while saffron turns Chartreuse Jaune into a canary-colored jewel of a digestif.

The liqueur may look bright, but mystery surrounds the fiery-sweet drink. Only three monks know the secrets of Chartreuse—the exact plants used, in what proportions, and how to prepare them. In fact, almost no one outside of the monastery has even seen the old manuscript containing the recipe. The drink’s history is almost as complex as its taste. “You cannot think about the liqueur without thinking about the monks,” says Michel Steinmetz, author of Chartreuse: Histoire d’une Liqueur, “The two stories are so connected.”

In 1605, François d’Estrées, a maréchal in the service of King Henri IV, possessed an ancient manuscript recipe for an elixir of long life. With its 130 ingredients and complex instructions, d’Estrées could not do anything with the manuscript other than offer it to the Vauvert monastery, a Parisian community of Chartreux, or Carthusians, monks of a contemplative order founded in the Chartreuse mountains in the 11th century. The Carthusians held a deep understanding of botany and medicinal plants. The holy apothecaries in Paris tried to interpret the recipe, and despite their wisdom, failed each time. Some of the required plants simply could not be found in 17th-century Paris. Many grew only in mountainous regions. So the monks of Vauvert locked the manuscript away, where it remained hidden for more than a century.

Today, in Voiron, a small Alpine town half an hour northwest of Grenoble, a group of enthusiastic visitors makes its way through dank cellars. The brouhaha bounces off the mold-flecked walls of what is claimed to be the world’s largest cellar. The chatter is almost deafening, although no one is speaking above normal volume. It’s here that Chartreuse is born.

“Each barrel contains green or yellow Chartreuse,” explains the young hostess, wearing an appropriately chartreuse-colored uniform. “You can tell which one by looking at the chalkboard hung on each barrel. V for Verte, J for Jaune.” Oak barrels, almost big enough to park a car in, line the double corridor of the cellars. Enough Chartreuse to fill more than a million bottles ages in this underground sanctuary. With such abundance, it is easy to take the celestial liqueur for granted, but that would be failing to give the Carthusian brothers due credit for their determination to discover its secret.

In 1736, the monks of Vauvert decided to give the mysterious manuscript to the brothers of La Grande Chartreuse, the Carthusian order’s motherhouse, tucked away in a valley of the Chartreuse mountains in eastern France. After 26 years of experiments, Brother Jérôme Maubec pierced the mystery of the manuscript. Through a complex series of eight infusions, distillations and macerations, he succeeded in creating the Elixir Végétal de la Grande Chartreuse. This olive-green elixir is still sold today, but at 142 proof, the Elixir Végétal acts more as a tonic remedy than an after-dinner drink.

After Brother Jérôme’s death, Brother Antoine continued to experiment with the recipe. Using the elixir as a base, he increased the proportion of sweet syrup to create a milder liquid at only 110 proof. In 1764 the first distillations of Chartreuse Verte, also sold as a health elixir, became an instant success in the local areas around the monastery.

But the monks didn’t stop there. In 1842, brother Bruno Jacquet invented yellow Chartreuse, sweeter yet, and milder at 86 proof. This refined libation earned the nickname “Queen of the Liqueurs” and soon accounted for 70 percent of production. Ever since, the monks have concocted new variations a few times in each century. In 1953, they began distilling Chartreuse V.E.P. (Exceptionally Long Aged), which matures for 10 years and, at close to €100 per bottle, crowns the range. In 1984, the Liqueur du 9ème Centenaire was created in honor of the 900th anniversary of the creation of the Carthusian order.

The newest member of the Chartreuse family was created in 2009. This Cuvée Meilleurs Ouvriers de France offers a powerful blend of sacred and profane savoir-faire. It is the fruit of “a collaboration rich in culture, but especially in passion,” according to Fabrice Sommier, Meilleur Ouvrier de France 2007. Nine of France’s best sommeliers worked with the reclusive monks to invent a sweet, fresh Chartreuse that reveals a range of aromas, from ginger and gentian all the way to subtle hints of mint, licorice and even fennel. A divine pleasure indeed.

The meditative life of the Carthusians couldn’t contrast more with the haunts where you’ll find their famous drink. For the past five years or so, Chartreuse has earned a new, faithful following among discerning drinkers, cocktail geeks and mixologists around the world. Sales in the New York area have grown a whopping 30 percent, a spike in demand that drove prices up by about $7 a bottle in 2010.

Chartreuse can thank bartenders for this recent renaissance. Cocktail masters from Miami to Melbourne have long known that the complex flavors and high proof of Chartreuse make it an ideal ingredient for mixed drinks. It’s extremely blendable and its high alcohol content packs a perfumed punch not present in weaker spirits.

Part of the Carthusian brothers’ mantra states “stat crux dum volvitur orbis”—the cross is steady as the earth turns. The monks’ faith has remained unshaken for nearly a millennium, but a little shaking (or stirring if you prefer) brought their Chartreuse worldwide renown—and they didn’t have to say a word.

A popular winter treat is the Green Chaud. It’s easy to make and offers rewarding warmth after a day on the ski slopes—simply add a splash of Chartreuse Verte to a cup of hot cocoa.

The Grande Chartreuse monastery is not open to the public, but visitors can still learn about the monastic order and its legendary concoction.

The Caves de la Chartreuse in Voiron offers a short but thorough exhibit on the history of the liqueur, a 3D film and visit to the world’s largest aging cellar, filled with barrels of Chartreuse, followed by a tasting. 10 blvd Edgar Kofler, 04.76.05.81.77. website

The Musée de la Grande Chartreuse, in Saint-Pierre-de-Chartreuse, is housed in the former correrie, where young monks received their training before being fully admitted to the order. The museum documents the life of the Chartreuse monks and the spread of the Carthusian order. La Correrie, Saint Pierre de Chartreuse, 04.76.88.60.45. website

From late May to early October, hike to the summit of Charmant Som to enjoy a view of the Grande Chartreuse monastery itself, where some 30 Carthusian monks live, work and pray. From Grenoble or Chambery, follow the signs for Le Col de Porte on the D512, then follow the sign for Charmant Som.

Originally published in the January 2011 issue of France Today; updated in April 2013.