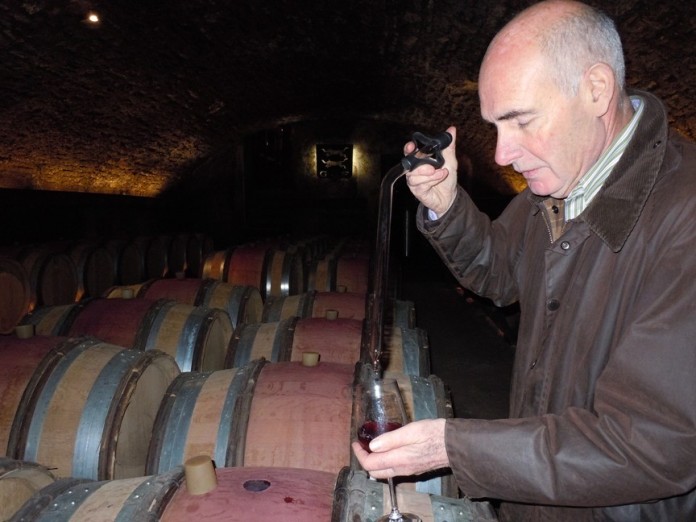 To accompany the Kobe beef, a customer at the Chanticleer Restaurant on Nantucket Island took my advice and ordered a Domaine Pierre Amiot et Fils Morey-Saint-Denis Aux Charmes Premier Cru 2003, which I had recommended as full-bodied. He knew his Burgundy, and remarked that it was also earthy, “reflecting Morey-Saint-Denis”.  A Domaine Georges Roumier Chambolle-Musigny 2003, with its elegant fruit and satiny refinement, might have paired better with beef of such quality. It would have cost much more, too. I understood his point about earthiness in Morey-Saint-Denis. Up to a point. As I have subsequently learned, working as a sommelier, simple explanations for Burgundy’s terroir go only so far.

It was near freezing in Burgundy this past December. Rain fell nonstop. Everyone was catching colds. But sampling wines from the previous harvest aging in barrels, from Gevrey-Chambertin, Morey-Saint-Denis and Chambolle-Musigny, proved heartwarming. The 2009 vintage shines bright, yielding smooth and rich wines full of character. Just as enjoyable were discussions with winemakers over the basic (and not so evident) differences among these celebrated appellations.

Of the three, all named after adjoining villages on the Côte de Nuits, Gevrey-Chambertin is the northernmost. With just under 1,500 vineyard acres, it counts nine out of the 24 Côte de Nuits grand cru vineyards. Gevrey-Chambertin wines are recognized as rich, concentrated and “masculine”, as opposed to the southernmost of the three, the more “feminine” Chambolle-Musigny.

About one-third the size of Gevrey-Chambertin, Chambolle-Musigny includes two grands crus—Musigny and Bonnes Mares—and seems to produce more delicate wines, but with just as much character. Much has been said in comparing Gevrey-Chambertin and Chambolle-Musigny. Explaining two famous grands crus from each, Nadine Gublin of Domaine Jacques Prieur said that Chambertin has a colder climate and tends to have more evident structure than Musigny. “Musigny is more forward and more elegant; it has a structure that is very silky and satiny, while Chambertin has greater finesse, but needs more time to reveal itself—it is more serious and discreet.”

Sandwiched in between, the smallest and least well known of the three is Morey-Saint-Denis because, until the 1950s, its wines were blended into the wines of the two neighboring villages and sold under their labels. Morey-Saint-Denis is sometimes described as a hybrid. “A cross between Gevrey and Chambolle, more structured but with less fragrance than the latter and less sturdy than the former,” wrote Clive Coates in his landmark book The Wines of Burgundy. But the devil is in the details, and some terroirs in Morey-Saint-Denis yield smooth and elegant wines that offer superlative price/quality ratios. Even wines from its five grand cru terroirs often pale in price when compared to their counterparts in Chambolle-Musigny and Gevrey-Chambertin.

Take the Domaine Dujac Clos Saint-Denis Grand Cru, with a sap-filled, elegant and floral expression in 2009. Or the Clos des Lambrays Grand Cru, which exhibits pristine dark fruit, cassis-like richness expressed as spicy perfume, and a finely structured palate with good texture and a long finish. Many decent village and premier cru wines in Morey-Saint-Denis can be bought for rather affordable prices at the Morey-Saint-Denis boutique in the village center, near the grand cru Clos de Tart, which has unfortunately become very expensive.

The sheer elegance of Chambolle-Musigny cannot be denied. In his 19th-century classification of Burgundy wines, Jules Lavalle wrote that it produces “the most delicate wines of the Côte de Nuits”. Some attribute the silkiness of Chambolle-Musigny to its lighter limestone soils. The better wines, however, are not only delicate but also substantial on the palate. Jacques Lardière has been making wine for Maison Louis Jadot since the 1970s. When we sampled a grand cru Clos Saint-Denis from Morey-Saint-Denis and compared it to his Musigny Grand Cru, the difference was clear. Coming from 90-year-old vines, the Clos Saint-Denis exuded perfume and power, almost too tannic today to appreciate. The Musigny was both rich and elegant—indeed more giving.

One of the best producers in Chambolle-Musigny is the Domaine Jacques-Frédéric Mugnier. As we tasted 2009 samples, owner Frédéric Mugnier described his premier cru Chambolle-Musigny Les Fuées: “It comes from vines just next to the Bonnes Mares Grand Cru, in the northern part of the village, which, when compared to the southern parts [Le Musigny, Les Amoureuses] is not as flowery or fruity,” he said. “We have a more mineral tendency, a bit of Morey-Saint-Denis character, which is earthier,” he explained. “While Fuées is earthier, Amoureuses is more airy.” It was fascinating to discern differences within Chambolle-Musigny. The northern Bonnes Mares Grand Cru was somewhat closed, albeit refined, while the southern Musigny Grand Cru seemed far more expresive.

A closer look at Bonnes Mares reveals that while most of its vineyards lie in Chambolle-Musigny, a smaller part to the north is actually part of Morey-Saint-Denis. For many observers, including Wines of Burgundy author Coates, richer and deeper soils in Morey-Saint-Denis yield weightier wines, while finer and lighter terres blanches in Chambolle-Musigny result in a silkier, more perfumed style. But Jacques Lardière, who has made Louis Jadot Bonnes Mares for 25 years, threw a curve ball as we tasted at Louis Jadot. He said that until recently it included wines from both sections of the Bonnes Mares vineyards. “Our contract with the grower in Morey-Saint-Denis ended in 2006. Interestingly, since then the Bonnes Mares has become more virile than before, so for me the Morey part was actually the more subtle.”

It has been said that once you answer a single question about Burgundian terroir, ten more questions arise. The best way to understand and be enchanted by Burgundy is to visit the vineyards and taste. Ask questions about how the wines are made. And don’t forget that however any vintner or winemaker explains terroir, the winemaking and vineyard work also affect the taste.

Barrel samples from 2009 at Domaine Georges Roumier in Chambolle-Musigny were delicious. Roumier wines are often very good—and just as hard to find—even in lesser vintages, but buyer Gilles Mony, of the Paris boutique Au Verger de la Madeleine, describes 2009 wines as “pure and silky, with excellent body”. Similar reactions led to inevitable comparisons with the 2005 vintage—the last one that engendered such excitement. Jasper Morris, Burgundy specialist with London-based merchants Berry Bros. & Rudd, says 2009 was a “vintage of enormous charm”, but not as “tightly knit” as 2005. “Many 2009s will be ready for drinking before the 2005s,” he adds.

For some winemakers, the 2005 vintage is superior in terms of structure and longevity. Thierry Brouin of Domaine des Lambrays says 2009 Clos des Lambrays Grand Cru “is already drinkable, while the 2005 will be a longer distance runner”.

Philippe Prost of Maison Bouchard Père & Fils in Beaune calls 2005 “beautiful, but strict,” while he describes 2009 as “baroque” with higher levels of alcohol, lower levels of acidity and more immediate pleasure. Jacques Lardière at Maison Louis Jadot agrees, professing a slight preference for 2009, especially in Gevrey-Chambertin. “The best of the 2009 are exactly like 1959,” he says, citing a vintage renowned for its richness and intensity.

At Domaine Jacques-Frédéric Mugnier, Frédéric Mugnier calls 2009 a “great vintage, like 2005. The 2009 may not have the perfect balance of the 2005 but it seduces you more with its rounded aspect; it is very full-bodied and rich.” For Mugnier, 2009 has the staying power that defines a great vintage: “I cannot say which will last longer,” he adds with a smile, “but both will outlast me.”