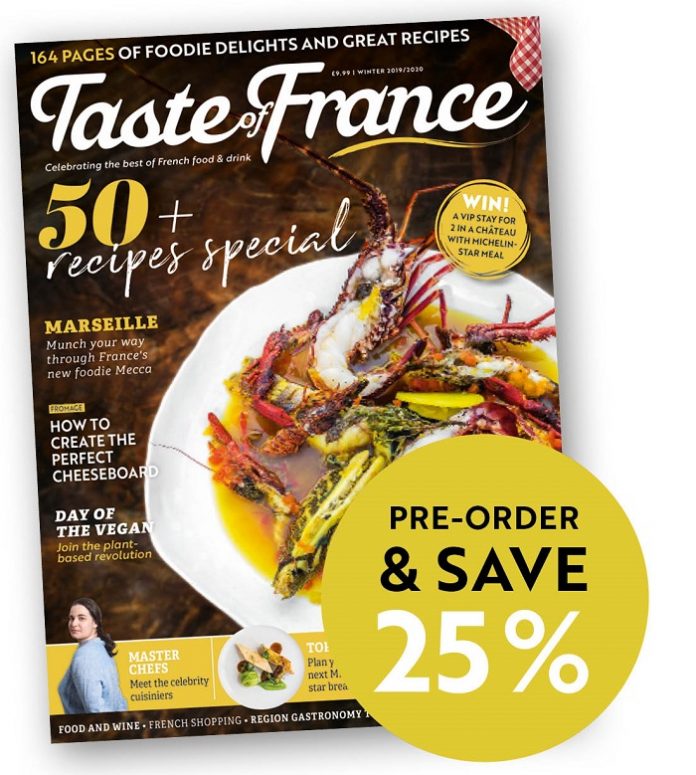 Pull up a chair and pour the wine – the countdown to the hotly-anticipated return of Taste of France has begun.

Readers hungry for the 2019 edition – due out this autumn – will find our second issue is packed with 50+ recipes, features and foodie insights from the very best the Hexagon has to offer.

Special guests include celebrity pâtissiers Pierre Hermé and Éric Lanlard, Michelin-starred chefs Julia Sedefdjian, Éric Fréchon, Thierry Marx and Gérald Passedat, and the World’s Best Pastry Chef 2018 Cédric Grolet, who between them will serve up something to suit every palate; from the hungriest culinary maverick to confirmed carnivores and adventurous herbivores… Gluten-free? Never fear, we’ve got you covered.

Alongside waistband-busting recettes, there’s plenty more to whet staunch foodies’ appetites. Our cracking band of writers and elite gourmands have hit the road, chomping their merry way through La Belle France in search of unique eateries, off-the-beaten-path gourmet hideaways and pioneering vignerons and producers – and they’ve returned with quite the haul.

From Brittany’s top food festivals, a peek at Provence’s most pampered piggies and a whistle-stop tour of France’s winemaking monasteries, to the rise of veganism and the barmy new trend of storing vin underwater, this issue we take a deep dive into the Hexagon’s weird and wonderful – but mostly weird – terroir and traditions.

Hungry for more? How about a step-by-step guide to the perfect cheeseboard, a scoffing spree around budding foodie mecca of Marseille, a rundown of the new campaign to save Paris’s endangered cafés, or a fun overview of the country’s fruitiest produce guilds? We are leaving no (cherry) stone unturned this time around…