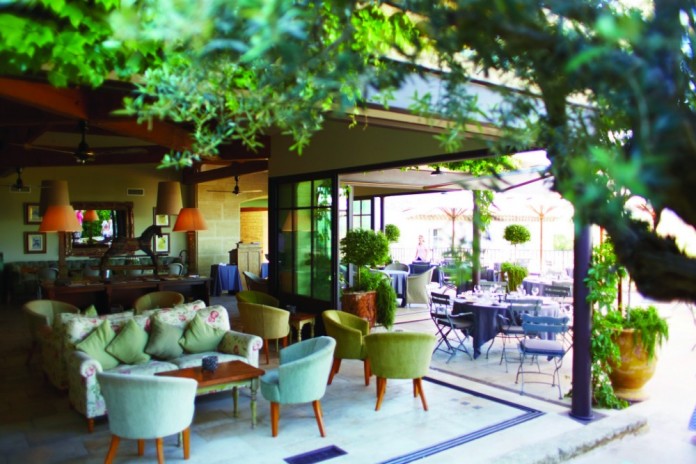 Located in the Vaucluse village of the same name, Hôtel Crillon le Brave is one of the most delightful hostelries in Provence. This eminent hostelry is celebrating its twenty-fifth anniversary this year and an excellent new chef has just arrived to take over its kitchens. Jérôme Blanchet, who most recently cooked at the Chantecler restaurant at the Le Negresco Hotel in Nice, says that he took the new post at Crillon-le-Brave to, “fly on my own wings [he was formerly a sous-chef] and also because the produce from the surrounding region is so spectacular”.

Aside from the pleasure of two gorgeous dining areas– the stone vaulted restaurant, which is only open for dinner, and a terrace with sweeping views over the surrounding countryside with the Mont Ventoux in the distance where breakfast and lunch are served – it is the assiduously local sourcing that makes Blanchet’s cooking so good. His menus change regularly, but the offer runs from dressed-up Provençale favourites, such as green asparagus with lardo di colonnata and Roquefort foam or herb-crusted rack of lamb, to more sophisticated dishes, including sea bass carpaccio with crispy snail and caviar and steamed turbot with a grey shrimp fumet seasoned with lemongrass.

There’s an excellent list of wines from the surrounding region, and the special twenty-fifth anniversary rosé made for the hotel by the Domaine du Tix in nearby Mormoiron makes for great summer drinking. Note that Hôtel Crillon le Brave also has a second restaurant, 40K Bistrot, its name referring to the fact that almost all of its produce comes from within a 40-kilometre radius of the hostelry. The 40K Bistrot offers a reasonably priced €40 prix-fixe menu from a chalkboard, which runs from good country food like a terrine of roasted vegetables and goat cheese to pork ribs braised in lavender honey.