Earlier this month, Hôtel Barrière Le Majestic launched “Paradiso Nicole et Pierre” across from the beach and the fabled Palais des Festivals in Cannes. The restaurant by Nicole Rubi and Pierre Gagnaire reflects the sparkling blue Mediterranean, Italy and the world of cinema.

“Dominique Desseigne (CEO of Group Barrière) was fed up with starred gastronomy. He was looking for something more convivial for the Majestic. He often came to eat in my restaurant, in Nice,” Nicole Rubi told L’Express magazine. “One evening, he suggested opening in Cannes. I said banco!” Subsequently there’s been a gentle evolution and season 2020 sees a new culinary collaboration with multi-Michelin star chef Pierre Gagnaire.

To understand Madame Rubi’s incredible Riviera saga, return to the source of her inspiration – her father César. In the 1960s he ran L’Univers Brasserie– located at 54, Boulevard Jean-Jaurès, Nice– now in the capable hands of Christian Plumail, where signatures included flambé spaghetti and where Nicole often helped out. From there, in 1988, it was just a hop and a skip to launching La Petite Maison de Nicole, in a former grocery store on rue Saint-François de Paule, near the Opera House and Cours Saleya market. Frequently papped dining there are Bono, Mick Jagger, Elton John, Robert De Niro, David and Victoria Beckham, Patrick Bruel, the Sarkozys, who can’t get enough of LPM’s bouillabaisse, truffle risotto, lobster tagliatelle etc. And, by the way, there are outposts in London, Dubai, Moscow, Beirut, Istanbul, and Miami.

Like Nicole Rubi, Pierre Gagnaire– born in Apinac, in the Loire region of France– claimed restaurant owners as parents. His brilliant career began as an apprentice learning the fundamentals of traditional cuisine in Lyon. In 1974, the young chef discovered the world of creative cuisine when working with the late, great Alain Senderens at Lucas Carton, Paris. To Gagnaire this revealed an entirely new way of looking at food and he later became arguably the first chef to combine his love of contemporary art and the creativity of food as art – like a painter.  He launched his own house in Saint Etienne (now shuttered) and then created an eponymous address on rue Balzac, opposite Hôtel Barrière Le Fouquet’s where he holds three Michelin stars. Hardly surprising then that he became friendly with neighbour Dominique Desseigne – the two frequently collaborate on matters culinary, with a mission statement ‘facing tomorrow but respectful of yesterday’.

The décor is by Milan-based architects and interior designers Tiziano Vudafieri and Claudio Saverino who have given “Chez Paradiso Nicole et Pierre” a bright, laid back, Mediterranean vibe. The walls recreate a Mediterranean map and movies filmed around the region, adding interest – a reminder of the deep links existing between The Majestic (since 1926) and the Seventh Art. See you there! 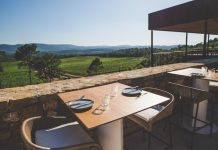 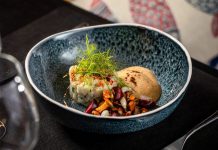 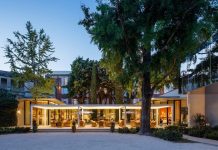