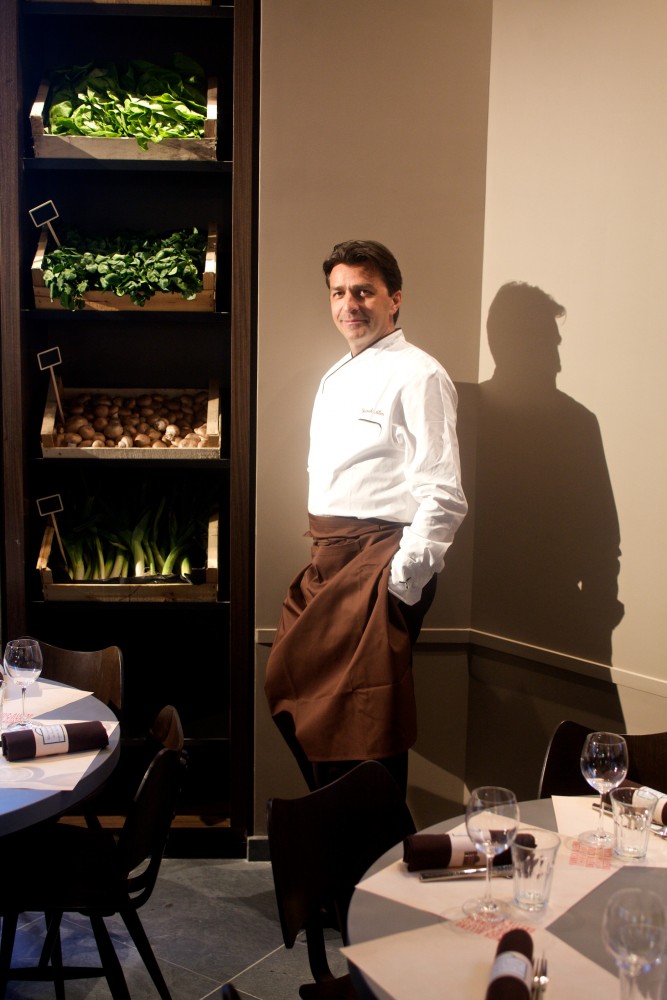 There’s something poignant about the locavore movement that’s currently gaining momentum in Paris, since it stirs up decidedly melancholy memories: the destruction of the beautiful Baltard pavilions of Les Halles, the transfer of Paris’s legendary central food market to the suburbs, and the wanton and often ugly urbanization of the Ile de France region over the decades since WWII.

The city had been nourished by the fields and farms of the surrounding Ile de France region for centuries, but today many younger Parisians have never eaten any truly local produce. Three years ago the Hôtel Meurice’s three-star chef Yannick Alléno set out to change that for a lucky few by offering a special menu of dishes made almost entirely with regional produce. The menu was a hit, and Alléno went on to publish Terroir Parisien, a beautiful and very interesting book combining history and recipes, making the case that French cooking was essentially born in Paris using local ingredients.

Now he’s gone a step further with Terroir Parisien, an excellent new bistrot in the Latin Quarter designed by star architect Jean-Michel Wilmotte that’s a postmodern interpretation of traditional bistrot decor. The mission of the blackboard menu here is to offer updated bistrot favorites made with as much seasonal local produce as possible. That may sound challenging, but a recent dinner displayed the surprising local bounty of Ile de France. I wasn’t completely convinced by Alléno’s dainty reworking of the famous cheese-capped onion soup once served in Les Halles, but star charcutier Gilles Verot’s cold cuts, including simple jambon de Paris, were sublime. So was a rich but delicate navarin d’agneau made with lamb from a breed native to Ile de France, raised by the Morisseau family in Aufferville, near Fontainebleau. Perfectly ripened brie de Meaux and a pear poached in honey from hives in the suburb of Saint Denis concluded a really good meal. If the kitchen was that good with the relative paucity of very early spring produce, I can’t wait to see what Alléno’s team will get up to during the summer with peaches from Montreuil and cabbage from Pontoise.