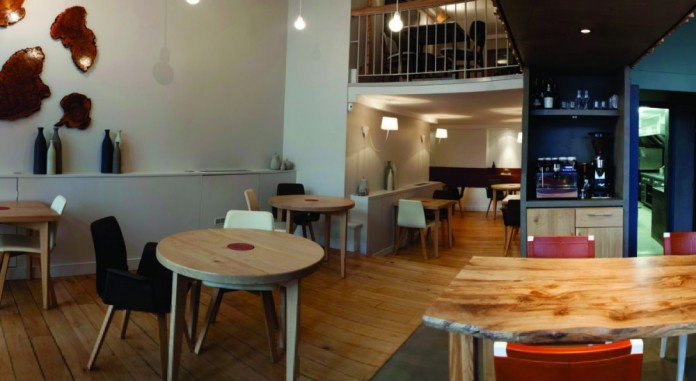 For me, as for many people, the décor of a restaurant plays second fiddle to the quality of the food served, but I couldn’t help but being fascinated by the appearance of the dining room when I stepped through the door of David Toutain’s new restaurant, on a quiet side street on the Left Bank, when it opened just before Christmas.

Toutain, 32, has blazed one of the most impressive careers of any young chef in France. He worked in the kitchens of Alain Passard (Arpege), Bernard Loiseau and Marc Veyrat, and also did stints at Mugaritz in Spain and Corton in New York City, before he debuted as head chef in Paris during 2011, at the tiny l’Agapé Substance in Saint-Germain-des-Prés, to rave reviews. After a year and a half there, he took off to travel the world, and then returned to Paris to launch this restaurant, his first.

At first glance, the room was very sparse, with bare plank floors, ecru walls decorated with varnished slices of a tree, and light bulbs dangling from long wires overhead. But the smooth oak surface of the table I was shown to made me want to touch it, and the tan leather-upholstered armchair was comfortable and equally tactile. Overall, the room looked like a cross between a Japanese auberge and a Shaker parlour, and this planed-down interior turned out to be a perfect preview of the meal that followed, since it’s such a carefully studied study of the inherent beauty of nature.

Toutain announced his love of vegetables with a pair of roasted salsify roots that the austere young waitress instructed us to dip in the white chocolate cream on the same plate. I frankly wasn’t expecting much, but the cocoa butter pleasantly anointed the vegetables and its sweetness delicately amplified that of the roots. After this gentle dish, the tasting menu teasingly became more and more interesting, with a succession of exquisitely imagined and prepared dishes, including an oyster in kiwi foam, foie gras with creamy potato bon-bons in potato-skin broth, shaved squid in soy milk with Parmesan gnocci and a surprising dessert of candied Jerusalem artichokes with an ice cream made from the same vegetable.

Though these tasting menus – there’s no à la carte here – will be best appreciated by adventurous diners, this is one of the most exciting restaurants in Paris right now, and if Toutain is this good within a few months of opening, there’s no doubt he’ll get even better in the year to come. Advance reservations are essential.