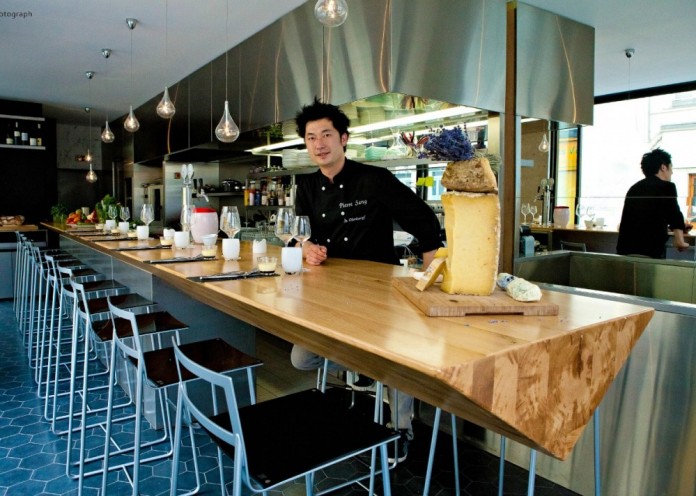 Although it’s a major inconvenience that Pierre Sang in Oberkampf, Franco-Korean chef Pierre-Sang Boyer’s dauntingly popular small-plate, table d’hôtes-style restaurant in the 11th arrondissement doesn’t take reservations, his nervy and very inventive cooking is good enough to warrant the necessary effort required to score a table here (arrive early). Ever since it opened in June, it’s become such a neighborhood favorite that many locals come every other night. What tantalizes them are dishes like sea snails with chopped radishes and lentils, or sautéed foie gras in a deglazed sauce with honey, vinegar and pomegranate grains. A composition of wild asparagus, green beans, Cape gooseberries and Parmesan offers a fascinating spectrum of tastes and textures.

Working with often offbeat and strictly seasonal ingredients, Boyer’s cooking is light, vivid and influenced by the aesthetics and umami-loving kitchens of Asia. Two perfect examples: a bright green sorbet of baby peas with wasabi and fine shavings of white asparagus, and herring with sour cream, potatoes and cauliflower. There’s also an excellent selection of wines served by the glass. This intriguing restaurant offers an interesting window on the creative ferment in one of Paris’s up-and-coming young neighborhoods, and on the cosmopolitan way in which contemporary French cooking is evolving.