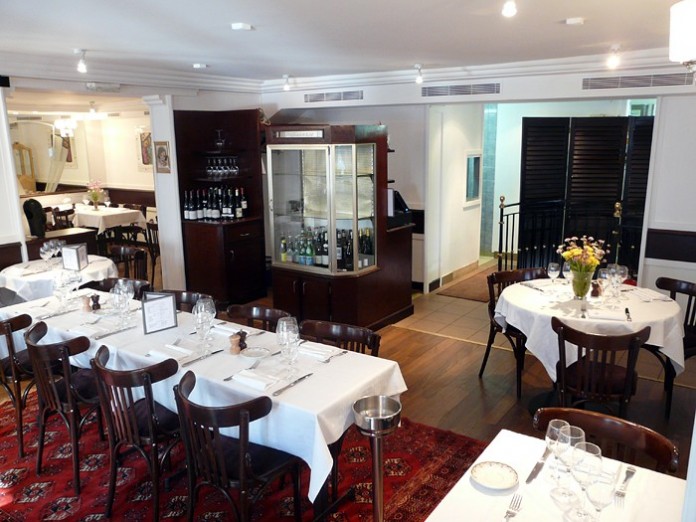 A note from Anne Surcouf recently let me know that she and her husband, chef Hugues Gournay, had opened a new restaurant, Le Sâotico, in the rue de Richelieu. Ten years ago, I was a regular at their terrific little Latin Quarter restaurant Le Reminet—then they sold it, and disappeared. So it was with real anticipation that I headed to their new place for lunch—for the moment, in this strictly business district, they’re open from 8 am–7 pm, and say they might open for dinner one or two nights a week starting sometime this fall. Given the Portuguese-sounding name, I wondered if I’d find some sort of fusion cooking, but no, as Surcouf explained, sâotico is a type of gray shrimp found in the waters off the Cotentin peninsula in Normandy, their home turf. The menu turned out to be a terrific tour de force of the first-rate cuisine du marché that made Le Reminet such a favorite. Settling in at a table in the handsome two-story space, we were delighted by our starters, a gâteau of sautéed eggplant, heirloom tomatoes and feta; and a mix of seasonal vegetables with mozzarella. Not only delicious but impeccably prepared, both dishes displayed Gournay’s insistence on using only first-rate French produce and his considerable prowess as a chef. Our main courses were outstanding as well—a large tender squid stuffed with diced vegetables and served with rice pilaf; and wild lieu jaune (yellow pollack) with lime and a garnish of baby vegetables that included leeks, celery root, carrots and shitake mushrooms. For dessert, we shared a superb homemade feuillantine filled with raspberries and lemon cream. Conclusion: Gournay is one of the best under-the-radar chefs in Paris today, and I can’t wait until it’s open for dinner.

Originally published in the October 2010 issue of France Today