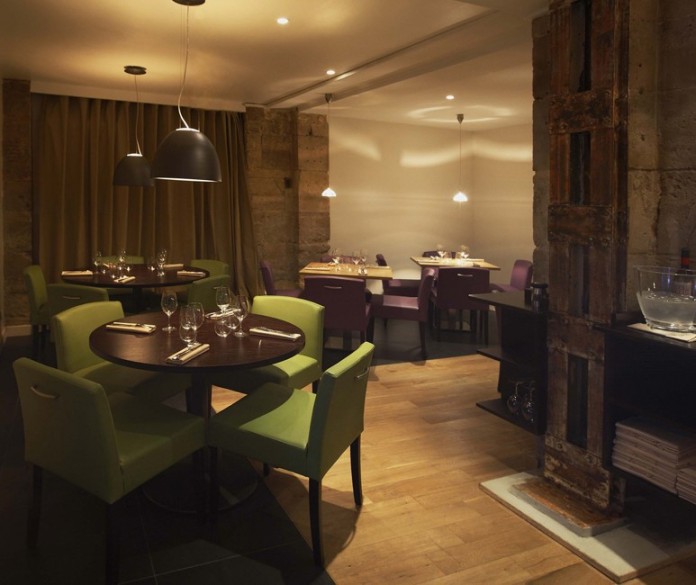 One of my recurring quandaries is the perplexingly frequent triumph of gastronomic mediocrity. Why is it, for example, that a thoroughly indifferent Italian restaurant in the last block of the rue du Bac soldiers on, when Claude Colliot, a talented chef I first met when he opened Le Bamboche, just around the corner from that tatty trattoria, later went without a restaurant of his own for more than ten years? Do more people really want to eat reheated parboiled pasta than sample the sometimes challenging cooking of one of Paris’s best dark-horse chefs? Perhaps I’ll have an answer soon, now that his new Restaurant Claude Colliot has opened in the Marais. I hadn’t really thought about Colliot’s cooking for a while; his last stop was a not entirely successful hotel-restaurant near the Porte Maillot, so it was fascinating to encounter him almost anew at this good-looking dining room with exposed stone walls and comfortable contemporary furnishings.

As can be seen in a dish like grilled scallops with egg yolk, anchovy paste and carrot slaw, the axis on which Colliot’s cuisine turns is his produce, precisely cooked and carefully garnished to enhance its natural flavors. A follow-up of sweetbreads with carrots and finely grated ginger was just as good. Even if everything on his menu doesn’t work—some dishes are almost too mathematically constructed to be much fun—I’ll sure be going back for more.

Originally published in the February 2010 issue of France Today