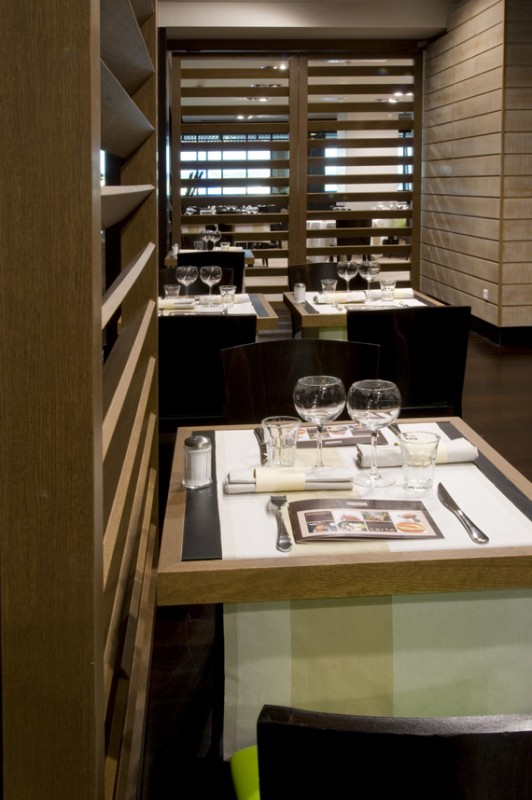 I’ve been a big fan of chef Nicolas Le Bec ever since I first discovered his cooking ten years ago, during his brief stint as chef of the restaurant in the Cour des Loges hotel.  Le Bec has found a very personal way to be inventive without resorting to silly bells and whistles like napping everything in foam or decorating the plate with tiny tufts of cotton candy. Instead, his well-reasoned cooking is honestly innovative—witness the veal sweetbreads with a bergamot condiment that he serves at his eponymous restaurant in Lyon—and always backed up by a profound knowledge of and respect for classical French cooking. So I was delighted to learn that Le Bec has been selected as the chef for the new restaurant slated to open in the Paris Opéra Garnier at the end of 2009, and also keen to try his latest project, L’Espace Nicolas Le Bec, at Lyon’s Saint Exupéry airport. Sure enough, Le Bec has really spread his wings at this new place, which is good enough so that more than a few Lyonnais drive out to the airport for a meal even when they don’t have a flight to catch. Open seven days a week, the vast airport restaurant not only serves up some amazingly good food—I loved my giant shrimp in a sauce of palm oil, cashews and coconut milk, and the papillote de coquillages—shellfish cooked with lime and curry in a parchment pillow—while a friend raved about her breast of veal served with homemade frites and creamed lettuce. Now if only Aéroports de Paris would take a cue from this smart move in Lyon and bring a similarly talented Parisian chef or two out to Orly and Roissy!

Originally published in the October 2008 issue of France Today