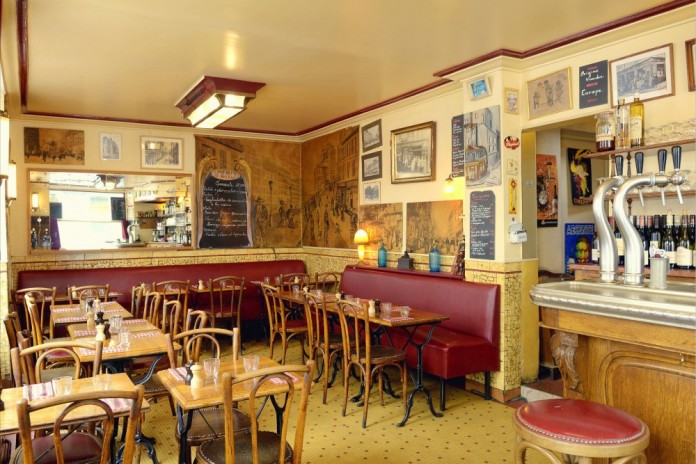 Sometimes there seems to be a serious mismatch between the ambitions of Parisian restaurateurs and what millions of people around the world hope to eat when they come to Paris: bona fide, old-fashioned bistrot cooking. For many reasons—it’s time-consuming to prepare, many Parisians would rather eat in a lighter, more contemporary vein—it gets harder and harder to find good, traditional French food. That’s why Le Temps des Cerises in the Marais was such a terrific recent discovery. When I first spotted it, my immediate reaction was that no place as pretty and well preserved as this little 18th-century house, with a red and gold, picture-perfect mosaic facade and geraniums in its second-story window boxes, could be anything but a tourist trap. The minute I stepped through the door, however, I knew I was wrong, since serious and sincere young restaurateur Grégory Detouy was so welcoming.

Brébant adds a few lighter contemporary dishes too: lamb marinated in lime juice with spices, for example, or salmon steak with sage and a Port-vinegar-spiked cream sauce. Craving a classic bistrot feed, I was delighted with my starter of smoky Morteau sausage and warm potato salad, followed by a steak with delicious homemade frites, while my tablemate was equally pleased by eggplant caviar with seared tuna, followed by salmon.

Detouy pours a nice selection of reasonably priced wines by the glass, carafe and bottle, which makes a meal here a terrific buy, especially for the Marais, an area lamentably oversupplied with places like the wine bars Glou and JaJa, which add insult to injury by being mediocre as well as overpriced. Le Temps des Cerises is open on Sunday, too.