Founded in 1903, L’Auberge du Père Bise, the lovely inn on the shores of the sapphire-coloured waters of the Lac d’Annecy in Talloires, has undergone a handsome and very urbane renovation since talented young chef Jean Sulpice bought the property last November. “As soon as I heard it was for sale, I knew I wanted the challenge of writing the next chapter of one of the most famous auberges in France,” says Sulpice, 39, a native of nearby Aix-les-Bains who trained with Marc Veyrat for five years. Sulpice, who had already won two Michelin stars for his eponymous restaurant in the Val Thorens ski station in the Alps, is one of the rising stars of a generation of talented new French chefs.

When I mentioned to friends that I would be heading here for lunch, their response was almost always the same: “Oh, such a lovely place, haven’t been there in years.” I hadn’t either, actually, so I was very curious as to what Sulpice might do with the kitchen here. Would he keep such classics as the Bise family’s gratin de queues d’écrevisses (crayfish tails au gratin) and poularde de Bresse à l’estragon (Bresse chicken with tarragon)? Or would he strike out on his own without deference to the auberge’s culinary heritage?

In the end, he’s done both, since the cooking here is nervy, incisive and witty – in keeping with the way that other young chefs of his generation are rebooting French terroir (Alexandre Gauthier at La Grenouillère near Le Touquet comes to mind). It’s also subtly respectful of the gastronomic heritage of a place that had existed for over a century before his new stewardship. “Today gastronomic pleasure is created differently than it was 50 years ago. It’s no longer a story of foie gras and lobster, it’s about discovering foods that are profoundly fresh and local and cooked in a way that surprises you and creates emotion.”

The best way to discover Sulpice’s cooking is to order the eight-course €200 Horizon menu. At a recent lunch, it began with an assortment of elegant canapés – trout eggs in a miniature fried-potato basket, smoked-beef tongue and beets, and a tiny buckwheat biscuit topped with wild herbs, and then segued to a first course of smoked eel topped with grated fried potato and caviar in a pool of watercress purée that was deeply herbaceous but also vividly tangy from the use of white vinegar.

This dish also carried the recurring themes of Sulpice’s style, especially his use of smoke as a condiment, his love of bitter herbs as gastronomic punctuation and his affection for acidulated tastes.

Other memorable dishes in a memorable lunch here included a delicate filet of omble chevalier – the prince of Alpine lake fish, appreciated for its very delicate flesh – in a light sauce seasoned with a violette infusion that was initially alarming but ultimately rather charming, steak smoked in juniper boughs with a salad of bitter wild herbs, feather-light ravioli containing tender snails and herb butter brightened by white vinegar, and a superb dessert of chocolate, blackcurrant purée and parsley emulsion. 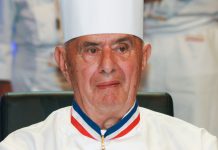