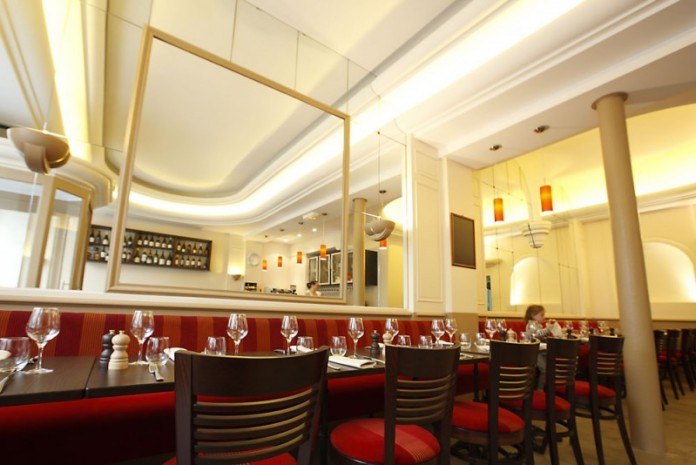 It seems unfair, because current chef Bruno Doucet is a major talent, that La Régalade sort of slipped under the international radar when founding chef Yves Camdeborde sold it and moved to the Comptoir du Relais in Saint Germain des Prés. One reason may be that during the Camdeborde decade it was so tough to get a table many people just stopped trying. Another is that the original address is fairly far out in the 14th arrondissement. It’s easy, though, to discover what you’ve been missing now that Doucet has opened a second address, La Régalade Saint Honoré, near the Louvre. I’ve eaten my way through almost the entire menu and every meal in this spare white shop front dining room has left me looking forward to the next one, especially because the fixed price €35 menu is one of the best buys in Paris. Among the starters, Doucet’s chicken-broth-and-coconut soup with shrimp and angel hair pasta is an instant favorite, and both the vegetable lasagna with prosciutto and the marinated salmon are excellent too. Main courses are generously served, perfectly cooked and imaginatively seasoned, including cod steak demi-sel with wilted spinach, tiny croutons and finely chopped tomato, and a luscious paleron de veau à la Provençale, chunks of veal stewed in a light tomato-based sauce. Desserts, including rhubarb compote with cream, are a pleasure too. The only hiccup I’ve found is the short and mostly uninteresting wine list, although there’s a Jurançon Sec that makes for pleasant drinking.

Originally published in the July/August 2010 issue of France Today; updated in December 2011