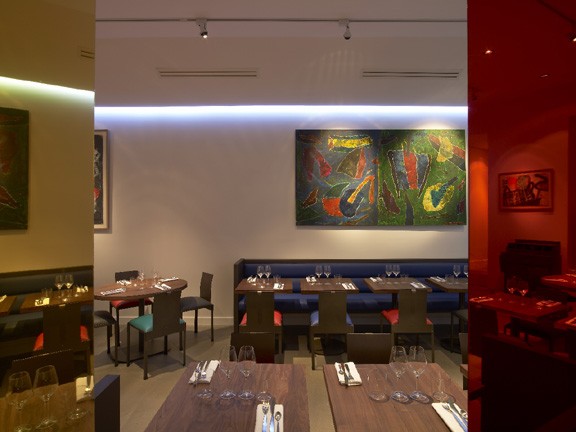 I’ve been a major fan of chef William Ledeuil ever since I first discovered his cooking at three-star chef Guy Savoy’s baby bistrot Les Bookinistes well over a decade ago. After Ledeuil moved a few doors up the street and opened Ze Kitchen Galerie, I liked his cooking even more, but I didn’t go often because rising prices—and a Michelin star—pushed this very good restaurant out of the moderate dinner-with-friends bracket in which I do most of my eating.

So I was delighted to discover Ledeuil’s new annex, KGB (Kitchen Galerie Bis), a colorful contemporary bistrot with lower prices and a simpler but no less delicious menu. Ledeuil also offers a different take on the Asian-influenced contemporary French cooking that’s made his reputation as one of the most inventive chefs in Paris.

The KGB menu begins with hors d’oeuvres, served as two, four or six snapshots of his vivid, graphic and absolutely delicious cuisine, maybe panko-coated shrimp-and-chicken croquettes with piquillo pepper ketchup, or white bean soup with galangal, or Wagyu beef tartare with carrot-ginger jus. Next, a choice of pasta, meat or fish, including dishes like capeletti with a fried quail’s egg, shavings of mimolette cheese, green-olive tapenade and an Asian pesto sauce; or slow-cooked pork ribs and grilled potatoes in a hoisin-shoyu marinade. Up to now, desserts haven’t been Ledeuil’s strong suit, but his apple cappuccino with ginger ice cream and a peppery gelée of mostarda di Cremona was the best dessert I’ve had so far this year.