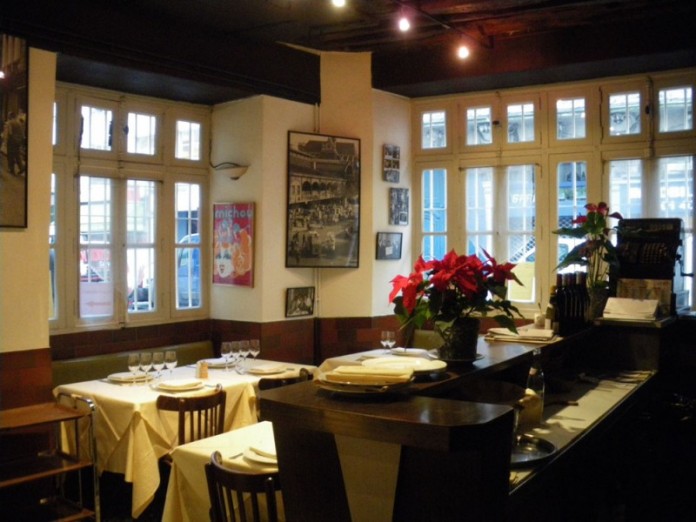 It was a real heartache to learn that Chez la Vieille, one of the rare traditional bistros left in central Paris, had changed hands. Not only did the original vieille (old woman) Adrienne Biasin memorably pinch my cheeks the first time I ate there, she gifted me with a lifelong love of cuisine ménagère, the simple but delicious dishes cooked by housewives. When Biasin retired, the restaurant continued under Marie-Josée Cervoni, a warm Corsican who perpetuated the house traditions. Now, however, the only things that recall the restaurant’s almost fifty-year era are the name and the fly-in-amber decor. The new owner has hired the talented—and dramatically peripatetic—chef Michel Del Burgo, ex-Le Bristol, ex-Taillevent, ex-Le Chantecler in Nice, and most recently, ex-l’Orangerie. Del Burgo is serving impeccable cuisine bourgeoise, that high-collared cooking once found in a particular category of restaurants—including Le Vert Galant and Le Récamier-that have almost entirely disappeared from the gastronomic landscape of Paris. Even though the setting of a storied bistrot in Les Halles makes an odd backdrop for such food, his cooking—save for an oxtail starter that was too fatty and cartilaginous on my initial visit—is very, very good. In fact every time I go, it gets better, too. I still think longingly of beautifully seared duck foie gras with “forgotten” vegetables in a light port sauce; grilled scallops in buttermilk foam with an intriguing garnish of endives and fresh hazelnuts; and chocolate moelleux cake with pecans and salted-butter caramel sauce-all of which I had here recently. Although I’ll always regret the loss of old Chez la Vieille, it’s a pleasure to rediscover the almost extinct delights of cuisine bourgeoise via Michel Del Burgo’s generally fine cooking.

Originally published in the April 2010 issue of France Today